I was amused to see this pop up on the Stack Overflow home page a few days ago: 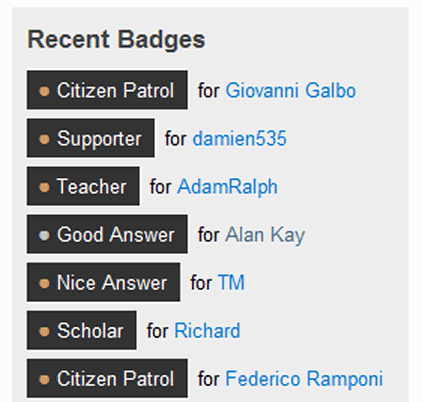 If you don’t know who Alan Kay is, first of all, shame on you — he’s one of the most important figures in modern computing:

Kay is one of the fathers of the idea of object-oriented programming, which he named, along with some colleagues at PARC and predecessors at the Norwegian Computing Center. He conceived the Dynabook concept which defined the conceptual basics for laptop and tablet computers and E-books, and is the architect of the modern overlapping windowing graphical user interface (GUI). Because the Dynabook was conceived as an educational platform, Kay is considered to be one of the first researchers into mobile learning, and indeed, many features of the Dynabook concept have been adopted in the design of the One Laptop Per Child educational platform, with which Kay is actively involved.

I had previously remarked on Twitter that, while browsing Stack Overflow, I noticed that Alan Kay responded to a question about him. It looks like a few people took that opportunity to vote his response up. So did I.

Now, it’s likely that Alan was just responding to an automated web search alert for pages containing his name; I have these set up too and I do the same thing from time to time. (Although I desperately try to avoid being an internet-era Beetlejuice who appears in a magical puff of smoke whenever his name is invoked three times.) It’s likely, in my opinion at least, to be the real Alan Kay. He has been known to reply in blog comments in the past.

So, if you’ve ever wondered if there are famous developers using Stack Overflow, indeed there are! Short of Knuth himself posting, Alan Kay gets my vote for being the most famous participant so far.

Thanks for stopping by, Alan — and as always, it’s encouraging to see someone of your stature still actively engaging with the community. Oh, and enjoy that silver Good Answer badge. I’d say you definitely earned it.