I mentioned in the last podcast that I wasn’t sure how the two-drive RAID mirroring was supposed to work in the Lenovo RS110 1U servers we bought. 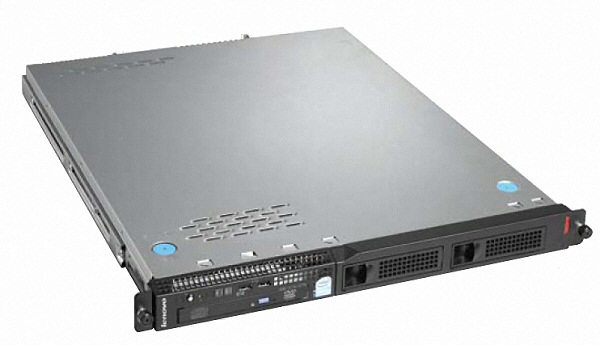 This server comes with a mini-PCI RAID card as standard equipment, the LSI 1064E. To set it up, I did the following:

The good news is this worked fine. The system kept humming away with the one good drive it had left, which is the goal of a mirrored drive array. I’ve done this test with both the first and second drive; works either way. So far so good!

However, when I reinserted the drive, the system bluescreened. Doh! That’s the bad news.

I assumed this meant the system needed to rebuild the drive from the MegaRAID BIOS utilities. So I rebooted, pressed CTRL+C to enter the MegaRAID BIOS utility during the boot sequence, and began resyncing the 500 GB mirrored array. Resyncing from the BIOS took about four hours. After rebooting, I was up and running again, but having four hours of downtime to replace a failed drive is, uh.. pretty bad.

Well, this time I decided to reboot the system as-is after the eject, ok, reinsert, doh! cycle.

The server booted the OS fine. I entered the MegaRAID manager, and lo and behold: the array was indeed rebuilding, all on its own! Very very slowly, but still! 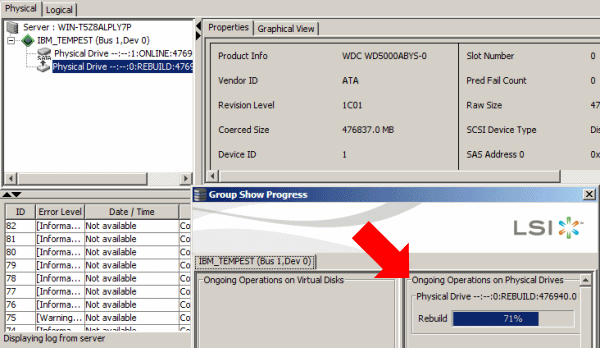 I had jumped to the conclusion that live rebuilds were impossible when I inserted the new drive and it bluescreened. Looks like the real restriction is that you can’t hot swap a failed drive — you must shut down, swap out the drive, and then reboot.

Of course this kind of “live” mirror rebuild takes a heck of a lot longer — 8 hours or more in my testing. And during the rebuild, disk performance is pretty much in the toilet, as you’d expect. The RAID controller has to copy 500 GB of data from the good drive to the new mirror drive.. and on top of that, copy any data that changed during the copy, too. On some level it’s amazing this stuff works at all.

Requiring a reboot isn’t optimal for failed mirror drive replacement, but it sure beats the heck out of 4 hours of downtime!