In case you were wondering, no, we haven’t forgotten about the Hacker Badge. Which is sort of like Eric Raymond’s universal hacker emblem. 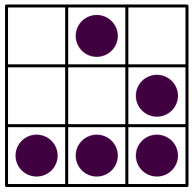 When you put the glider emblem on your web page, or wear it on clothing, or display it in some other way, you are visibly associating yourself with the hacker culture. This is not quite the same thing as claiming to be a hacker yourself — that is a title of honor that generally has to be conferred by others rather than self-assumed. But by using this emblem, you express sympathy with hackers’ goals, hackers’ values, and the hacker way of living.

Not everyone is a fan.

That’s just background. I’m specifically referring to the secret Stack Overflow hacker badge. It does exist, though it has yet to be awarded. (There might even be some other secret badges out there.. who knows?)

It’s just taking a while to get around to implementing it*, as it doesn’t behave like any other badge; it’s a manually maintained key-value pair of users who have “contributed to Stack Overflow in an unusual way.” Typically this means you’ve found a serious security exploit and sent it to us privately rather than making it public or exploiting it and harming the site. But that’s not the only way to earn it!

In other news, there will be no Stack Overflow podcast this week because Joel has the flu. There are lots of other great software podcasts out there to fill that gap, though!