You’ll notice that the top 5 comments are now shown under each question or answer. 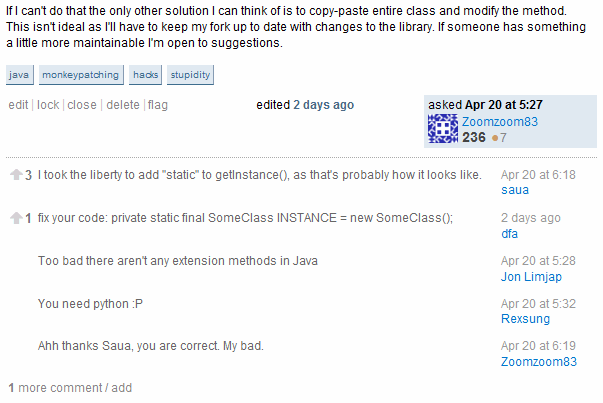 If you want to see all the comments, or add a comment of your own, clicking will load the rest and reveal the comment entry box. The flagging and voting tools are still there for each comment, but require a Twitter-style mouseover to reveal. We did this to reduce visual clutter.

We laid the groundwork for this change last week with voting, as I alluded to at the bottom of that post.

This is setting the stage for some of the comments to be visible on the page at all times, without having to click the comments button.

There was a grander plan with comment voting, and that plan was to promote some of the best voted comments to the question page. The default sort order is votes, descending, then date; we pick the top 5. Why did we do this?

So we’re now promoting the top 5 comments under each post to the question page itself.

Based on feedback in this thread, we made the following changes to comments:

We didn’t get to the user preference yet, but it’s coming.