Remember the awesomeness that was Stack Overflow DevDays? 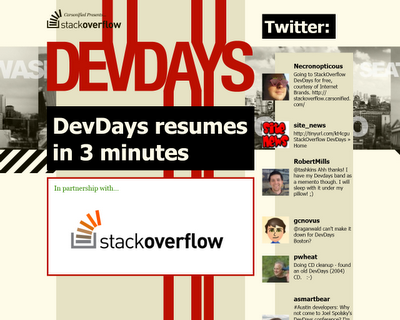 If you’re coming in late… last fall, we took Stack Overflow on the road to ten (10!) cities with awesome one-day conferences. Over 4000 people attended to hear tutorials on  jQuery, ASP.NET MVC, Python, iPhone development, and some other topics which varied from city to city. It was tiring, but a lot of fun.

Well, people keep asking Jeff what’s up with DevDays 2010, and Jeff keeps pestering me to write a blog post so that he can just reply with a URL instead of needing to explain the whole story. Here is that URL.

DevDays was awesome, a lot of fun, a ton of work, and something we just don’t have the time (or energy) to do again in the same format. $100 was way too cheap. We had to cut so many corners the to get the cost down that low that the logistics were a dog’s breakfast. My original thought of a touring troop of five or six speakers going to ten cities proved to be impossible… it was hard enough getting speakers to do one or two cities each, so I had to line up about 60 speakers when I was really just hoping to need 5. Essentially, DevDays took three months of my full time attention, and we’ve got too many other things to do this year to do that again.

So here’s the plan. From now on, instead of 10 little cities, we’ll try to get it down to four much bigger ones. I’m thinking East Coast, West Coast, Australia, and the  UK. Instead of a cheapo one day conference, we’ll do something a little bit more substantial (maybe 2 days) and at a much more sustainable price. Instead of me doing everything, we’ll find some way for the community to help plan the agenda, especially when it comes to choosing speakers. And, ultimately, that probably means that we’re looking at Spring 2011.

(By the way, if you know of someone who you think would be an AWESOME tech conference organizer, please bring them to my attention!)