Q&A site for experts and advanced users of web applications.Web Apps was one of the hottest proposals from the earliest days of Area 51 so there’s little doubt that this site will be huge. After a one-week private beta, the site was release to the public earlier today.

We’ve already received coverage on LifeHacker — Web Apps is a Q&A Forum for Web Application Enthusiasts. I don’t think I can sum up our enthusiasm any better than they did:

“Web Apps runs on the same engine and is developed by the same folks who unleashed the incredible Stack Overflow on the world, and if Web Apps is as helpful for advanced web users as Stack Overflow is for programmers, it’s definitely a site worth bookmarking.”

Come check it out while low user numbers are still available! 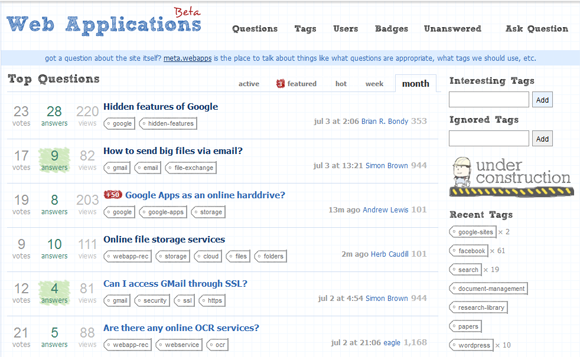