We’re pleased to announce that ubuntu.stackexchange.com, in partnership with Canonical, Ltd, has become Ask Ubuntu. 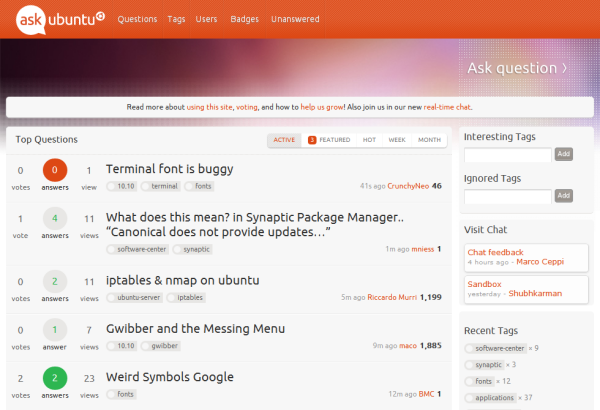 We’re excited to see this come to fruition, because:

I have to admit that I voted strongly against having both Unix/Linux and Ubuntu sites, but I deferred to the overall votes not to merge both inside and outside the company. We collectively said Fork It. It’s clear now that given the strength and self-identification of the Ubuntu community, they are the exception that proves the rule.

Honestly, we get approached a lot for partnerships like this, but they don’t usually go anywhere because we require ceding so much control back to the community. It is rare indeed to find such a complimentary relationship — and we hope this one is beneficial to Ubuntu, our network, and the internet community at large.

But, as always, you be the judge. Be part of the community that governs the site:

Tommy McClung, cofounder and CEO of ReleaseHub, sits down with the home team to talk about environments-as-a-service, what it’s like to work with the same cofounders for more than 20 years, and the role of karma in professional networking.