Did you notice anything different about MSDN search lately? 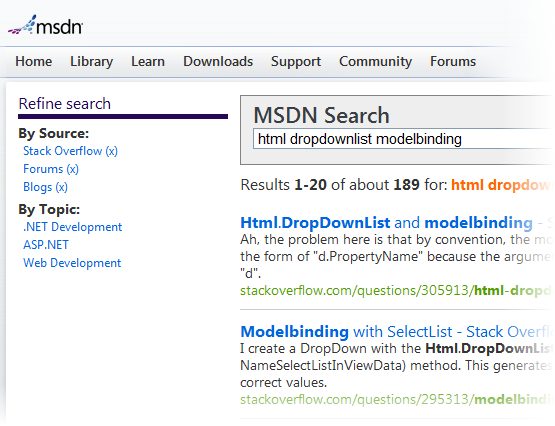 MSDN is Microsoft’s mega huge developer information portal, and we’re happy to announce that starting today, Stack Overflow search results will be incorporated into the results when you search for something on MSDN. That lets you see official Microsoft developer documentation alongside the community conversations that you need to actually make sense of the “official” developer documentation.

Let me just say that I have been using Microsoft developer documentation since the Windows 1.0 API. In those days it was a big .HLP file with one entry for every Windows API call, and searching on my Zeos 386SX was instantaneous. In the early 1990s MSDN first appeared (it predated the web by a few years), shipped as a subscription service on monthly CD-ROMs.

Now programming has gotten so complicated that the official documentation never tells you everything you need to know. So I think it’s just incredibly awesome that Microsoft has recognized that there has been a developer landslide from the vendor forums onto Stack Overflow. Give it a try!