The start of the new year brings with it another round of our Free Vote-Based Advertising for Open Source Projects. The ads from the last round have been retired to make room for new ads for the first half of 2011.

This is the third round of our program. For the past year, Stack Overflow has been providing free advertising to open source projects looking for programmers. The ads shown are fully driven by the community: user-created ads are voted on by our users.

The top-voted projects from the second half of 2010 each received approximately one million impressions. 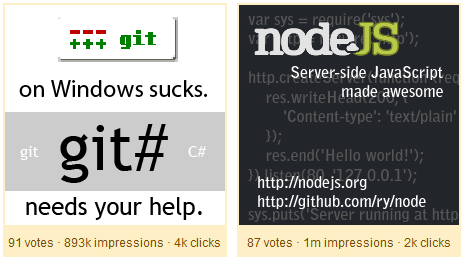 Stack Overflow is now regularly getting well over two million page views a day. This community driven program is a simple way to get your project some publicity.

So let’s get started with round three.

Each round of advertising runs for about six months. We have reset the voting and cleared the ads board for the first half of 2011. If you have an open source project that is looking for programmers, we know where you can find them, and the Free Vote-Based Advertisement for an Open Source Project is a great way for you to reach them.

Here’s how it works:

Throughout the next several months, you can visit the ad summary page, and mouse-over the ‘view stats’ link to see how each ad is doing.

So, fire up and create an ad to publicize your open source project!

Come back often to vote on new ads!