It’s really inspiring to see Stack Overflow meetup events being held in almost 100 cities around the world. Here’s where the meetup groups are: 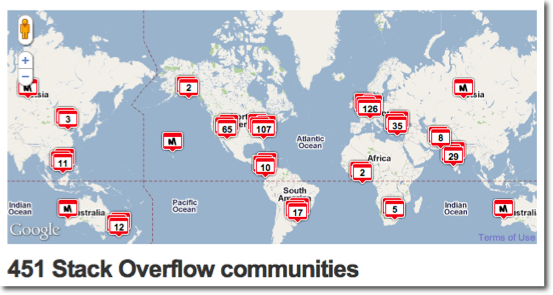 That made me think again about Stack Exchange in other languages. Now, Stack Exchange isn’t just software. Localizing it isn’t just a matter of translating the strings. It’s a community, so when we have a Stack Exchange site conducting Q&A in, say, Japanese, we’ll need moderators and community coordinators to liaise between that community and the company who speak Japanese.

I grabbed our Google Analytics data showing the number of visits we had from the top 30 countries in the last month, and compared it to the population of those countries to get the all-important Stack Overflow Country Ranking, that is, the number of visits we had per 1000 population. The winner? Sweden, with an incredible 71 visits to Stack Overflow per 1000 population.


Even though English is the de facto lingua franca of programming, the dramatic differences in how much Stack Overflow is used in various first-world countries almost certainly reflects linguistic demographics. In my experience, almost every programmer I’ve ever met from Scandinavia is pretty much 100% fluent in English. But the low participation from countries like Japan, where there are tons of programmers who don’t really like to work in English, makes me think that if we want to accomplish our goal of making the Internet better, we’re going to have to make Stack Exchange work for non-English speakers, too.

One thing we discovered early on about setting up new Stack Exchange communities is that they only work if you have a critical mass of experienced users who know how the system works. The Area 51 process is designed to insure that we only open sites for which we have a group of committed users. This process has worked well: so far we’ve opened 40+ sites of which only three failed. So when we open the first non-English site, it’s going to have to be pioneered by experienced, bilingual Stack Exchange users.

My guess would be that the most valuable local editions would be in Korean and Japanese, countries with a large community of programmers who are evidently under-served by English Stack Overflow, but we don’t do things based on intuition, here: we do things that you tell us to do. So we’re depending on you to tell us how we should launch versions of Stack Overflow in languages other than English. If you speak another language fluently and think that the world would benefit from Stack Exchanges in that language, propose them on Area 51. As usual, if you have ideas or suggestions or want to volunteer your services for how we can establish useful, thriving communities in other languages, bring them up on meta.stackoverflow.com. We’re listening!