Hi everyone! I’m the math intern, and I thought I’d introduce myself by sharing a little something from what I’ve been doing. A little about me: I’m a moderator and frequent contributor at math.SE:

In real life, I’m a rising senior at MIT. I have a math blog, Annoying Precision, which unfortunately is not very accessible to non-mathematicians (sorry!). I think using the internet to spread knowledge more effectively is great, so I’m a big fan of the Stack Exchange network. This summer, my job is to look at the Stack Exchange network’s data and see if I can find anything interesting.

One standard guess is that the numbers satisfy a power law. More formally, you might look at Zipf’s law: the number of users who post on n days should be proportional to 1/ns for some value of s. In many of the well-known examples, s is very close to 1, but as it turns out for the specific case of describing the frequency of contributions by individual authors, a special case of Zipf’s law called Lotka’s law suggests that s should be very close to 2 instead. So you should expect about 6,200 users posting on two days, 2,800 users posting on three days, 1,600 users posting on four days, and so forth. 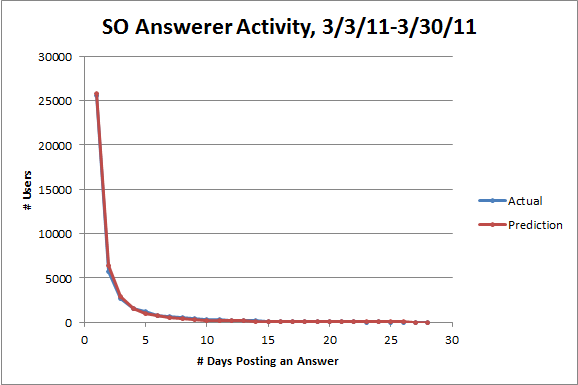 The fit looks great, but since the numbers decrease so quickly, it’s hard to be sure. The standard way to visually check if you’ve got a power law is to use a logarithmic scale on both axes. If there’s a power relationship y = c/ns between two variables, there’ll be a linear relationship log y = log c – s log n between their logarithms with slope -s. Here’s the same plot again with logarithmic scales: 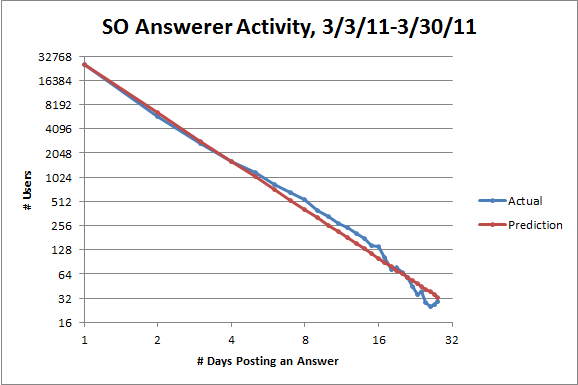 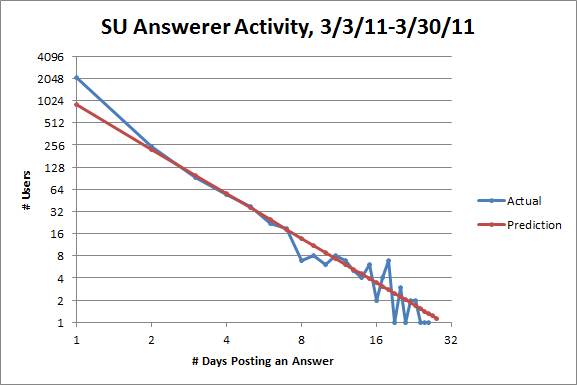 As for the former discrepancy, part of the problem is that SuperUser gets a ton of migrations from StackOverflow, and anyone who posted an answer before the question gets migrated counts as posting once, but that user might not ever visit SuperUser. That ends up accounting for about half the extra users posting on one day, but I think it’s also just easier to feel like you have something worth posting on SuperUser as opposed to StackOverflow.

That hypothesis is supported by looking at the same plot for math.SE: 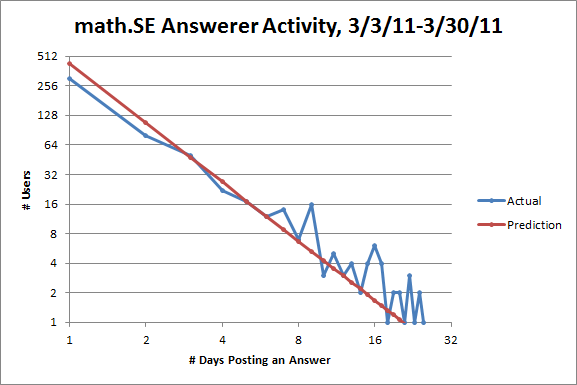 Just for fun, here’s the same plot for ServerFault: 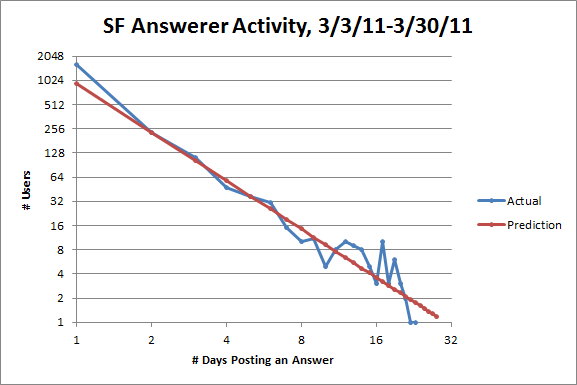 It looks like the SuperUser plot, but a little healthier.

The tails of the last three plots may look weird, but that’s because fluctuations caused by small sample size get amplified on a logarithmic scale. To get a larger sample size, let’s incorporate data from every 28-day cycle instead of just one (I was using these instead of months so they’d all be the same length): 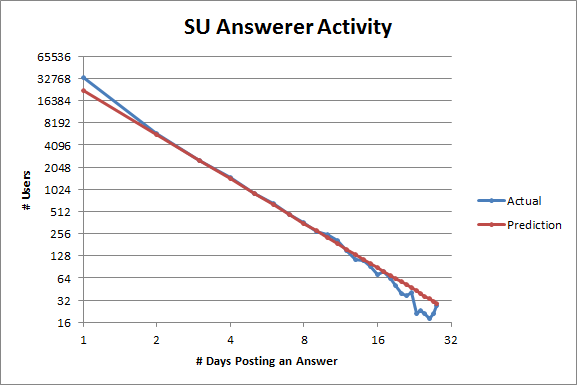 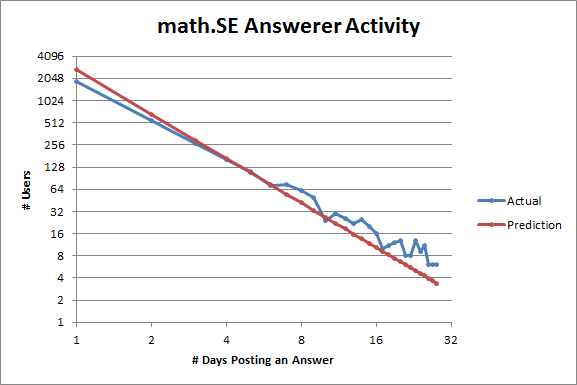 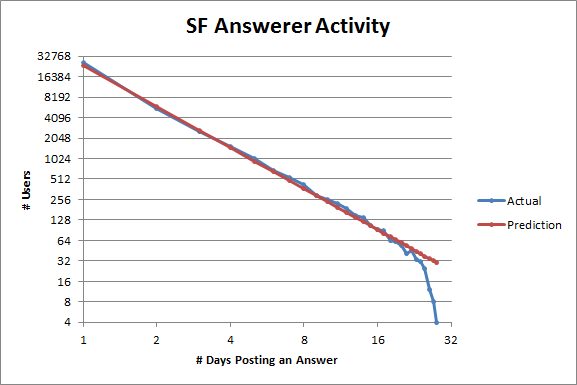 More or less the same patterns as before emerge, although ServerFault looks a little healthier now (and also fits Lotka’s law absurdly well). The corresponding plot for StackOverflow looks almost exactly the same, so I’m not including it.

I don’t have a good conceptual explanation for Lotka’s law. There are certain mathematical reasons why power laws are plausible in certain situations, but I don’t know of any good explanations of why certain values of s (like 1 in many examples and 2 here) seem to be preferred. However, given that Lotka’s law empirically appears to hold pretty well in this situation, I think looking at how a site deviates from Lotka’s law as above can give some useful information about how healthy it is.

Plus, it’s just convenient to have a compact description of the expected distribution of user activity. I’ll try to describe another interesting thing I’m looking at where it’s handy to have Lotka’s law around in a later post.