This Stack Overflow DevDays will be the best conference you’ll attend in 2011.  You’ll come away with in-depth knowledge of all the latest programming awesome like: Node.js, HTML5, CSS3, CoffeeScript, Cassandra, Hadoop, F#, UI design, Scalability and Performance.  Register today to ensure you won’t miss out on seeing these speakers and more!

UI Design at Square
**Speaker: Tristan O’Tierney
**Tristan is a Co-Founder and original iOS Engineer at Square, Inc. Before Square, Tristan worked on Yahoo! Messenger for Mac, Safari, VMware Fusion, Obama ’08 iPhone app, and the first location based twitter client Twinkle at Tapulous. He’s also well known for his online Objective-C tutorial and has enjoyed hacking on projects like FlickrBooth for fun in his spare time.

Compilers and Interpreters and JITs, oh my
**Speaker: Paul Biggar
**Paul works on the Javascript team at Mozilla. Before joining Mozilla, Paul completed a PhD in compiler optimizations, static analyses and dynamic languages, and started a YCombinator startup. 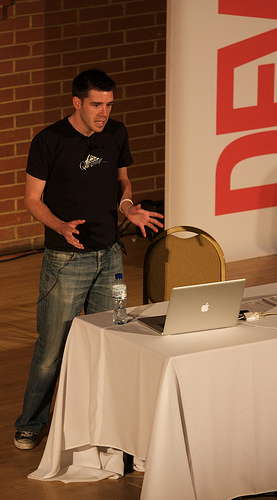 CSS in a post-IE6 world
**Speaker: Chris Darroch
**Chris Darroch has a passion for building kick-ass interfaces and user experiences. When he isn’t working on UIs, preaching web development standards and best-practices, or attempting to get his StackOverflow profile over 9000, you might find him vying for glory and epic lewts in World of Warcraft, or playing Guitar Hero on expert.

Finding Your Place in the World: Google Places API
**Speaker: Luke Mahe
**Luke is part of the Geo Developer Relations team at Google Sydney where he works with developers from all over the world that use the Maps JavaScript and Places API.

Brutal JavaScript: Traps, Hurdles, and Pitfalls
Speaker: Dmitry Baranovskiy
****Dmitry has over 10 years experience in creating web applications. Having started as a back end developer, more recently he has changed his orientation to front end development and even pure design. He is most notably known as a creator of Raphaël (http://raphaeljs.com) JavaScript vector library. 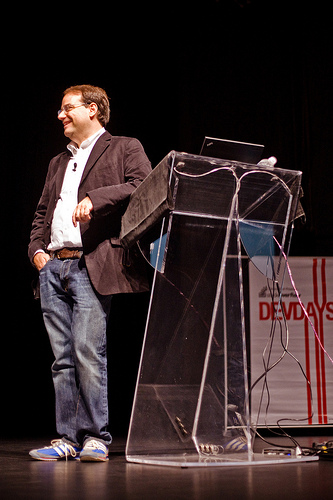 When the System is the Software: Operations for Developers
**Speaker: Jeff Lawson
**Jeff Lawson is CEO and Co-founder of Twilio, the technology company revolutionizing telecommunications with simple tools for programmatically making and receiving text messages and phone calls. Jeff brings over 12 years of entrepreneurial experience with product, engineering and business background to the company.  Jeff was awarded a 2010 TechFollows Award for Disruptive Innovation, and was named as number 18 on Business Insider’s 2010 Silicon Valley Top 100 List. Prior to founding Twilio, Jeff held founding executive roles for NineStar, Stubhub.com, and Versity.com.

Julian is Chief Architect at Equal Experts, a convivial services and consulting company that blends XP engineering practices with pragmatic designs. Despite longstanding frustrations with architecture practices in large companies, he finds his CV is full of architecture roles in large companies, mostly in the mobile and investment banking sectors. His mission in life is to make enterprise architecture the basis for developers to just make the magic happen. He codes and has never seen an ivory tower, let alone been up one.

The Combinator Approach to Creating Domain Specific Languages with F#
**Speaker: Robert Pickering
**Robert is a fun loving programmer who claims that he is Falling Outside The Normal Moral Constraints. He enjoys travelling round Europe in a big shirt trying to teach people that real programmers use the stack. Robert is a big fan of functional programming and F#. He works for the ultra cool French consultancy Infinite Square and he lives in a quaint French village near Paris with his wife and their three cats. He considering writing a book about life in France as a programmer, as given the success of “Year in Provence”, it would probably sell a lot more that his last effort, “Beginning F#”. 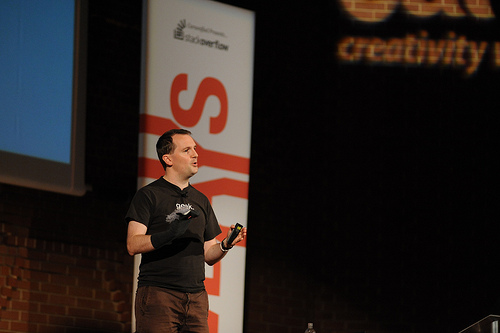 iPhone/iPad/Android Development
**Speaker: Rory Blyth
**Rory Blyth, formerly of Microsoft, is one of the most “prolific” answerers on Stack Overflow with the highest vote to answer ratio on the site.  Rory is still very focused on iPhone development, in particular MonoTouch by Xamarin. You can find Rory’s new site at Rory.me (once he actually starts blogging there).

DVCS, if you’re not doing it – you should be
**Speaker: Marco Ceppi
**Marco Ceppi is a professional Web Developer and Linux Systems Administrator, though in his spare time he is an open-source developer/advocate and moderator on Ask Ubuntu. He owns Ondina, a web hosting startup designed to revolutionize the hosting industry. For the past four years Marco has been using Git and DVCS tools in and out of the work place, providing talks to employers and the community at large about the effectiveness, efficiencies, and simplicities of DVSC tools like Git. You can find out more about Marco at his website and on Twitter.

If you haven’t already registered, head over to our page on Eventbrite to register.  Don’t forget to use discount code “blog” to save $100!