2011 was another year of fantastic growth at Stack Exchange. We continued our tradition of doubling every year, going from 16 million to over 32 million monthly visitors. We added 42 new sites, bringing us to a grand total of 78. We hired 22 new employees, and raised another $12 million in venture capital, some of which was invested in a remote-controlled, floating shark and clownfish for the office.

We’re now ranked #160 on Quantcast, which makes me wonder if maybe our big goal of becoming a “top 50 site on the Internet” was perhaps not ambitious enough. And the question and answer quality throughout our network is still rock solid, with 93% of questions getting at least one upvoted or accepted answer.

Anyway, we did one of those fun infographics you kids like so much, to highlight some of the accomplishments of the last year in vivid color, so check it out for more details. 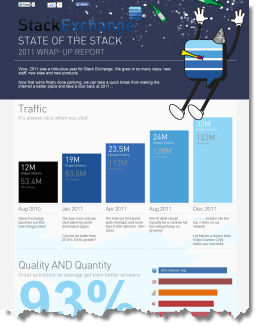 Matt and Cassidy talk about the open-source startups winning investors and attention, why even small contributions to open-source projects are important, and how founders can encourage those contributions.