So. We’ve torn through the advent calendar, tossed aside all the wrapping paper, and (hopefully) obsessively screencapped our gravatars wearing various kinds of silly hats. As of last Friday, Winter Bash 2012 is officially over!

This event was awesome. We had a total of 46,710 users participating across 76 sites, and we gave away 108,924 hats total. The most common hat was the And I Feel Fine hat, which 23,171 users earned for activity on December 21st. The least common hat earned was I Do Say, which was obtained by Bohemian, on Stack Overflow, and kalina, on Arqade for posting an epic 30 up-voted questions. Lots and lots of us were able to find all 7 unlockable secret hats, and a few even found an eighth. Well done!

Sadly, all good things must come to an end. We’ve packed up the hats (and archived the JavaScript) until next time. For now, you’ll be able to see the hats you won (and Jin’s excellent artwork) on http://winterba.sh. If you’re curious to see what hats other people earned, check out the leaderboard. 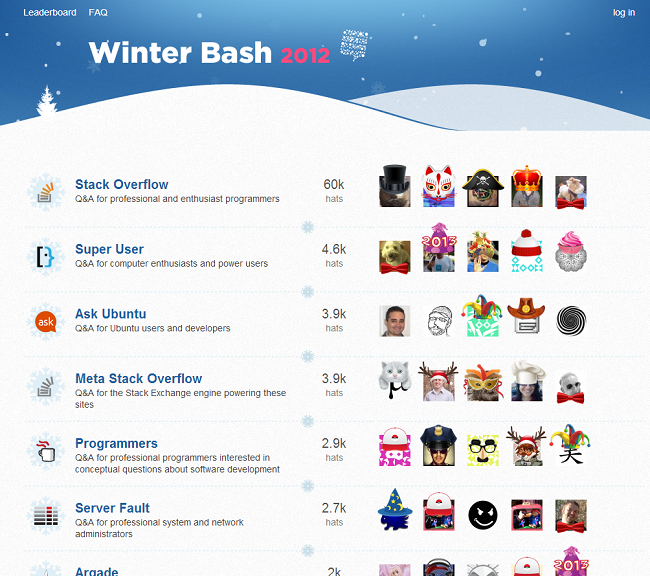 I really loved seeing how you all got creative in making your gravatars work with the hats — some of which were comically large! Below are a very small number of the hats I enjoyed seeing. There were just too many hats I liked; I have tons and tons of screencaps of users wearing hats in fun, funny, cool, and/or interesting ways. 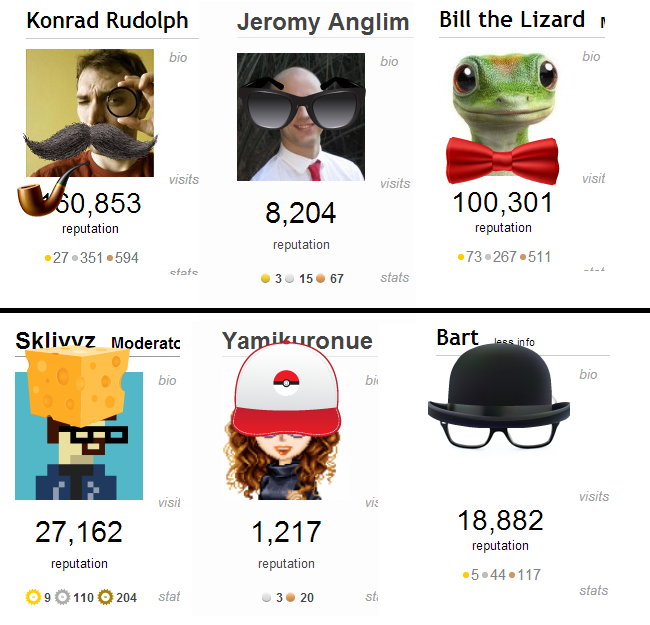 On some sites, even the Community ♦ user got into the spirit of things:

The best surprise (aside from the little blue circle letting me know I’d gotten another hat!) was seeing users I didn’t expect to enjoy hats sporting all sorts of interesting looks. Since Stack Overflow in particular tends to have a stronger “professional” focus, I tend to forget that folks who are passionate about their work get just as passionate about having fun now and again. Seeing some top users from all over the network equipping headgear, well, it caught me off guard and made me smile. 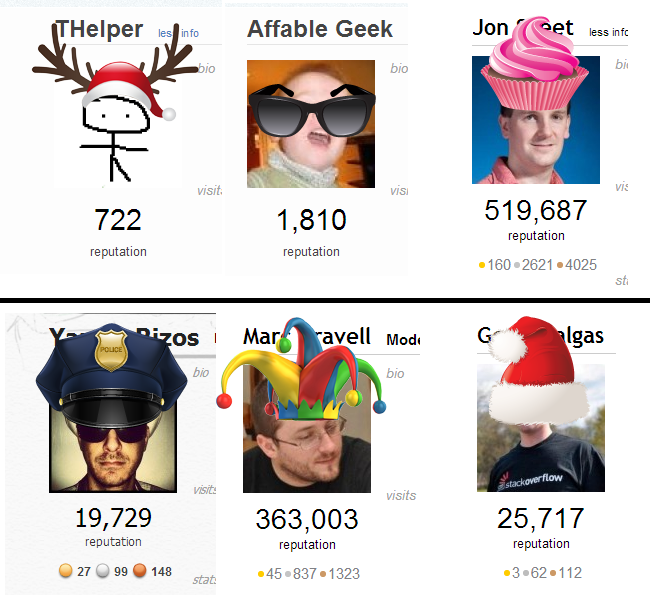 Several of you also found the “easter egg” on the Winter Bash site — holding down Ctrl and collecting all the falling snowflakes revealed a snowy pink unicorn!

One of the things I wanted to look into is how a temporary, high-profile badge can alter behaviors. While some users have mentioned that they stuck around more, was this true at large?

The data are not really clear. Sites with a very high hats-to-users ratio saw serious increases in posts created during this time, visits, and general positive responses from traffic. Straw polls of the moderation teams would seem to indicate that general site upkeep (things like flags, edit queues, and other mod-actions) held stable. Anecdotally, the review queues seemed extra empty, though whether that was because fewer folks were around the sites or because everyone really wanted Le Magritte isn’t clear. 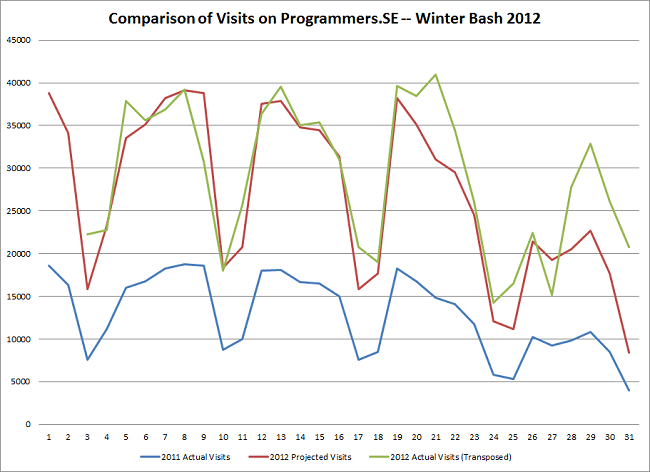 I know I consider this event a real success! It’s been a pleasure seeing everyone get excited, wear silly headgear, and just generally loosen up a bit as the year drew to a close.

Special thanks to Stack Exchange developers Emmett and balpha for building this and keeping it running smoothly, to VP of Engineering David Fullerton for coordination, guidance and encouragement, and to the aforementioned Jin for the beautiful design work.

The Future of Hats

I definitely want to try for some things for the next time:

If you have suggestions or feedback about Winter Bash, please feel free to answer this post. I’m going to keep an eye on it, and gather ideas and improvements for next year from your responses.

When we first tried out this idea on Arqade, it wasn’t entirely clear this would be well-received elsewhere. But, based on what I’ve seen these past few weeks, I don’t think we’ve seen the last of Hats on Stack Exchange.