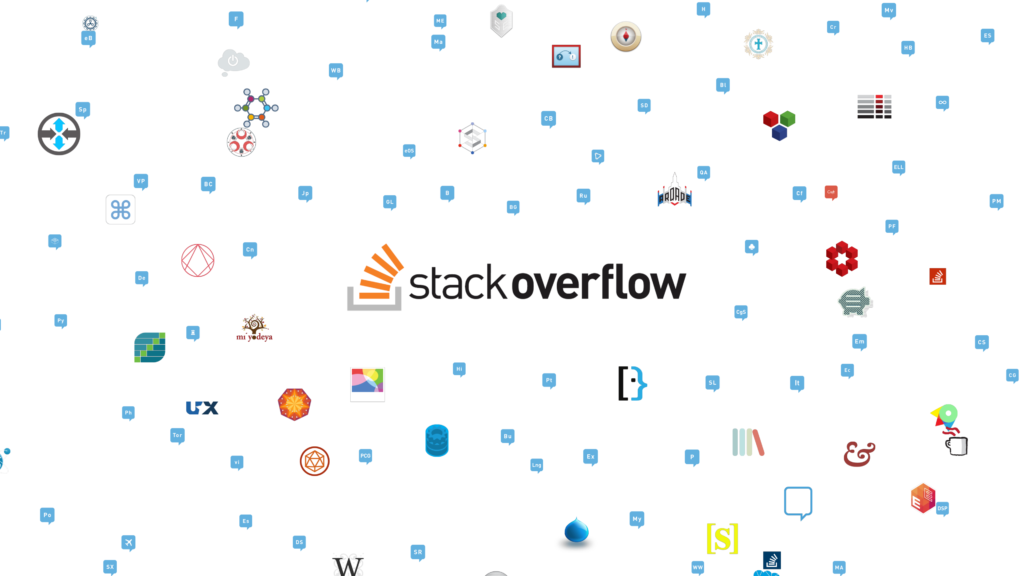 We are Stack Overflow

You may know us from such popular websites as Stack Overflow Q&A, Stack Overflow Careers, The Stack Exchange Q&A Network, and most of your Google search results.

Here’s what “Stack Overflow” is:

Seven years ago today, Joel announced the public launch of Stack Overflow. Since then, our strategy has centered around building useful tools for developers and then – if they worked – expanding them to serve a wider market. We think our new company name better reflects this core philosophy, and will continue to lead to good things for devs and non-devs alike.

And… that about covers it. But just to be safe, I’ve tried to answer the questions we expect some of you may still have.

Well, as of today, people like me will start saying we “work for Stack Overflow.” I guess we’ll need new business cards, too? Hopefully someone’s on that already. But I digress. In the weeks ahead, we’ll change the name of things like the blog, podcast, and any other places where “Stack Exchange” was referring to the company, as opposed to the network of Q&A sites. Our Q&A sites will still be collectively known as the Stack Exchange Network.

Q: Are you “just not that into” the Stack Exchange network anymore?

Our commitment to the Stack Exchange network is completely unchanged, and we’ll continue to invest in its expansion and growth. SE’s users have built a network of constructive, civil communities of helpers on a previously unheard-of scale, and we’re insanely proud to be a part of it. Here are just a couple of facts to drive home how much you’ve all achieved:

Here’s what one of our investors had to say on the topic:

I believe Stack Exchange’s growth has now reached escape velocity. Not only will the existing topics continue to grow, but many new topics will emerge, until the network covers every topic that is amenable to objective Q&A. As new generations of people grow up on the internet, old habits — searching through textbooks or how-to books, or asking friends—will fade away.”

You hear that, books?? We’re coming for you, you filthy tree-based anachronisms.

We started with better Q&A for developers.

When we named the company Stack Exchange, we were only making Q&A sites. We’d had great success with Stack Overflow Q&A and we were expanding that engine to serve new topics. So, using the Q&A network’s name for the company made sense. If we’d decided to make one of those lame, corporate hierarchy charts,and for some reason had chosen to ask an untalented child with a crayon to draw it, it would have looked a lot like this: 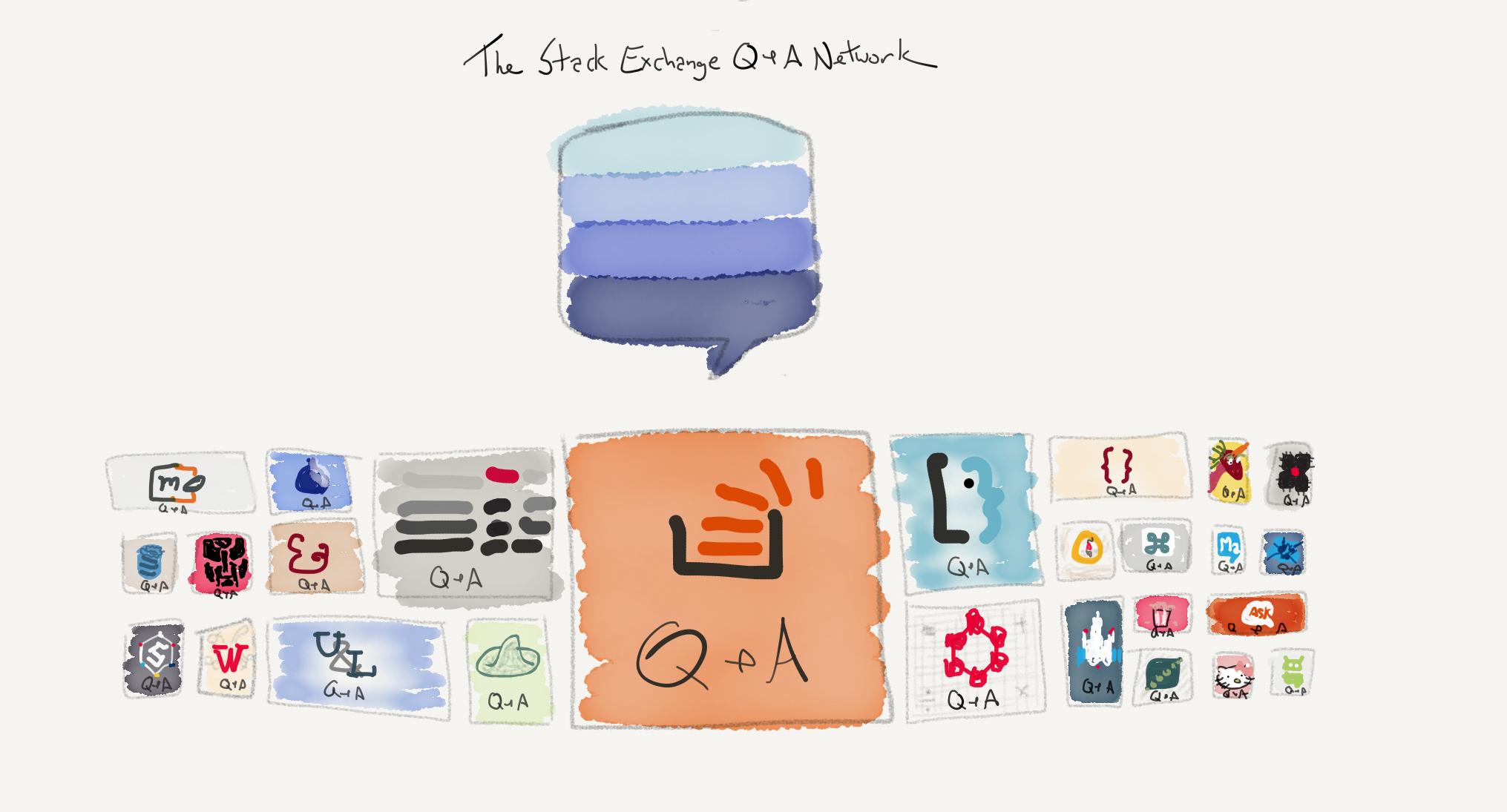 And just to be clear, Q&A remains our core product, and we’ll continue to invest in helping it serve more of the world’s developers, chemists, photographers and whatever the heck these awesome people are.

Then, we focused on better jobs for developers.

It was pretty obvious that even though developers were scarce, valuable talent, most job boards were still designed for recruiters’ needs, and were full of fake “exciting new startup!” listings and jobs requiring things like “8 years experience with Swift”. Tired of that nonsense? So were we. So we built Stack Overflow Careers. Which totally effed up my corporate chart structure. But Joel was all,

“We’re supposed to be relentlessly serving devs, not charting dopey crap. Figure it out, or I’ll take your standing desk away, and tell the pastry chef no seconds for you.”

But I still couldn’t come up with any good spot for Careers, so I just stuck it somewhere random. And since Joel had said “relentless” a bunch of times, I added a drawing of Batman, cuz he’s super-relentless and I was a lonely teenager: 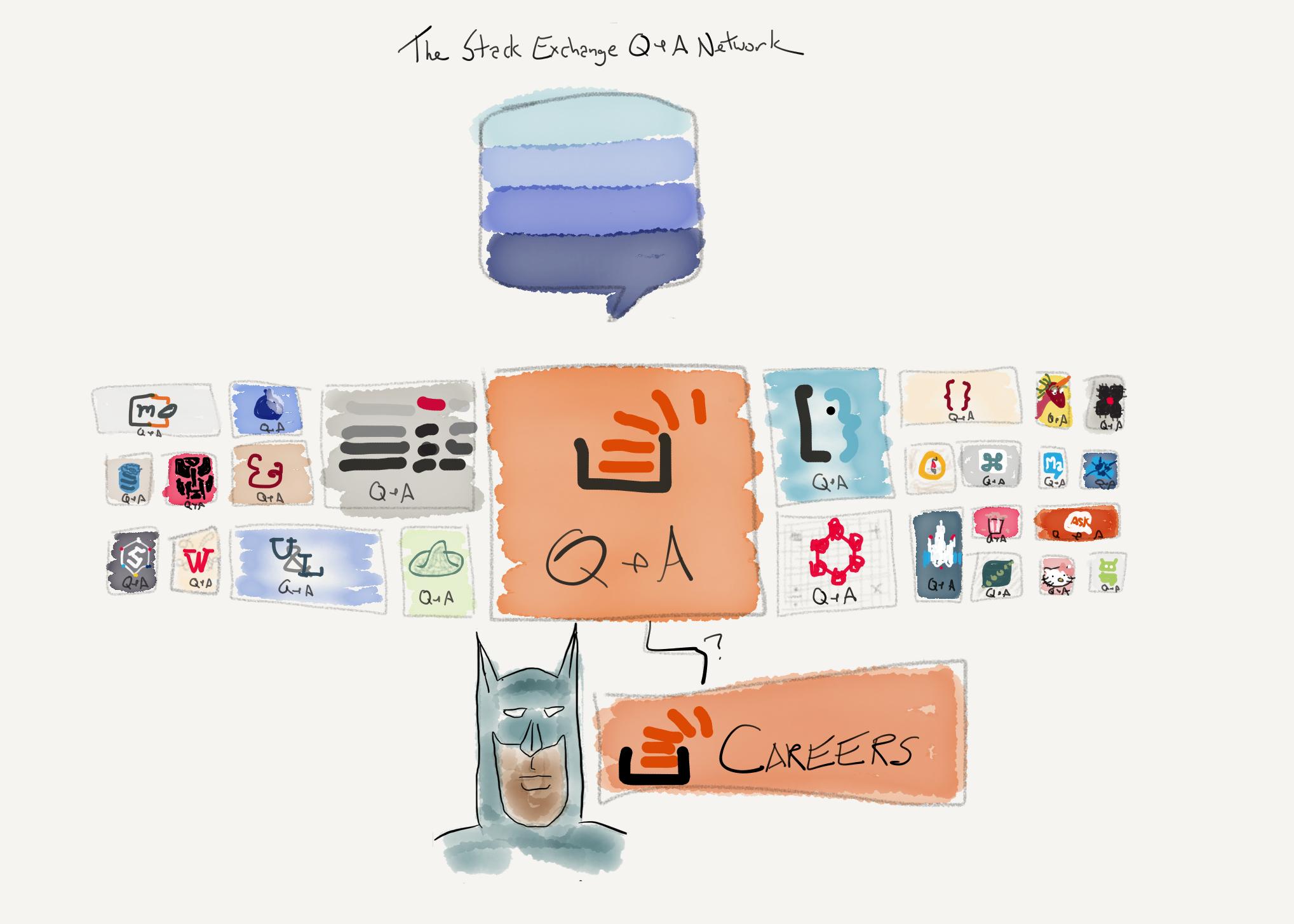 Next up? Better EVERYTHING for developers.

Which brings us to today. Now, we could just sit on our laurels and reflect on all we’ve achieved. I actually proposed that laurel-sitting plan, but you know how Joel is:

“You know when you get to sit on your laurels? When every developer problem has been solved. Last week, Carmack Instagramed that that he was eating a crappy sandwich. YOU ARE FAILING HIM.“

Honestly, some days I worry about Joel, but he’s on to something:

Developers have a lot of problems.

We got here by focusing on underserved developer needs, and asking the world’s developers to help us solve them. I think that if we’d set out to build the best Q&A platform for everyone’s needs, it wouldn’t have helped anyone. By narrowing our focus to a specific group we thought we could help, we were able to create a product opinionated enough to actually make a difference.

So, we’re going to stick with the plan. As we look for new ways to serve our users, we’ll focus on what we know best: solving developer problems. Today, we’re working on our biggest expansion since Stack Overflow launched: Documentation. You can learn more about it here, or sign up for the beta, and be part of building what we think will be our next Big Thing.

I should point out that we fail a lot around here. But wherever we’ve succeeded, it’s come from focusing on how we could better serve devs’ needs. And when that success looked transferable, we passed it along to the rest of the world. So, we’re gonna run with that, and hope you all keep on running with us.

Here’s what that crayon wielding kid thinks we look like today: 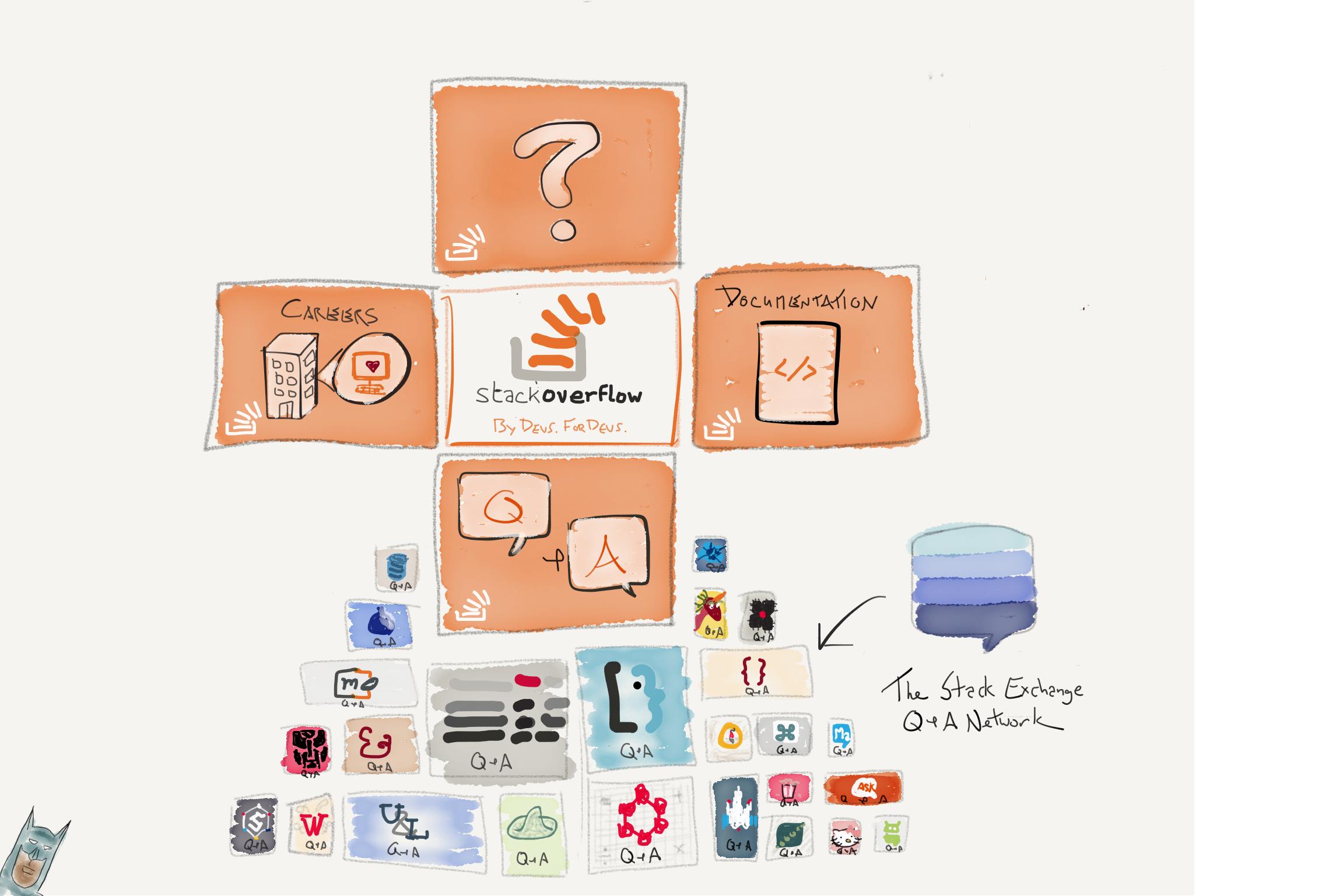 Do I hope to see more multi-colored, (poorly-drawn) networks spring up around some of our other dev products? Hell yeah. Will they? Beats me. But as always, we’re counting on you to help us figure it all out.

Didn’t you say something about the logo?

Oh – right. With the exception of a few minor tweaks, the Stack Overflow logo that you know and love has been essentially unchanged since we paid $512 for it in in a 99 Designs contest back when that was a lot of money for us. We thought it was pretty awesome then, and it’s still pretty awesome now. So, the design team didn’t change much, and just made a simple, clean update to the existing logo. Next week, they’ll share how it fits into a new style guide we’ll be using to help us standardize our visuals and save valuable design cycles downstream.

But for now, we were inspired by Google’s video explaining how they arrived at their new logo concept of “kindergarten letters, most of which are actually aligned correctly.” So we made a short video. While ours doesn’t include the phrase, “…and just the right soupçon of whimsy” nearly as much as theirs did, I think it does a nice job conveying exactly how ours got changed.

(Film by our own Benjamin Dumke-von der Ehe, aka balpha, music by Zero Project)

We are Stack Overflow. And we’d be nothing without all of you.