And here we are again, at the end of another Winter Bash, the annual Stack Exchange celebration where the hats are made up and the points don’t matter.

Who Wore It Best?

Most of the fun of Winter Bash is, of course, seeing the actual hats on avatars. So let’s kick off with some pictures! 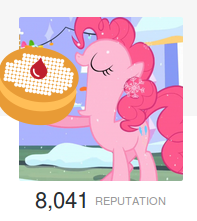 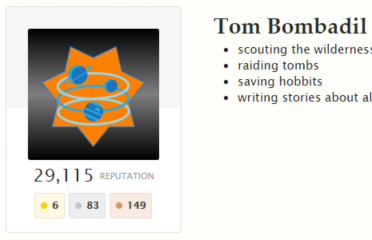 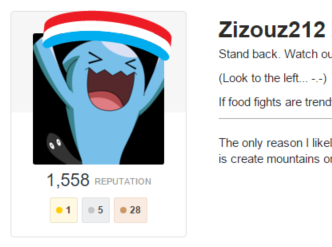 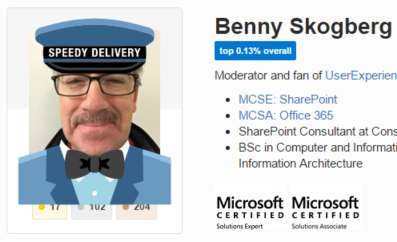 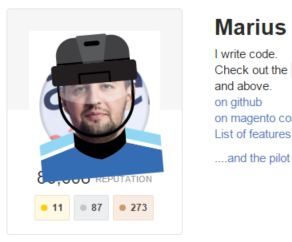 And a very honorable mention to Role-Playing Games SE’s BESW for taking the Timey Wimey hat and really running with it!

The most commonly awarded hat this year was, of course, Every! Body! Gets! A Hat!, the hat that was automatically given to all Winter Bash participants on a site once any 20 hats were unlocked on that site. A total of 99,388 of them were distributed across the network, to 70,103 unique users. Sadly, that means the hat didn’t quite live up to its name, and a couple thousand people did not get to look like Oprah… or sport fabulous mustaches, like this fancy gentleman: 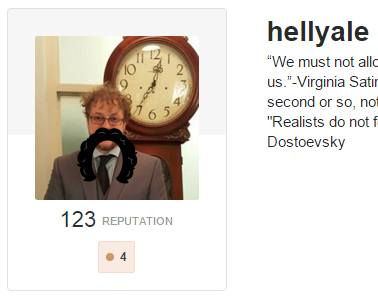 Congratulations to Mathematics SE for being the first site to unlock this hat, less than 18 hours into the event! Also to Code Review SE and Blender SE for technically needing only three users each to get this hat (i.e. at the time that the hat was earned, one user had 16 or more hats, and two other users had enough hats that the first user didn’t, filling the number up to 20). The biggest “team efforts” occurred at Aviation SE and English Language Learners SE, on each of which ten users came together to get the site past the 20-hat mark. All in all, 90 communities managed to “get Oprahed.”

Not surprisingly, the next-most-common hats were “participation hats,” given for doing little more than showing up on a given date: A New Hope was earned the most total times, at 35,329, but Sufganiyot was earned by the most distinct people, 27,050. The most common hat for an actual achievement was Cerro de Potosi, with 21,720 awarded users for earning silver badges; fortunately, our badges don’t require any destructive real-world silver mining. Actually, more people earned silver badges during the event than visited on Christmas; Cerro de Potosi edged out O Tannenbaum, which was earned 20,104 times.

Many Explorers (4285, to be exact) used Winter Bash as an opportunity to venture to new sites, where they were welcomed with upvotes by the natives. Some 1994 of those natives may have been designated Greeters as a result.

On the other end of the spectrum, the rarest non-secret hat was Living in the Future, which only 42 people earned, and nobody got more than once. It was doubly challenging, requiring users to have learned enough to solve their own problems and preventing them from custom-designing questions for the purpose of the hat by requiring the question to predate Winter Bash.

People were much more likely to close questions than to reopen them, with 10,015 Melpomenes going out compared to just 1556 Thalias. However, given that the only questions that can be reopened are those that have been closed in the first place, and that many closed questions never get improved to a point where reopening is appropriate, that’s not a bad showing.

While many users enjoyed playing along casually, there was a strong corps of “power users” as well, as evidenced by the numerous awards of Specialist Hatsman (earned 1911 times, for earning 11 other hats; a play on “specialist batsman” from the game of cricket) and Fan-hat-ic (earned 20,469 times, for visiting on ten consecutive days; a play on our badge “Fanatic”).

Do You Want To Know A Secret? Do You Promise Not To Tell?

Well, actually, at this point, you can tell. There were a total of 13 secret hats this year (or 14 if you count the white and blue Flip Flop variants separately… which is highly recommended, because it results in an even 42 hats for the year).

The first one awarded, and first one the community figured out the trigger for, was Odinson. It ended up being awarded 1817 times, and was triggered by closing a question as a duplicate using the “dupe-hammer” privilege or voting to close a question as such that was later closed by hammer. 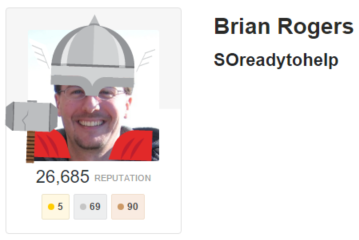 The first user to correctly explain Odinson was Undo. In doing so, he earned himself a second secret hat: Archimedes, the hat given out for correctly identifying another secret hat’s trigger. Veteran Winter Bashers may remember it being called Eureka in past years. This year’s only manually awarded hat, it was earned by 18 people.

Next to fall was Hairboat’s Revenge, which was given to any user who replied to everyone’s favorite Community Manager, Jon Ericson, by answering one of his questions, commenting on one of his posts or replying to one of his comments. A total of 516 users did this, and it was apparently so fun that many did it on multiple sites; the hat was given out 614 times.

Soon afterwards came 007, for posting an answer that received 0 comments to a question that had 0 comments and reaching a score of at least 7 for the answer. A simple reward for posting a good, clear answer to an equally clear question, it was awarded 402 times. 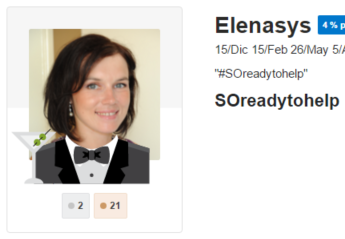 The final secret hat to be deciphered on day one of the event was Sun Wukong, for posting a meta question or meta answer that attracted at least five upvotes and at least five downvotes. It was a lightweight test for a moderately popular old badge request, and it was given out 165 times.

Day two kicked off with a team of users solving Amazing Grace, another nod to one of our favorite people. By asking a bug-tagged question on a meta site, scoring at least 10 and attracting an answer that also scored at least 10, users could make themselves look like Admiral Hopper. This was one of the rarest hats, as only 30 people earned it (32 total times).

Returning to the realm of fantastical headgear, users could get It’s Over 9000! for racking up a total of 9000 views across all of the questions they asked during Winter Bash. This turned out to be another hard one; only 48 people did it, and nobody managed it on more than one site. 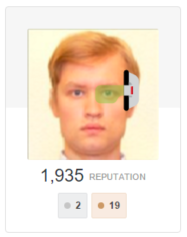 After that, things quieted down until Friday, when It’s Always 5 O’Clock Somewhere first appeared. It was awarded for asking a question at exactly 5:01 pm on Friday, though it didn’t have to be 5:01 in your local time zone, just at some standard time zone currently in use in the world. It was earned 170 times, by 167 users. 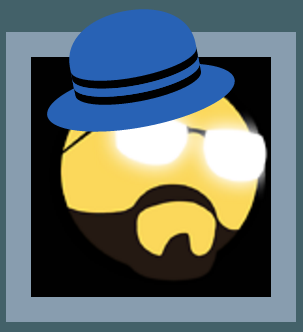 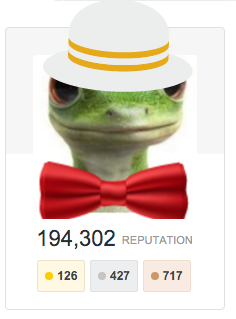 It took until nearly the end of the event for three more secrets to be cracked. Flying Tiger was a successor to last year‘s Red Baron. The original trigger was to find a question with a score of -3 or lower, post an answer that reached a score of 5 or better, and bring the score of the question up to 3 or better. This year, the trigger was the same, except that your own votes didn’t count. Because of the natural difficulty of the hat and the late date at which the community realized the trigger, only 11 were earned (all by different users), making this the rarest hat in the history of Winter Bash!

Next up was Cleanup Crew, which probably produced a greater variety of trigger theories than any other hat this year. It was earned by deleting ten of your own comments that were left under someone else’s post, before the author edited the post. In the end, the crew was 195 users strong, though a few of them pulled duty on multiple sites, bringing the total hat count to 198. 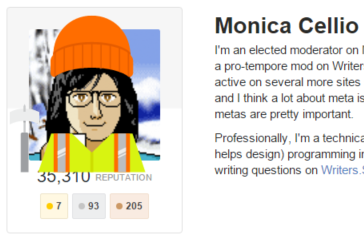 The last hat to be successfully solved, Edward Edwards, was awarded to users who won a bounty even though a competing answer had already met the criteria for the bounty to be automatically awarded. This was another uncommon hat, with 47 going out to 47 people. 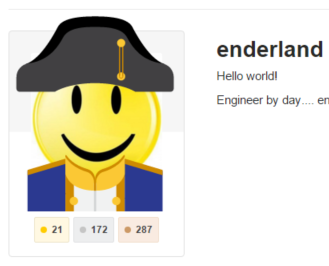 And now, what you’ve all been waiting for: the mystery of the Onion Knight, revealed! This hat sparked debate almost immediately, with most people split between whether it referred to the Final Fantasy job class or the Game of Thrones character (and a couple people piping up for a Dark Souls NPC). Who was right?

None of them! A hint midway through the event directed guessers to focus on the word “onion,” but it probably should have done a callback to 2009 and prodded them to do so “as a programmer.” The hat was meant to make people think of Tor (now a proper name of its own, but originally an acronym standing for The Onion Router), and evoke the concept of anonymity. Users who received the Onion Knight hat posted questions that received at least three anonymous feedback pseudo-upvotes from visitors who did not have full voting privileges on the site. There ended up being 369 Onion Knight hats, awarded to 361 distinct users. 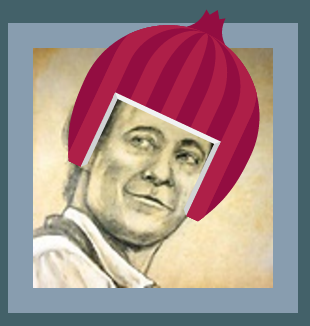 Finally, even though it’s not a competition and the points don’t matter, this post couldn’t be complete without declaring some winners. This year, nobody earned all of the possible hats, but three people tied for “most hats” at 39 each:

Thanks to everyone who got involved for another fun year! 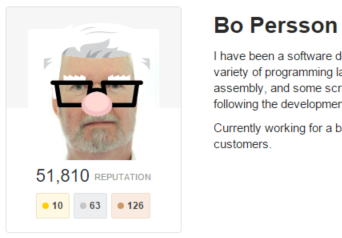 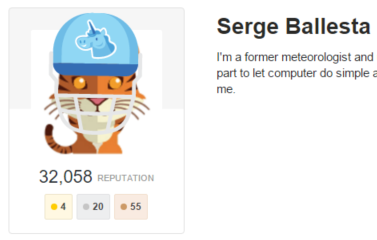 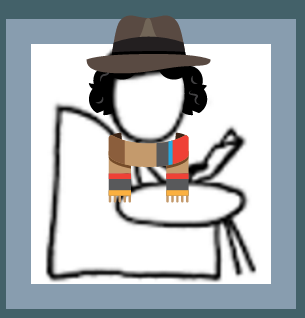 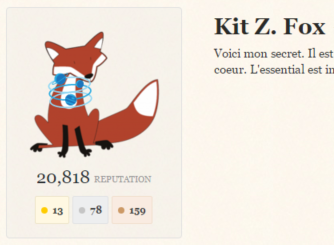 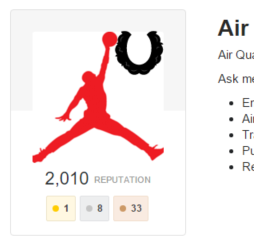 For those who are especially interested, I’ve posted additional statistics and analysis on Meta Stack Exchange (along with more screenshots). 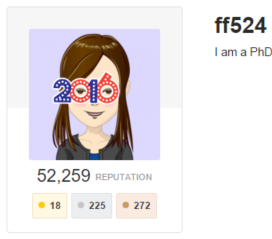