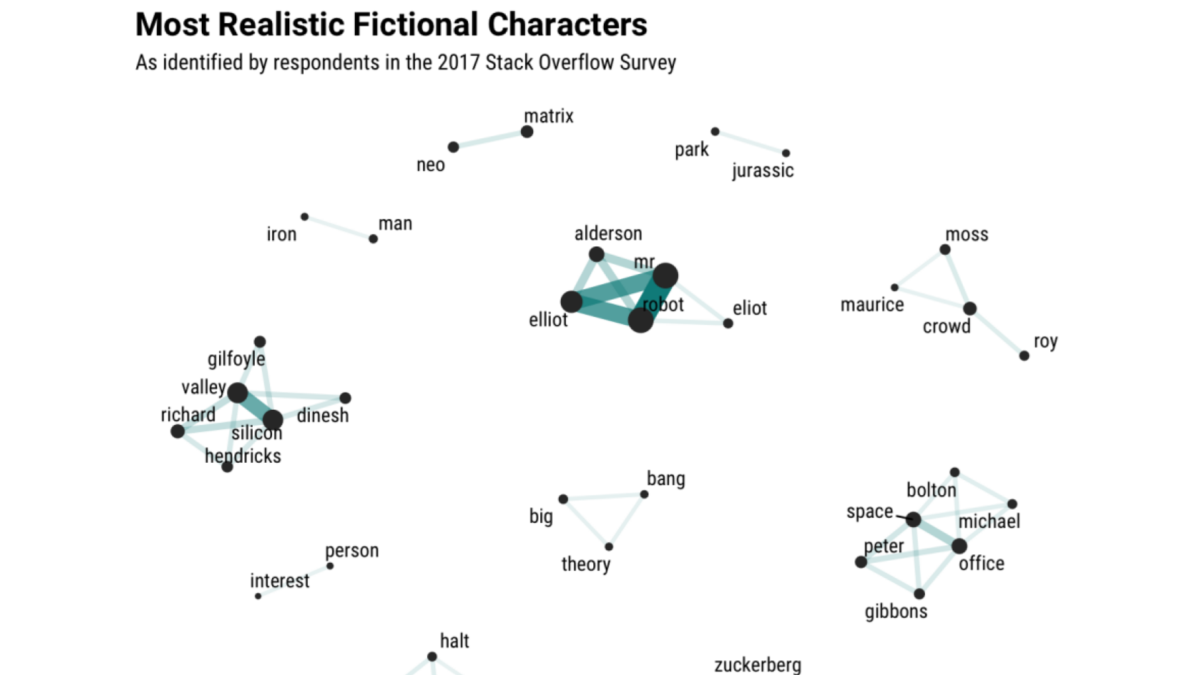 Computer programmers, IT specialists, and hackers are often depicted in popular works of fiction, from books, movies, to TV shows. On the 2017 Developer Survey, we asked respondents about depictions of what it’s really like to be a programmer. This was one of my favorite questions on the survey this year, and analyzing these results has been quite the glimpse into the opinions of our community.

This question was open-ended, with a free text field that respondents could type anything into. Let’s use some text mining to explore the individual words our survey respondents used to answer this question. 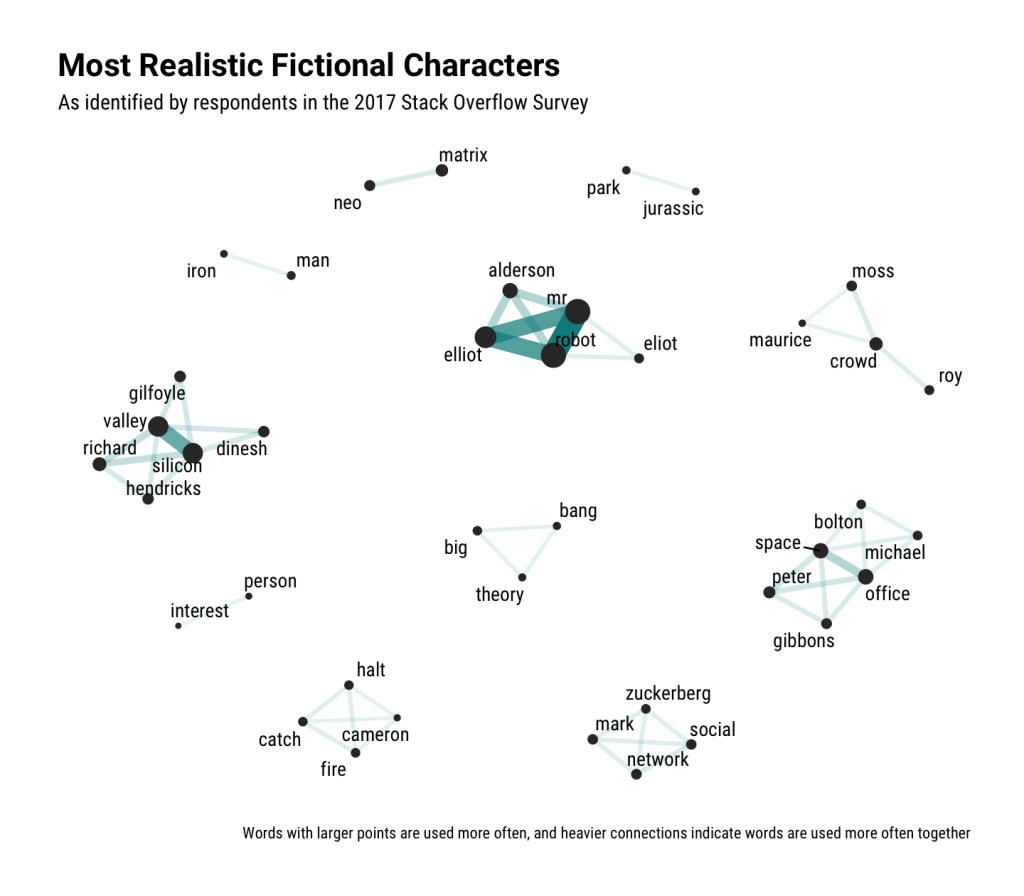 Many of our users responded with Elliot Alderson from Mr. Robot as a realistic depiction of a programmer, with other strong showings from the characters of Office Space (such as rap aficionado Michael Bolton) and Silicon Valley. I’ll admit I was a little surprised to see The Matrix with so many answers on this question, as I can’t say that I personally have ever fought off evil agents in bullet time.

After we explored the words our survey respondents used to describe fictional programmers and hackers, we categorized individual words into larger groups for specific characters, using word correlations and word networks like those shown above. After this categorization, we can see what proportion of our respondents gave various answers for this question. 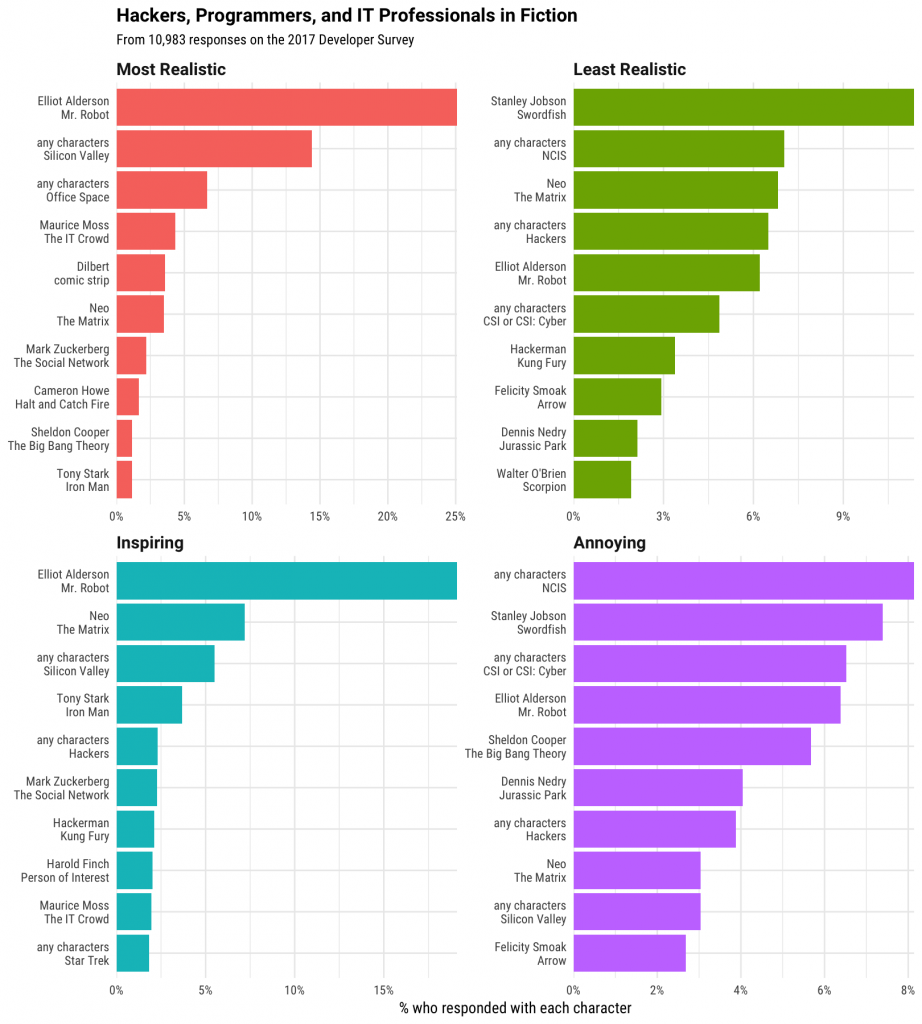 Notice that our survey respondents identified many of the same fictional characters for all of these categories, just with different proportions. The protagonist in Mr. Robot is a common choice in all categories but is the most common choice, by a wide margin, for most realistic and inspiring. The characters from Silicon Valley are often identified as realistic and sometimes chosen as annoying but were not a significant choice as unrealistic. Stanley Jobson from Swordfish is identified as both annoying and unrealistic. Sheldon Cooper from The Big Bang Theory is a common choice for annoying and is sometimes chosen for realistic, but is not a significant choice for unrealistic.

Given how many respondents on our survey chose the most common answers across all versions, let’s look at differences between the four versions. Which characters were respondents more likely to choose for one version of the question compared to others? Let’s start by comparing only most and least realistic. 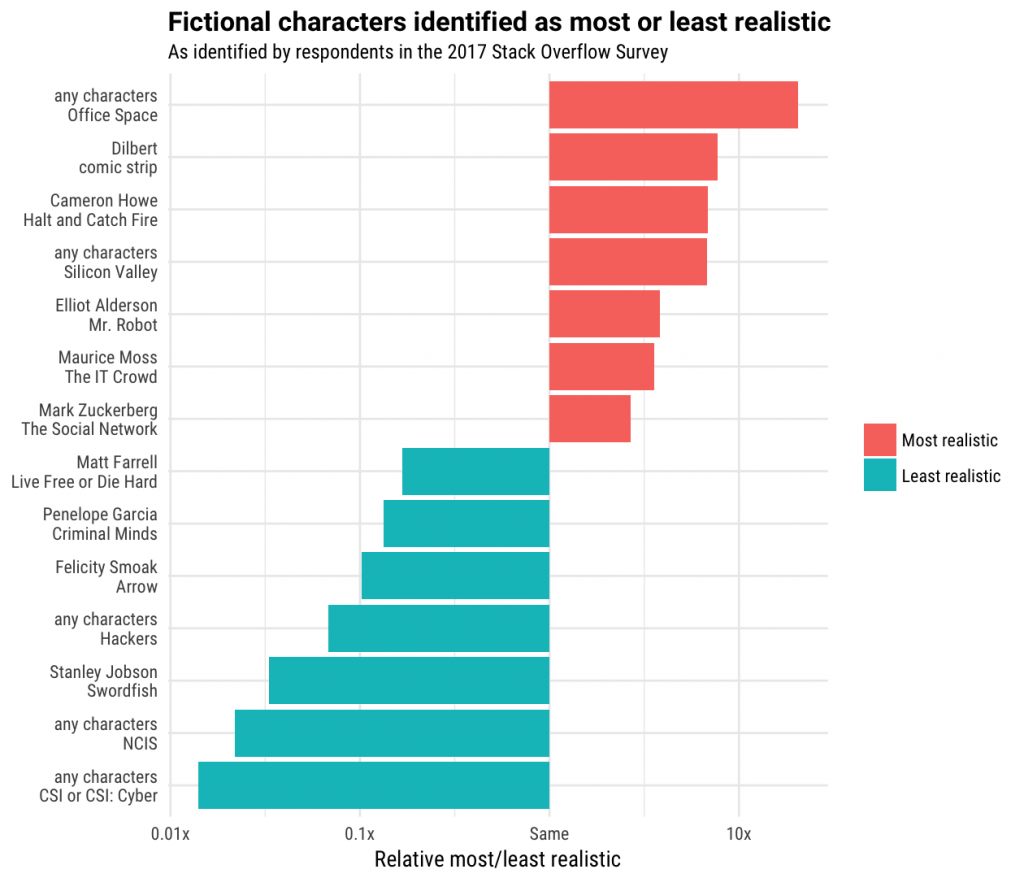 Television characters from shows like CSI, NCIS, Arrow, and Criminal Minds make up many in the least realistic group. The characters from Hackers were also voted unrealistic, which is heartening, because how many us have rollerbladed with a gang of our coworkers? Survey respondents were likely to identify the developers in Office Space, Dilbert, and Cameron Howe from Halt and Catch Fire as most realistic. And Maurice Moss! Who among us hasn’t experienced something like this in our work?

We can similarly compare each of the four versions to the overall choices made by respondents on this question and find which fictional characters were more likely to be chosen for each version. 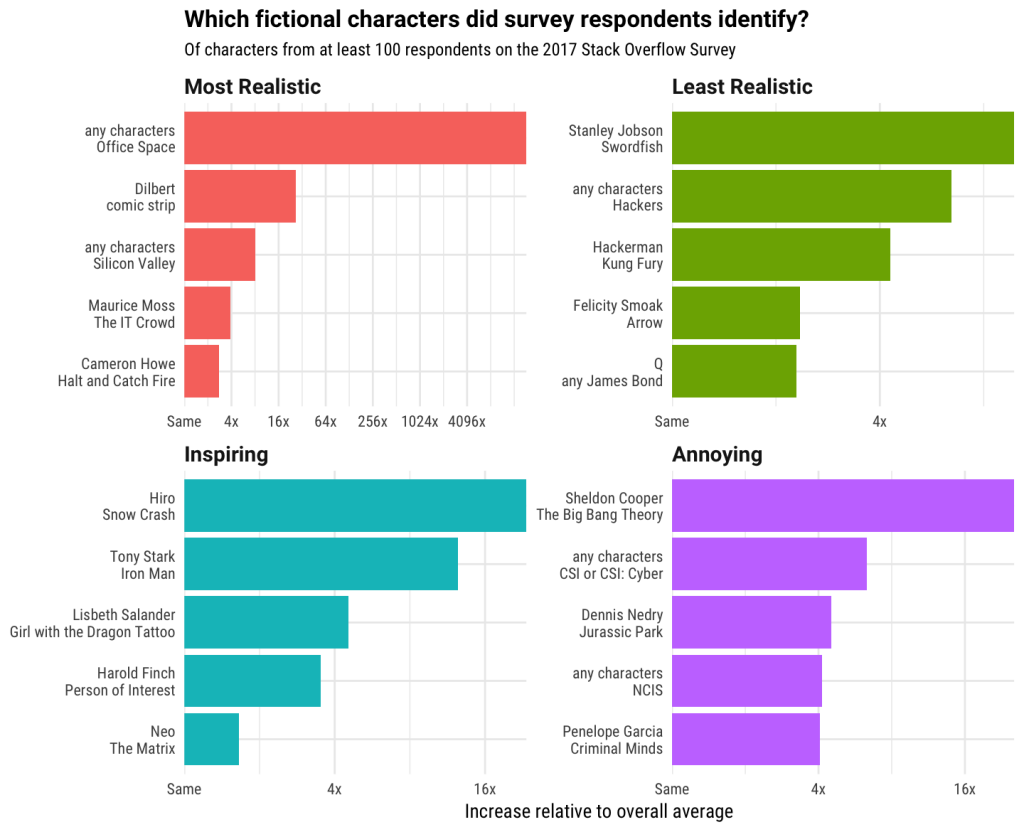 I have now added watching the short film Kung Fury to my plans for the weekend; its character Hackerman was identified as one of the least realistic relative to the choices made in the other group. I love seeing Neal Stephenson’s wonderful novel Snow Crash show up in the analysis here, as one of the most inspiring portrayals of hackers in fiction.

I’m interested in women in tech, so let’s take a quick glance at words chosen at higher rates by men and women (including those who identified as transgender men and women) in the survey, for all the question options as a whole.

Women and men both gave the common answers at high rates, but this plot shows characters that women or men identified more often relative to the other group. Women were much more likely to identify fictional characters who are women, like Penelope Garcia in Criminal Minds and Lisbeth Salander in The Girl with the Dragon Tattoo. (Remember that this is not necessarily in a positive context!) Men were much more likely to identify fictional characters who are men, such as Mark Zuckerberg (fictional?), a James Bond villain, and Tony Stark. We all love Iron Man, of course, but this is a nice reminder that representation matters; it is helpful to see lots of different kinds of people working as developers, both in fiction and real life.

We can say that the television show Mr. Robot is having a moment, for the developer community at least. The main character was one of the top choices in all versions of this question, and thus is perhaps the most/least realistic/annoying/inspiring portrayal of what it’s like to be a computer programmer today.

More seriously, when we look beyond the fact that respondents gave common answers to all the versions of this question at high rates, we see interesting differences between the four versions. Tony Stark was chosen at a high rate for inspiring, and Sheldon from The Big Bang Theory was often considered annoying. Characters from Office Space and Silicon Valley were often chosen for most realistic, and portrayals of computer programmers from works like Hackers, CSI, Swordfish, and NCIS were voted unrealistic.

Working on the analysis for the 2017 Stack Overflow Survey has been interesting and rewarding, and the results give us insight into how developers learn, work, and share. Check out the full report on our results to learn more about the developer community, from technologies to geography to salaries.