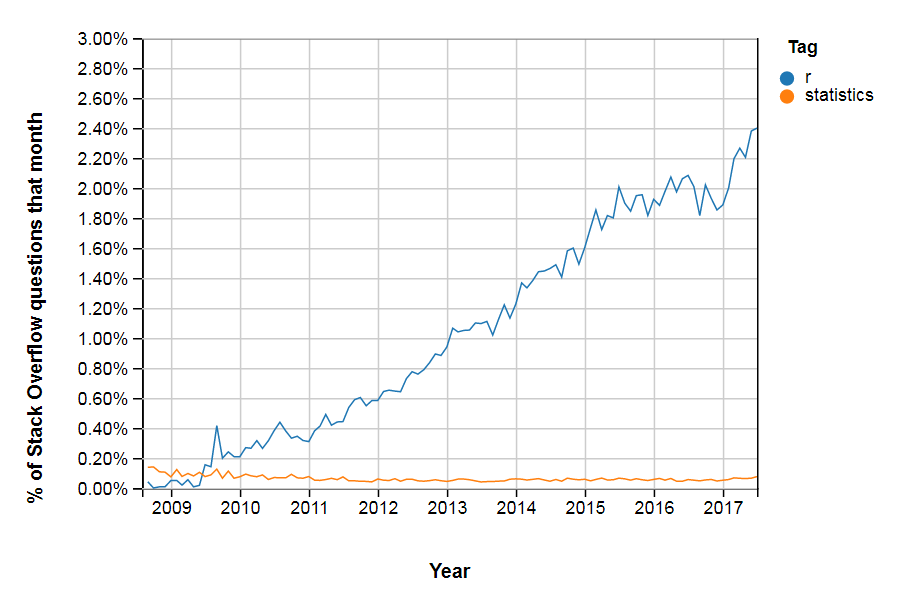 This week we’re at OSCON in Austin as part of our efforts to support the open source community. While we’re here, we thought we’d compare what’s trending on social media versus what we can see through our new Stack Overflow Trends tool. We launched Trends this week so developers could see how technologies have grown or shrunk over time.

The top terms on social yesterday included a combination of companies and tech, with Kubernetes and TensorFlow leading the pack for the latter group. Here’s a short list of some of the top terms: 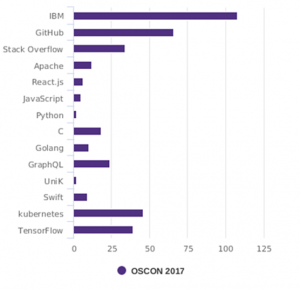 Early in the day, we presented how Docker and Kubernetes were tracking since we’ve seen buzz about both at OSCON.

.@Intel's @quarfot about to talk density at scale #OSCON. Check out the rise of #docker & #kubernetes since 2014 https://t.co/3f7mhmfGeK pic.twitter.com/UVBDSmJlIQ

But more impressive is the explosion in popularity of TypeScript, a superset of JavaScript that we use internally at Stack Overflow.

Another interesting trend we noticed yesterday was the expansion of several data science technologies, especially the fast-growing open-source TensorFlow library, which recently caught up with the MATLAB language in questions asked per month.

Yesterday at Microsoft’s Build conference (it’s a busy week for tech events), the company announced an Azure database for MySQL and PostgresSQL. Unsurprisingly, MySQL is still popular, although its growth may have stalled or even started shrinking.

With all the work we’ve done to launch Stack Overflow Trends, we were pretty pleased that O’Reilly Media (producers of OSCON) founder and CEO Tim O’Reilly gave us a shout out. (Thanks, Tim.)

He later asked us how competing cloud technologies have been growing on the platform. Short story:

It's a 2-horse race between AWS and Azure for developer mindshare, and Google Cloud is just getting started. #OSCON https://t.co/hidJTefvfO pic.twitter.com/Cey3EfIebC

Tim also pointed out that we should include some context for the analysis and how the Stack Overflow community might differ from the overall programmer population.

It would be great to see some qualification of your users. E.g, if they bias away from Microsoft Developers, that would be useful context.

That’s an important question that we often think about and will share more about in the future. Though in regards to this specific example, since Stack Overflow runs on .NET and its founders were well known for their Microsoft-related blogging, the community was originally shifted towards Microsoft developers. But that appears to have change over time, with Microsoft technologies shrinking as a share of questions.

Mystery of the day: Microsoft tech is shrinking as a % of questions. Is this because @jonskeet answered them all? https://t.co/qUBaYQC3xQ pic.twitter.com/YZE8zpsdNT

[Update to the above]

…And by Window in that graph we of course meant Windows. Fixed below. pic.twitter.com/blJGX5kVEc

We’ll be back with more analysis on Twitter today and tomorrow.

Don’t see your favorite language, technology, or framework in this post? Use the Stack Overflow Trends tool to create your own graphs, and see what you can learn about how the developer ecosystem is changing and where it might be going in the future.

Are you looking for work using the languages, technologies, or frameworks discussed? Check out our listings for Javascript jobs,  MySQL jobs, R jobs and more on Stack Overflow Jobs.