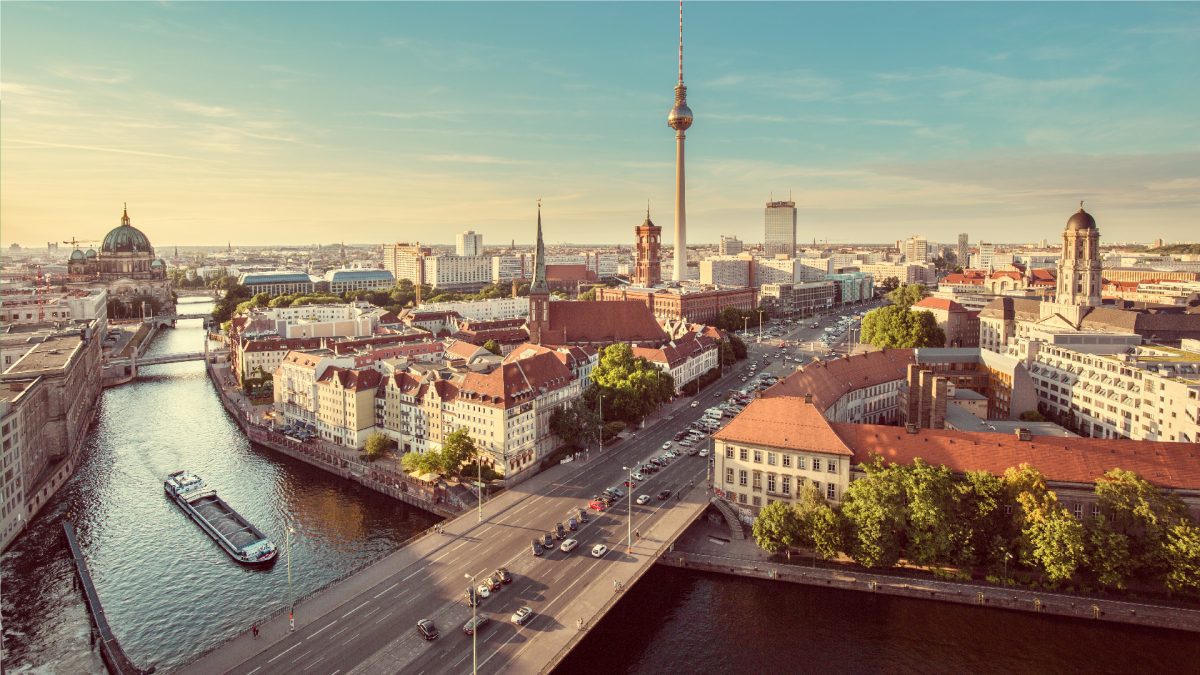 Software development is a global industry, and programmers everywhere rely on Stack Overflow to find solutions to their problems. But as we’ve analyzed before, different countries use different languages and technologies.

In this post we’ll take a look at German software developers, as seen by their Stack Overflow visits. We’ll see how the programming languages and technologies they use differ from the rest of the world, and how they differ within major cities in the country. All of these analyses are of 2017 year-to-date, from January to mid-September.

The languages and technologies a country’s developers use tend to reflect the needs of its software development industry. What do German developers work with more often, or less often, than the rest of the world?

What tags were most visited from Germany? 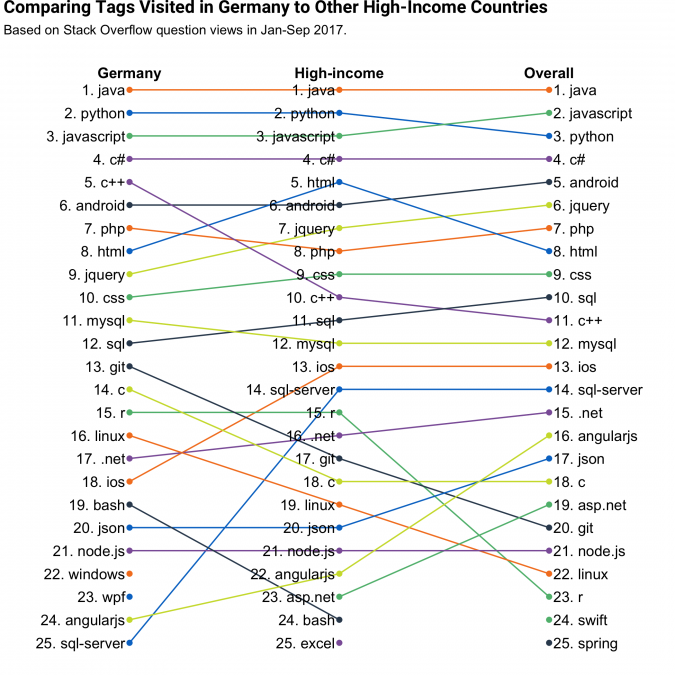 The above graph shows only the 25 highest-traffic tags in each region. Among the 100 most-visited tags, which were most over- or under-represented in German traffic to Stack Overflow, compared to high-income countries in general? 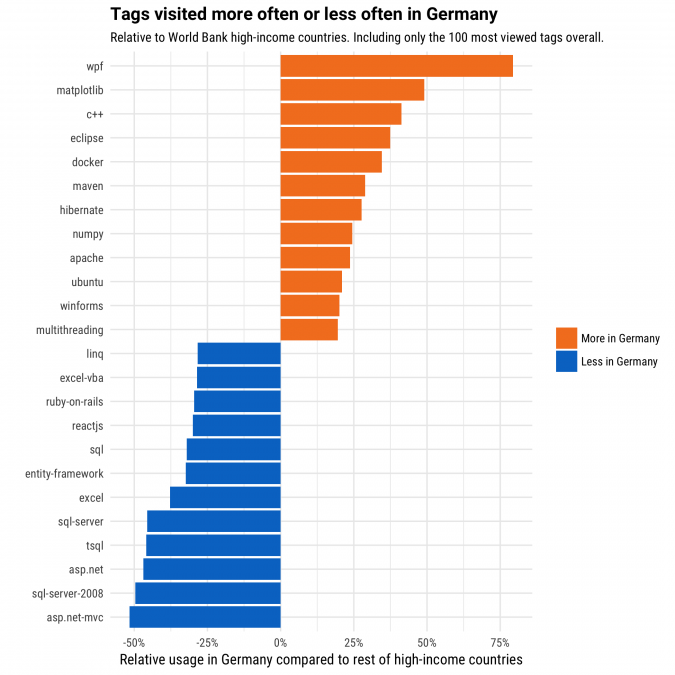 We see again that C++ is disproportionately visited from Germany, but that WPF, a framework for building desktop applications in Windows, is the most overrepresented tag overall. Both matplotlib and NumPy make the list as well, suggesting Germany may have a disproportionate number of Python data analysts.

Many of the most under-represented tags are Microsoft technologies such as ASP.NET, SQL Server, and Linq, along with some web technologies like React and Ruby on Rails. It’s interesting that WPF and WinForms go against this trend as the only Microsoft technologies more visited from Germany than elsewhere. This may suggest that while the Microsoft stack is used less for web development than in other countries, German developers are disproportionately likely to develop Windows desktop applications.

What cities in Germany did the most traffic come from? 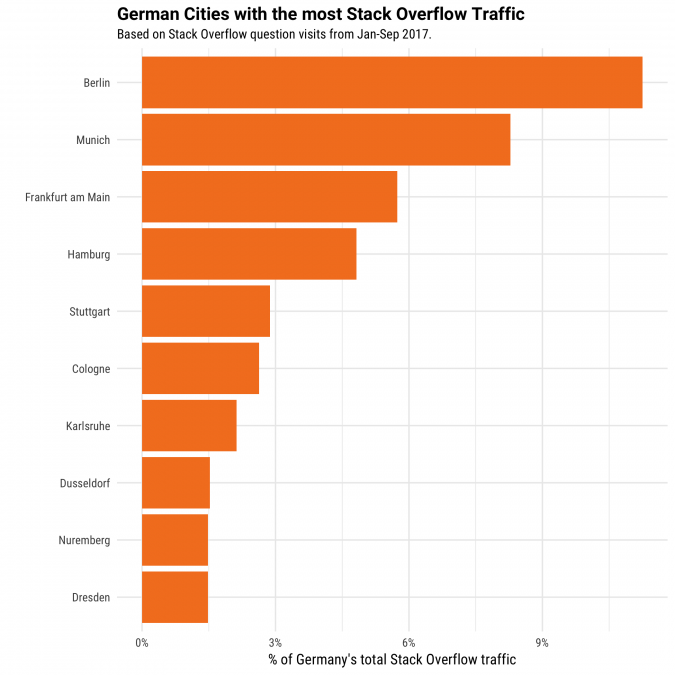 This is similar to the list of largest German cities by population, except we notice that Munich has nearly twice the traffic of Hamburg despite having a lower population. Karlsruhe also drives more Stack Overflow traffic than we’d expect from its population, which analysis shows is mostly thanks to the Karlsruhe Institute of Technology.

We’ve previously compared the languages and technologies used between cities like London and San Francisco. How do the two highest-traffic cities in Germany, Berlin and Munich, compare? 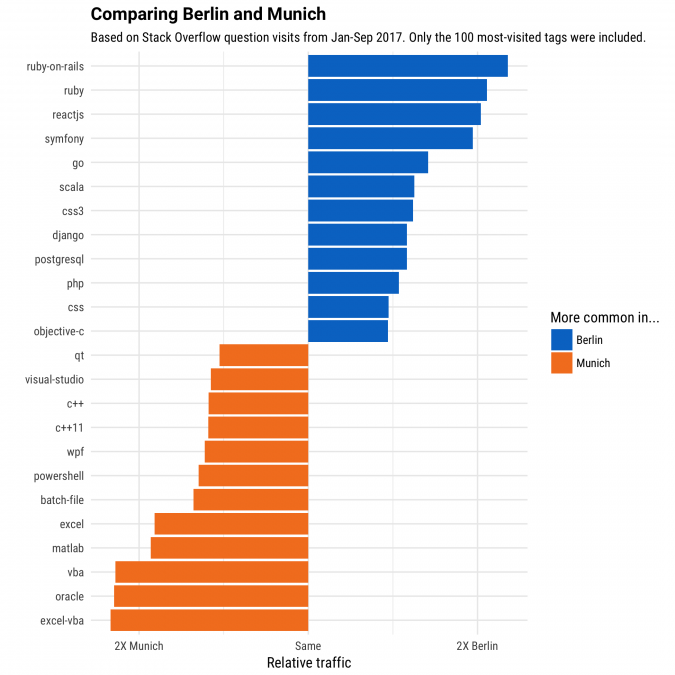 This shows a clear difference between the two. Relatively more web development takes place in Berlin than in Munich, with far more visits to tags such as ReactJS, Django, PHP, CSS. We saw that Ruby on Rails is under-visited in Germany overall, but we can see that the Rails development that does happen is disproportionately centered in Berlin.

Munich developers are more likely to visit Microsoft tags such as VBA, Excel, Visual Studio and WPF. This may be because Microsoft’s German office is in Munich, or because Munich has a disproportionate number of developers working in finance.

What if we compared the six highest-traffic cities, examining which technologies are visited most in each relative to the overall average? 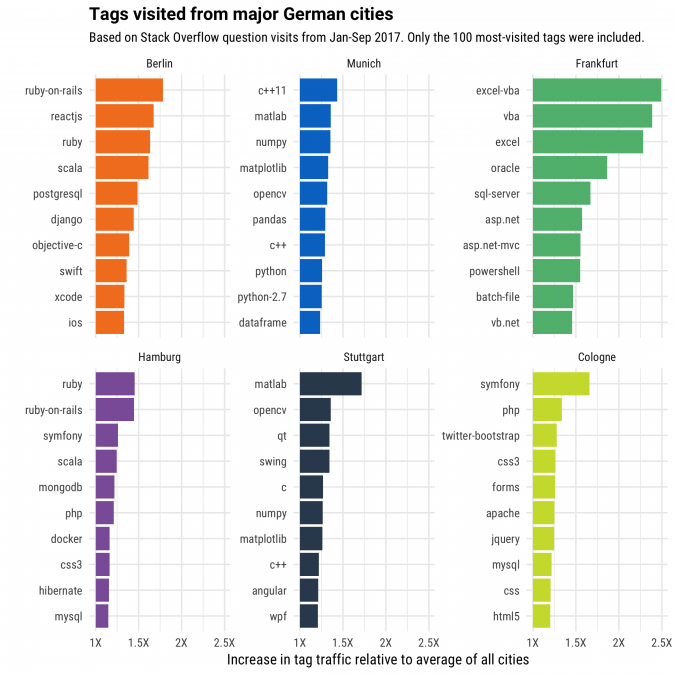 One of the most notable differences is that Frankfurt has a disproportionate number of visits to Excel, VBA, and Oracle, likely because of its status as a major financial center of Europe. We can see that Berlin and Hamburg are more likely to visit Ruby than the other cities, likely because they are hubs of startups and media companies. Munich and Stuttgart are each home to large universities, which may explain why they visit more MATLAB, C and C++ (Stuttgart is also known for its automobile production, including the headquarters of Mercedes-Benz and Porsche). We’d be interested in other insights from German software developers.

In future posts we’re planning to spotlight other countries, and examine what programming languages and technologies tend to be used there based on their Stack Overflow traffic.

If you’re a software developer in Germany, whether in Berlin, Munich, Hamburg, or elsewhere, and are looking to take the next step in your career, here are some companies hiring in Berlin and elsewhere in Germany right now on Stack Overflow Jobs.