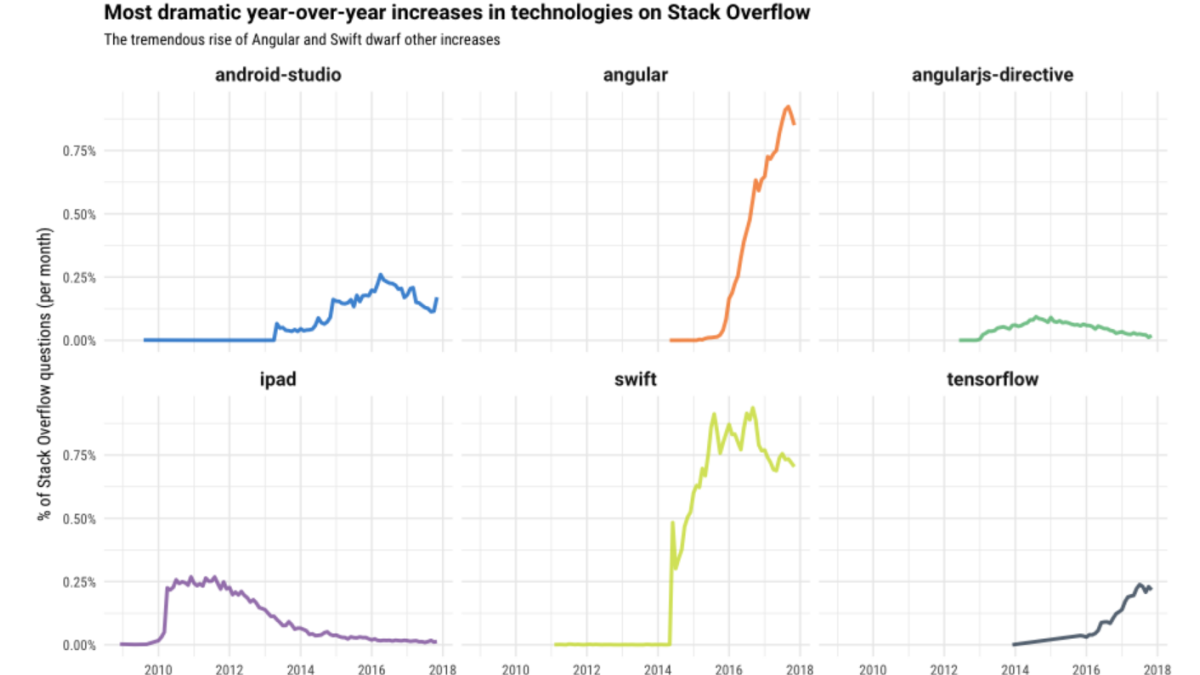 Life as a developer (or data scientist, in my case) involves being comfortable with changing technologies. I don’t use the same programming languages that I did at the beginning of my career, and I fully expect to be using different technologies several years from now. Here on the Stack Overflow blog, we’ve talked recently about technologies that are shrinking in popularity and those that are growing, but sometimes a programming language, framework, or technology comes out of nowhere and bursts on to the scene, or falls off a cliff. Sometimes there are dramatic shifts in a technology’s impact on the software industry. In this blog post, let’s explore the most dramatic rises and falls in Stack Overflow questions by tag since the site’s beginning.

To find the biggest growth, let’s look at year over year change in questions asked for tags in Stack Overflow. What tags have the highest percent change, in any year? 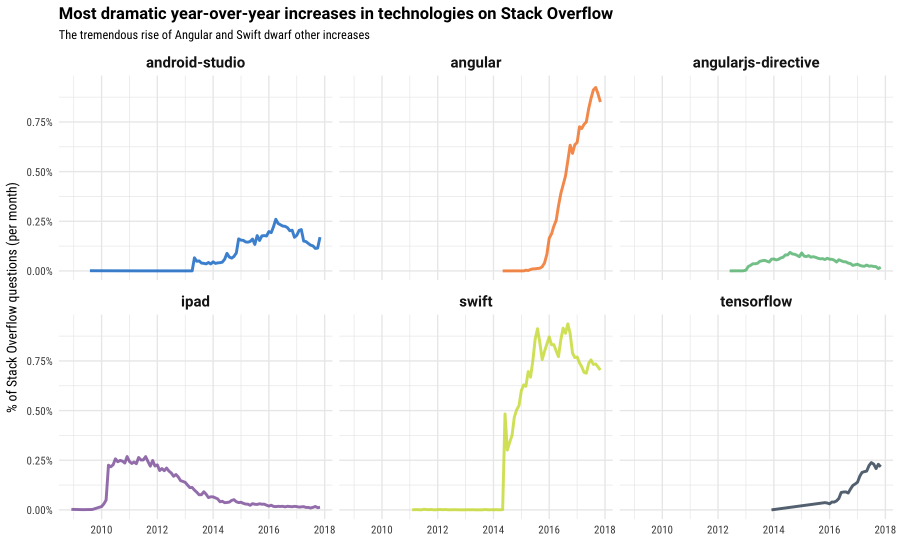 This analysis includes Stack Overflow tags with at least 10,000 questions and excludes tags that end in numerals like ios8.

Two tags stand out in this analysis, both with tremendous growth, and they have something in common. Swift is Apple’s language for developing iOS apps that is a successor to Objective-C, and the angular tag on Stack Overflow is used for newer releases than the angularjs tag. Both of these technologies grew incredibly fast to have a big impact because they were natural next steps for existing developer communities. (Note that AngularJS also grew incredibly fast, though, and has the 10th highest rate of year-over-year growth ever on Stack Overflow.)

The other technologies here exhibit comparatively modest year-over-year growth, but are all interesting examples of what kinds of things can happen in our industry.

Android Studio is an IDE targeted to mobile developers; it was first released in 2013 and grew immediately in popularity. The angularjs-directive tag is obviously related to the massive growth of Angular. The iPad was announced by Apple in 2010, and the machine learning library TensorFlow was released as open source by Google in 2015. We see from this plot what remarkable success looks like for a new technology.

What about the other side of the coin? What tags have the largest percent decreases, in any given year? 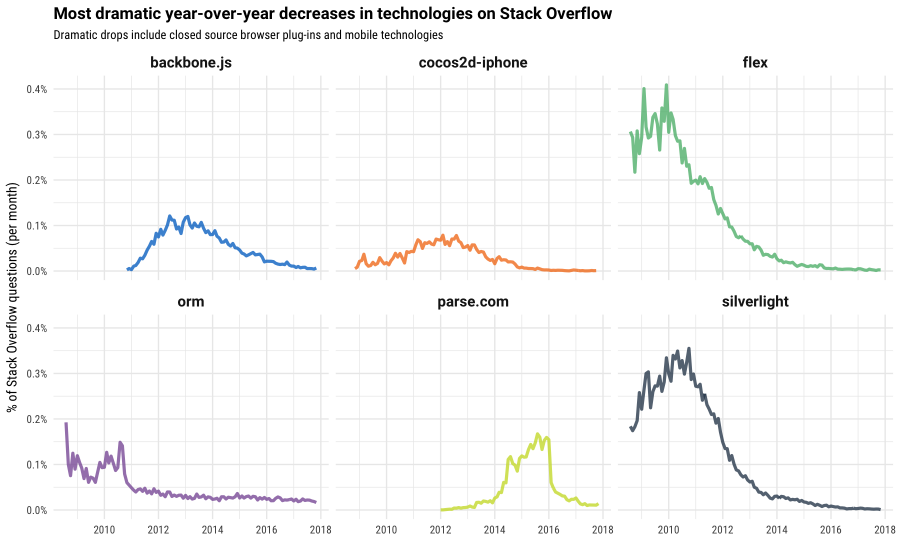 Like the first plot, this includes Stack Overflow tags with at least 10,000 questions and excludes tags that end in numerals like ios4 and xcode6.

Backbone.js is a JavaScript framework, with the brutal lifecycle typical for that ecosystem, and the game engine Cocos2d for iPhone has fallen out of favor. Silverlight has been deprecated by Microsoft, and Flex is a framework for Flash, also on its way out. Both were featured in our post on shrinking technologies from August. The Object-Relational Mapping tag has a higher level of post-peak activity than the other tags here, but is dramatically lower than about a decade ago.

Parse is a pretty interesting example here. Parse is a mobile backend developer platform that was acquired by Facebook in 2013; Facebook announced it was shutting down the platform in (you can probably guess this) January 2016. Parse was open sourced in the meantime. I like Parse as the flipside of the examples like Swift where a new technology is announced; Parse was a growing, apparently popular platform and its shuttering was announced.

Technologies can exhibit dramatic shifts like we’ve discussed, but some technologies grow at a more steady rate. What Stack Overflow tags have exhibited the most sustained growth since 2010, with questions in at least 5 years? Let’s look at the median annual growth for tags with at least 10,000 questions and find technologies that have grown at a high level over many years, not only in a burst. 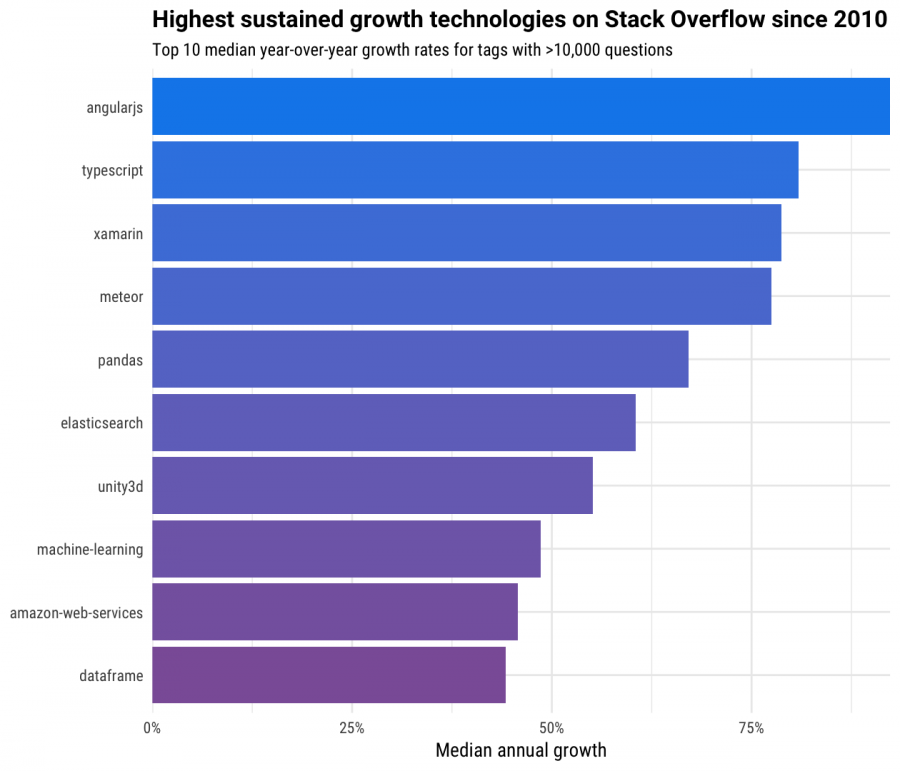 Here we see the first Angular tag, along with other JavaScript ecosystem members like TypeScript and Meteor. Several of these technologies are connected to the growth of data science and machine learning, including Pandas and the dataframe tag. Others occupy unique positions in the software industry, such as the ubiquitous search engine Elasticsearch and the game engine Unity. These technologies are diverse, but they all have grown at strong and steady rates over the past 5 to 7 years. Check out the Stack Overflow Trends tool to see what their growth patterns look like.

Here at Stack Overflow, we understand how technologies in the software industry rise and fall, and we have data to see these changes first hand. We use our data and expertise to help our clients make better decisions when engaging with developers. Check out how we can help you! 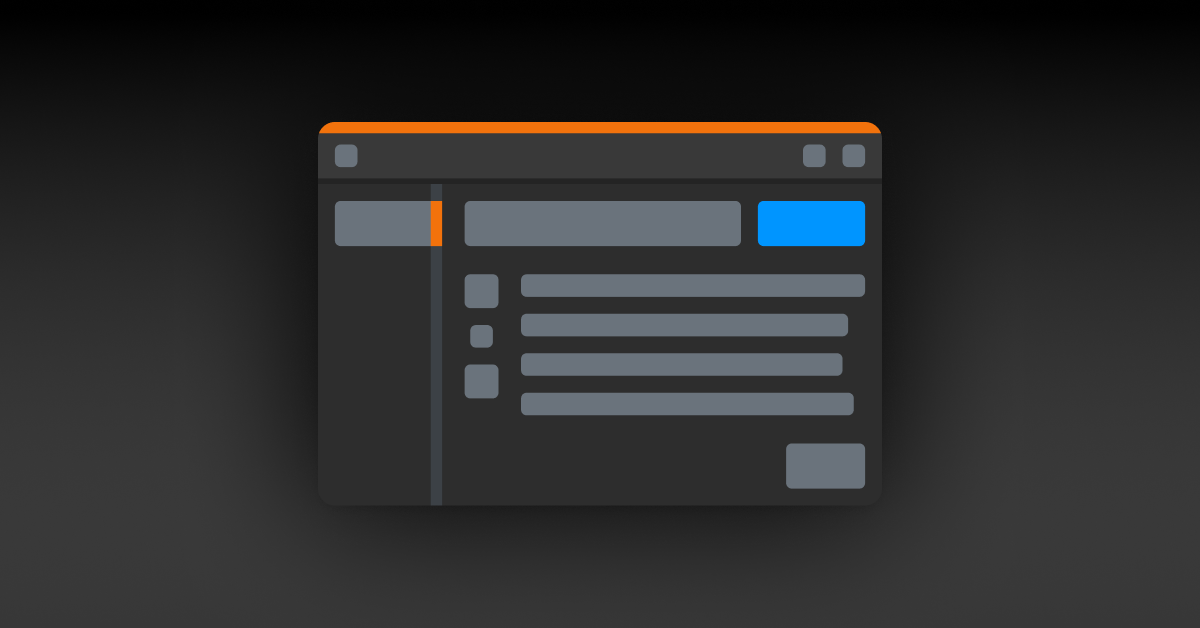 On March 30, 2020, we enabled folks to opt into a beta dark mode on Stack Overflow. Let’s talk about the work that went into it. 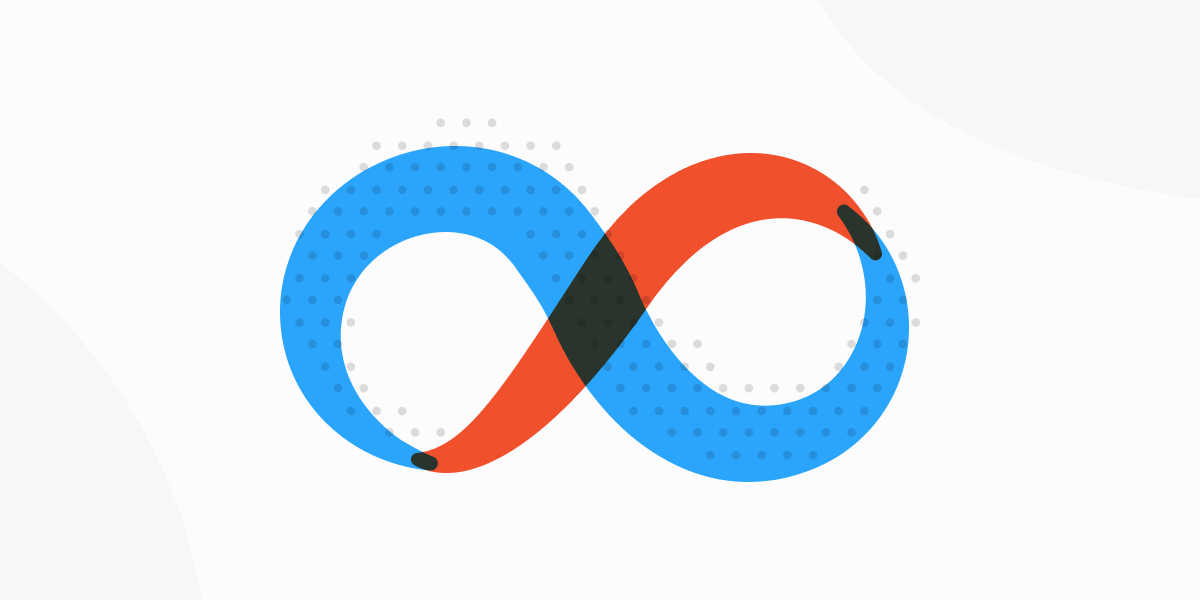 DevOps has become one of those buzzwords with many conflicting definitions. What’s for certain is it’s on the rise. In our 2020 developer Survey, around 80% of the respondents believed that DevOps is at least somewhat important. We take a look at the phenomenon, some definitions, and talk to our engineers about some of the…