Thanks a Million, Jon Skeet! 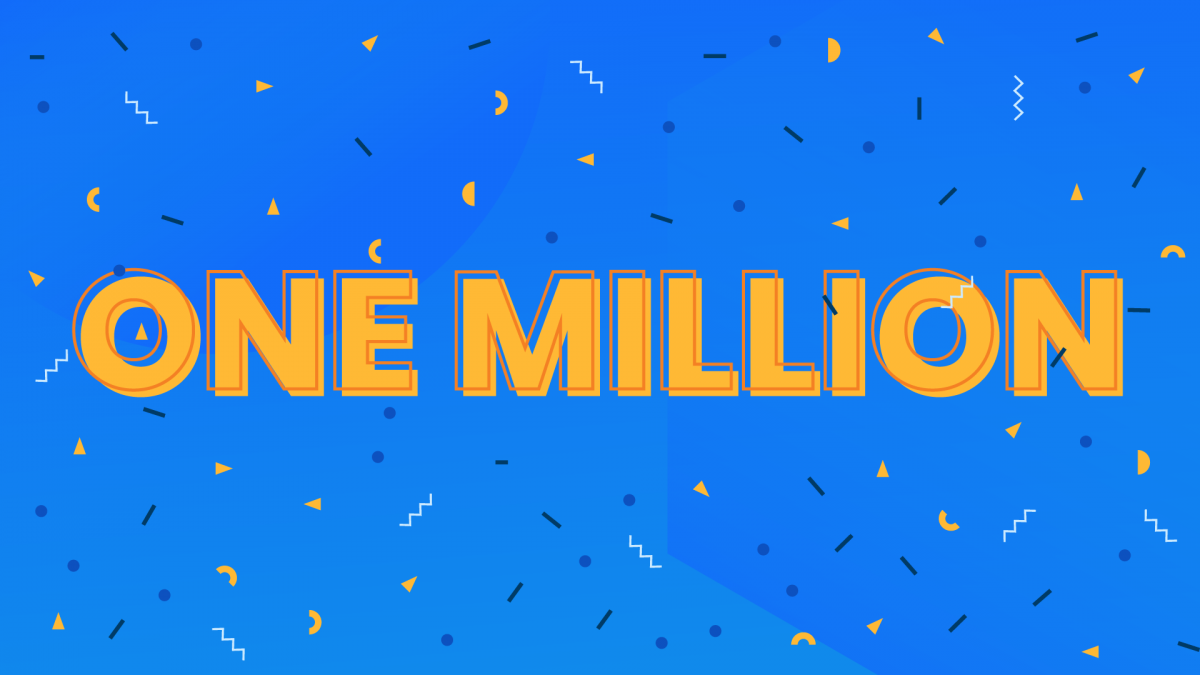 Yesterday, Jon Skeet’s reputation on Stack Overflow passed 1,000,000. ONE MILLION. Those of you who are highly engaged with the Stack Overflow community probably have a general idea of a) who Jon Skeet is and b) exactly how amazing and ridiculous this statement is, but just to make sure we are all on the same page, let’s dig a little deeper. For starters, how many answers has Jon Skeet posted on Stack Overflow? Let’s look at Jon, together with the other 100 folks who have the highest reputation on our site. 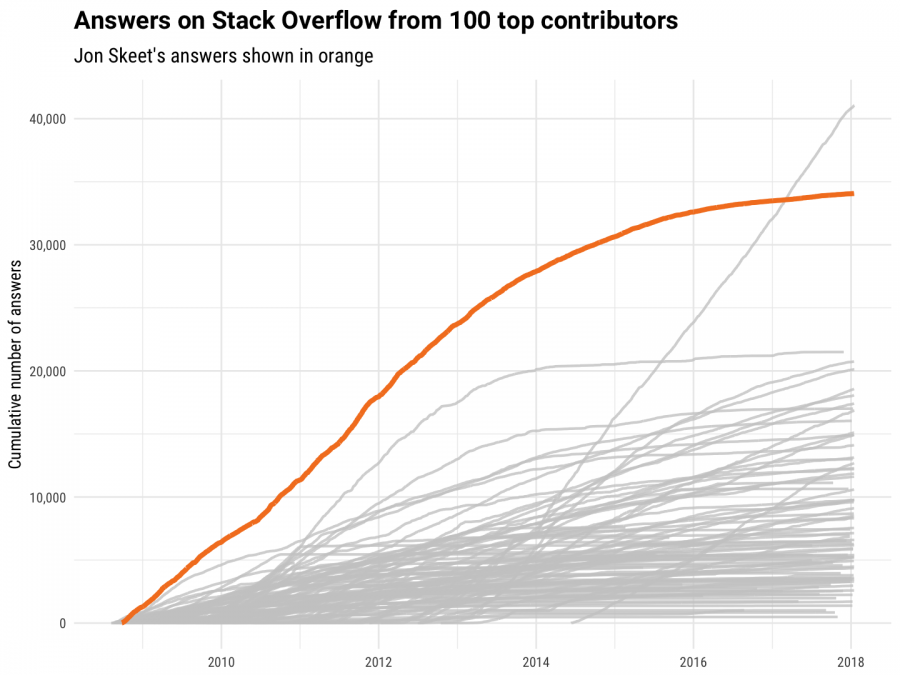 Jon is a software engineer and author. He joined Stack Overflow in 2008, during our website’s first months of existence, back when it looked something like this. In the near decade since then, Jon has answered over 34,000 questions, which works out to about 10 questions per day! What have the topics of these questions been, as assessed by the tags on the questions? 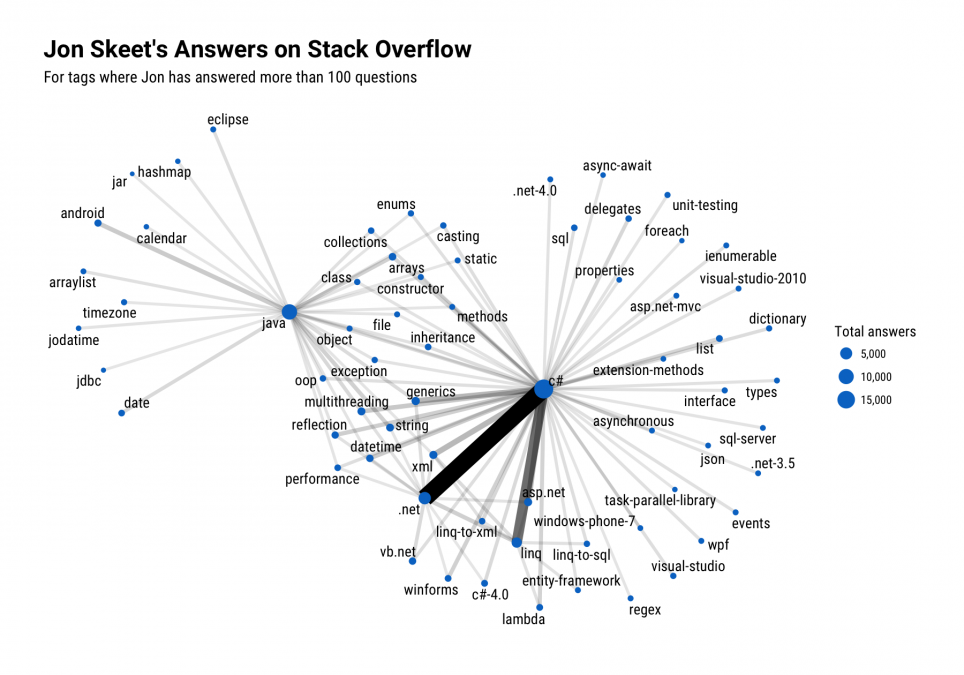 In this graph, tags with larger points are used more often, and heavier connections indicate tags used more often together on individual questions. We see Jon’s focus on C# and .NET, as well as Java. Indeed, Jon has had a significant impact on these communities here on Stack Overflow, which were especially important during Stack Overflow’s early years when the community here had a strong Microsoft and C# flavor to it. If we focus just on C# for a moment, 18,694 of Jon’s answers have the C# tag; these account for over 1.5% of all C# answers here on our site. From one person!

Who asked all those thousands of questions that Jon Skeet has answered? First, let’s look at the age of the question asker’s account, at the time that they posted the question here on Stack Overflow. 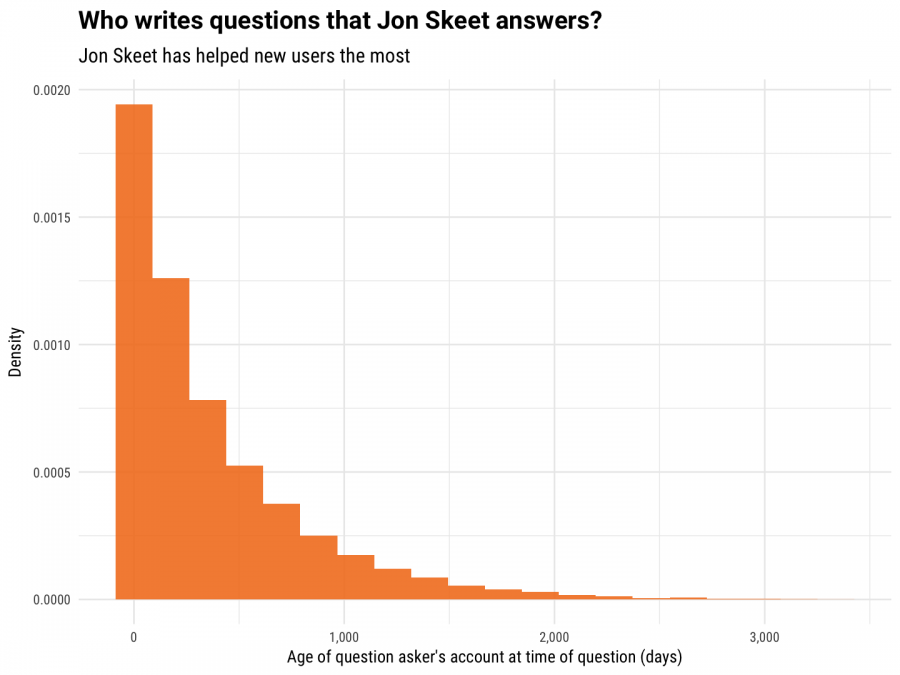 Like most experienced contributors on Stack Overflow, Jon Skeet has helped newer users the most. In fact, 21.9% of the users who asked a question that Jon Skeet answered had an account that was less than one month old. If you are a new user on Stack Overflow with a question to ask, check out Jon’s resources on best practices for question writing. Writing a question well makes it more likely that the community can help you. 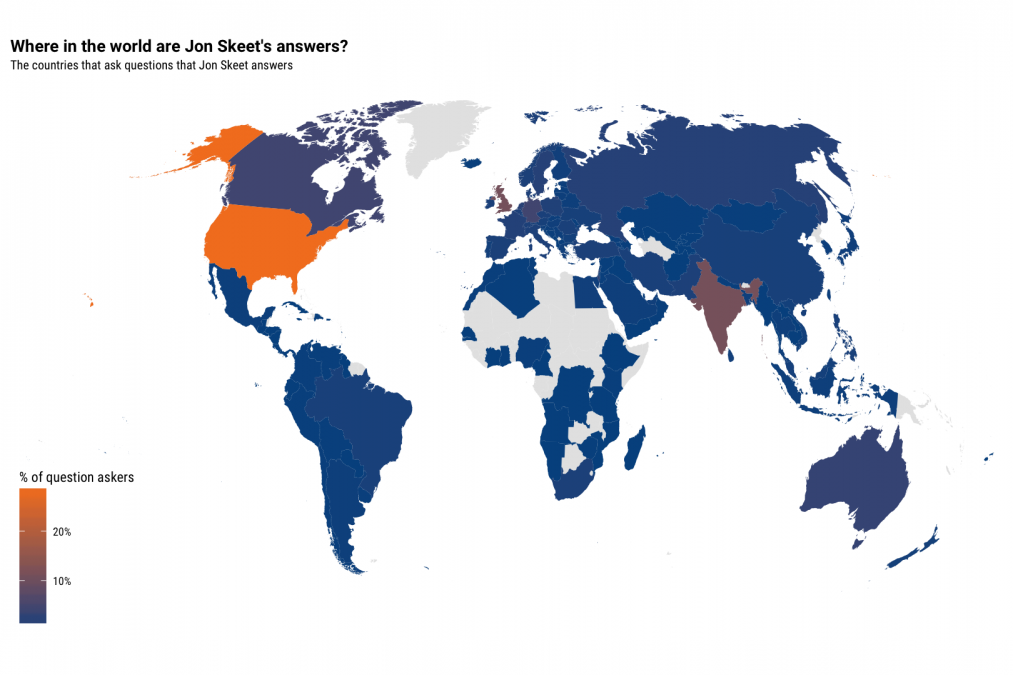 Most of the questions that Jon answers come from users in the United States (28.7%), India (11.1%), and the UK (10.9%). Notice that developers all over the world have gotten help from Jon Skeet, though, on six continents and in over 150 countries. The Stack Overflow community is global, and we all benefit from the worldwide network of programming knowledge being shared here.

The impact of Jon’s answers reach far beyond just getting an answer for the initial programmer who asked a question. These answers exist now as publicly available knowledge for everyone to learn from. How many people have found these answers useful to date? It is tough to measure this precisely, but let’s just ponder that the fact that there have been 374,173 useful votes on Jon’s answers. His highest voted answer has 8,985 useful votes.

Jon was most active on Stack Overflow in terms of answering questions in our site’s earlier years, and most active in commenting for several years after that. Because of the way reputation is earned, he continues to gain reputation points at a quick clip.

If you write constructive, helpful answers for the Stack Overflow community, they are the gift that keeps giving when it comes to reputation; users who find these answers via searches will continue to upvote them and you will continue to gain those points +10 at a time, like Jon has.

But wait! Maybe you look at this plot and feel a sense of impending panic because Jon Skeet is not answering questions as often as he used to. Don’t worry; Jon is still personally invested here in the Stack Overflow community, as those hundreds of comments a month attest. Also, we have used the POWER OF MACHINE LEARNING to provide you with those Jon Skeet answers that you need. We have trained a Markov model on all of Jon Skeet’s answers here on Stack Overflow and now provide this valuable tool to you here. Just type in your question, and contemplate the insightful coding advice our Jon Skeet bot can provide you.

Our Jon Skeet bot was trained using the Markovify package developed at BuzzFeed, and ported to R in the markovifyr package.

If the answer you just got was perhaps less than satisfying (although I’m not sure how that could be possible), or if you want to be the next Jon Skeet and share your knowledge, come to Stack Overflow and join the world’s largest community of developers.

Winter persists, but Winter Bash 2019 has drawn to a close!

by Cesar Manara on January 15, 2020
We had a ton of people participate in Winter Bash this year with 266,000 hats awarded throughout the network. Thank you, everyone! We couldn’t have done it without you.
Continue reading

The Loop #1: How we conduct research on the Community team

by Donna Choi on December 11, 2019
If you work on a product that’s ever benefited from research – whether that’s talking directly to users, analyzing experiment data, or any number of other research methods – you...
Continue reading 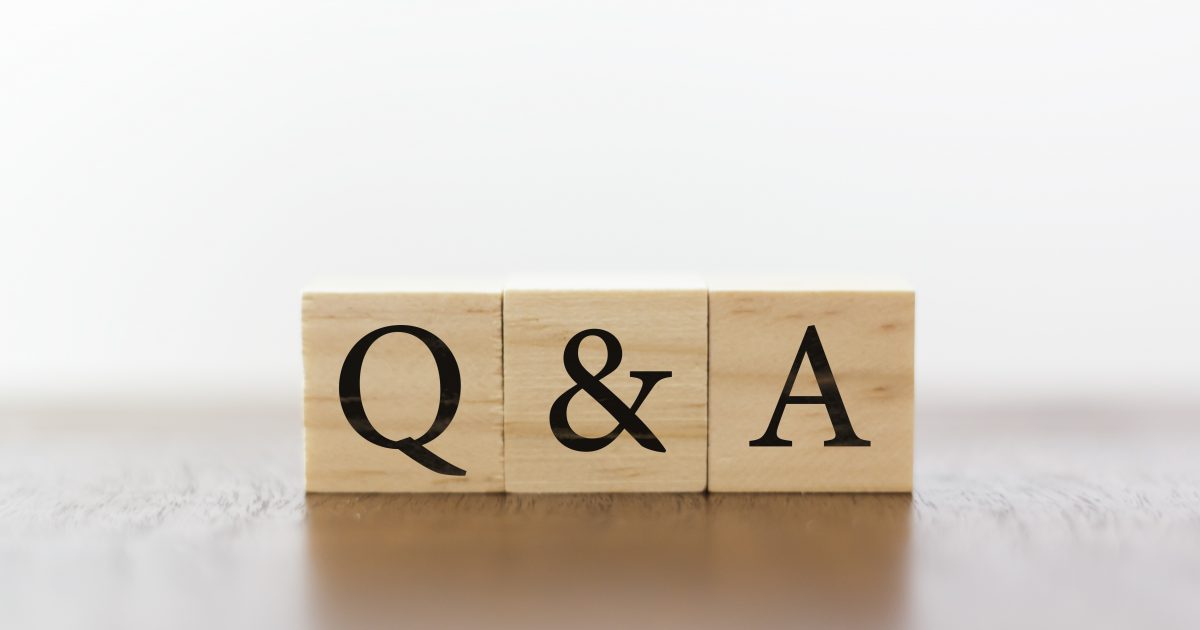 This Week #StackOverflowKnows About Infinity, Internet-Speak, and Password Storage

by Ryan Donovan on December 6, 2019
We’re introducing this bi-weekly roundup of questions from around the network with the tag #StackOverflowKnows. Share yours on twitter.
Continue reading