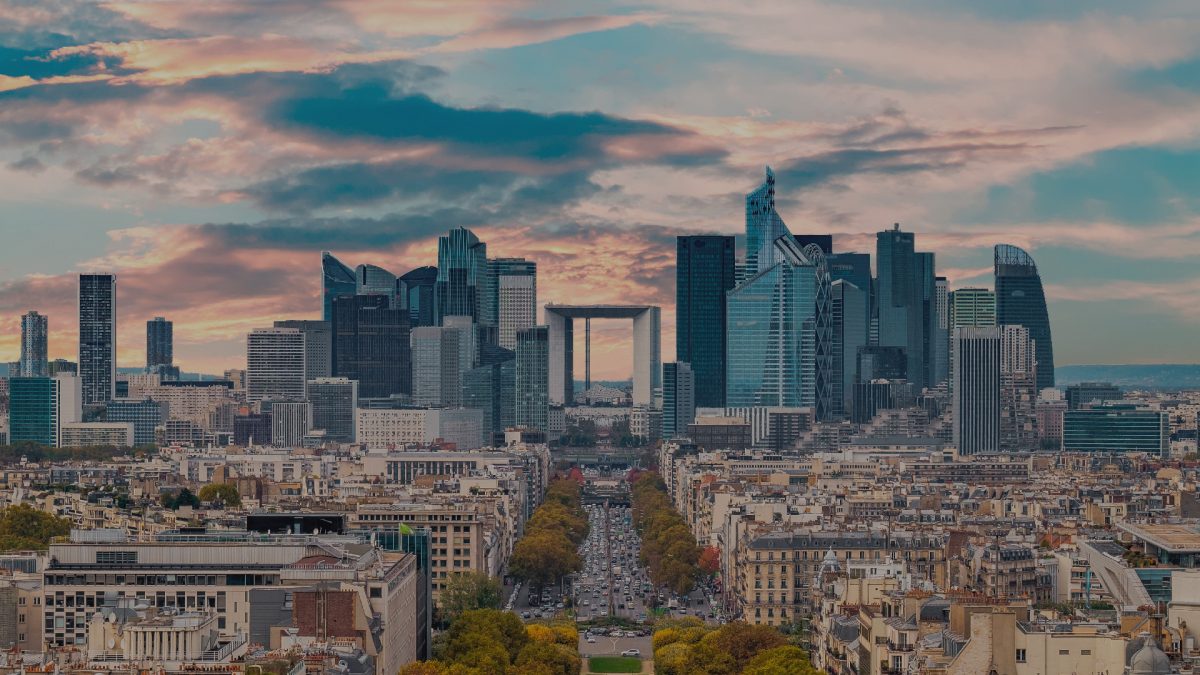 Software development is a global industry, and programmers everywhere rely on Stack Overflow to find solutions to their problems. But different countries use different languages and technologies, and these differences show up in their Stack Overflow visits. We’ve previously looked at what technologies are used in Germany more than other countries, finding that programmers in Germany tend to visit C and C++ more than the rest of the world.

In this post we’ll take a look at programmers in France as seen by their Stack Overflow visits. We’ll see how the programming languages and technologies they use differ from the rest of the world, and how they differ within the country.

France is responsible for 2.91% of global Stack Overflow question visits, which makes it the 6th largest source of traffic in the world. It’s also responsible for asking 2.49% of questions (6th most) and writing 3.11% of answers (5th most).

The languages and technologies a country’s developers use tend to reflect the needs of its software development industry. What do French developers work with more often, or less often, than the rest of the world? 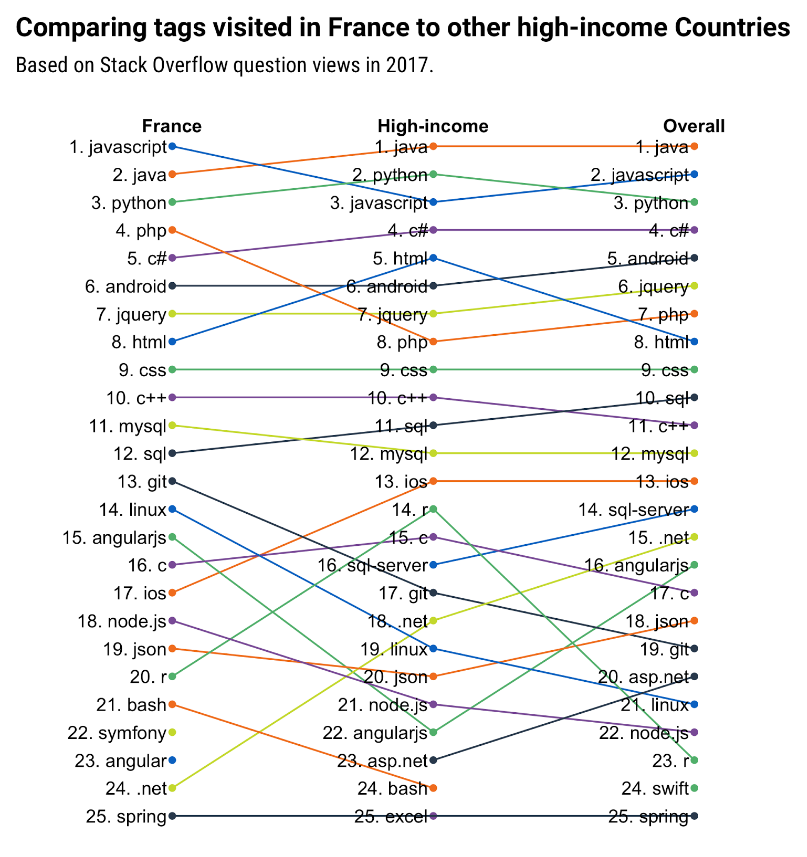 The most notable differences are that France tends to visit more Javascript and PHP. In particular, PHP is the 4th most-visited tag from France, while only the 8th most-visted from high-income countries in general. Node.JS and AngularJS are also notably over-represented. A few tags that appear underrepresented from France include iOS, R, and .NET.

The above graph shows only the 25 highest-traffic tags in each region. Among the 100 most-visited tags, which were most over- or under-represented in French traffic to Stack Overflow, compared to high-income countries in general? 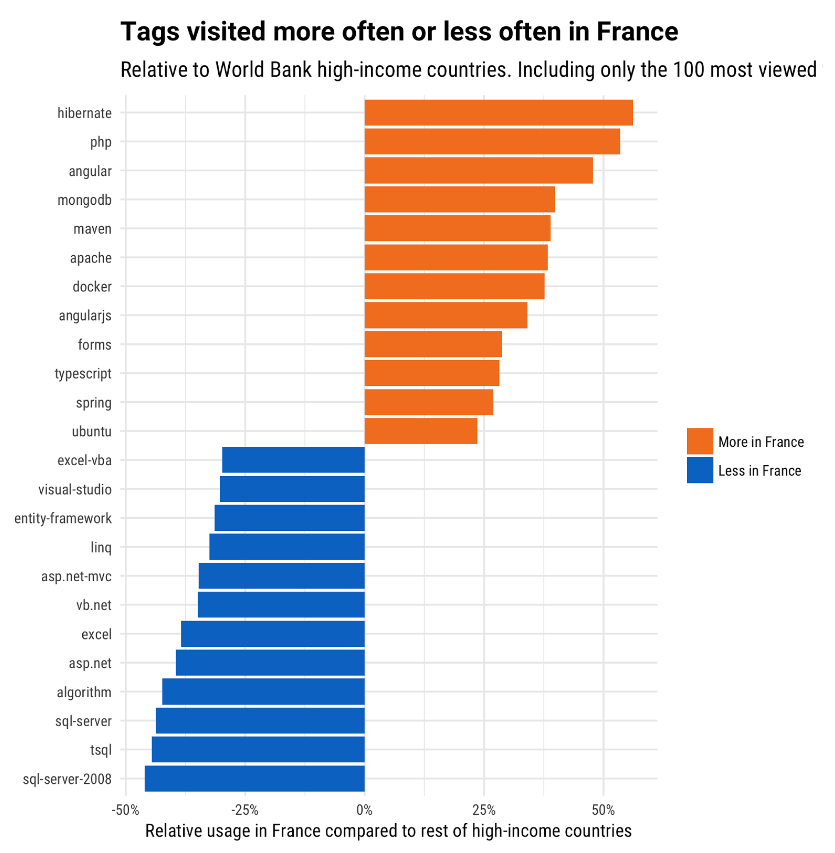 As we saw in the previous graph, PHP is one of the most disproportionately visited tags from France, along with the Hibernate ORM for Java. Several other web-related tags, like Angular/AngularJS and TypeScript, are also visited more than they are in the rest of the high-income world. This could suggest web development is an unusually common occupation in France relative to other kinds of programming. The presence of Apache, Docker, and Ubuntu could also represent system administrators or DevOps engineers.

Interestingly, almost all of the most underrepresented tags are Microsoft technologies, including SQL Server, ASP.NET, and Excel. This is somewhat similar to what we found about Germany, suggesting both countries use the Microsoft stack less often. In fact, Germany and France are among the countries that visit ASP.NET the least worldwide (countries that visit ASP.NET disproportionately often include the United Kingdom, India, and Brazil).

In our last analysis, we compared the tags visited by two of the largest cities in Germany, Berlin and Munich. That’s not as useful here, because French visits are entirely dominated by Paris and its surrounding suburbs. Sixty percent of France’s Stack Overflow traffic comes from within 50 miles of Paris (the next largest cities, like Lyon and Toulouse, each made up about 5%), which isn’t surprising because that’s where the population is most concentrated. (One exception is Marseille, which makes up only 3% of traffic despite being France’s second largest city).

How does Paris differ from the rest of France in terms of the tags developers visit? 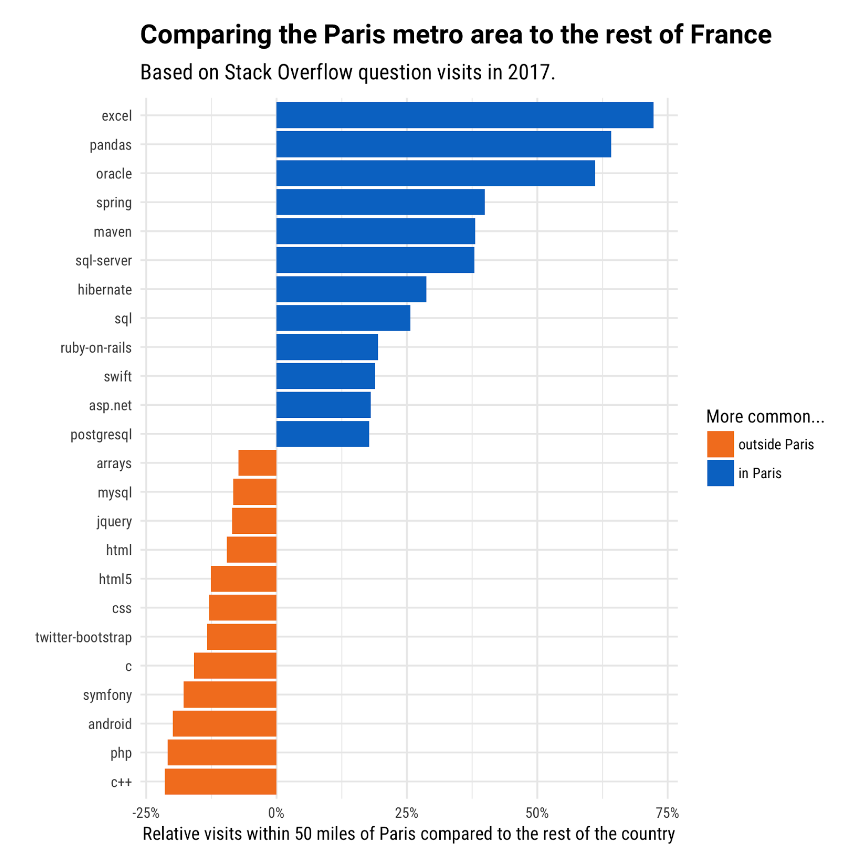 Paris is clearly the center of the finance industry within France: it visits Excel far more than the rest of the country, as well as the pandas data science framework. The presence of several Microsoft-related tags, like SQL Server and ASP.NET, suggest that while the use of the Microsoft stack is relatively rare within France, what visits do occur tends to be in Paris.

We saw earlier that France visits PHP more than the rest of the high-income world, and this graph shows that much of this comes from outside of the Paris area, as Paris visits about 25% less PHP than the rest of the country. If PHP isn’t unusually often visited from Paris, then where is it visited from? We can compare the amount of traffic to the PHP percentage for each city. 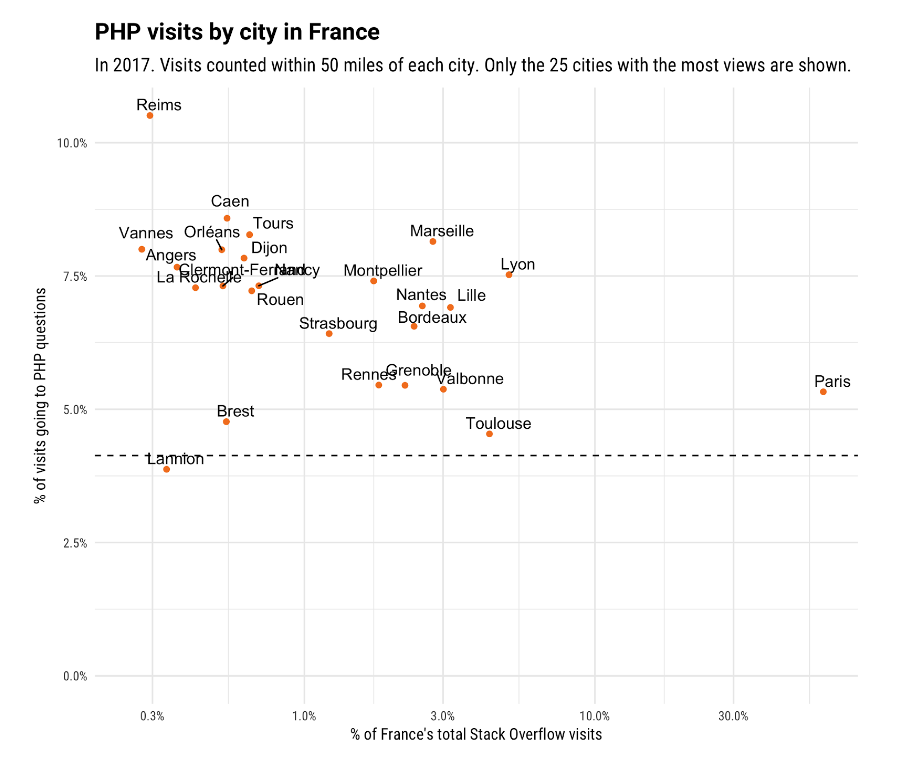 PHP makes up 5.33% of Paris’s traffic, which is only a little above average for high-income nations, but this is one of the lowest percentages of any city in France. Large French cities such as Lyon and Marseille visit a disproportionate amount of PHP. The cities that visit less, such as Toulouse and Brest, are generally university towns (PHP is a relatively uncommon language both for undergraduate classes and for research).

If you’re a software developer in France, whether in Paris or elsewhere in the country, and are looking to take the next step in your career, here are some companies hiring in France right now on Stack Overflow Jobs.