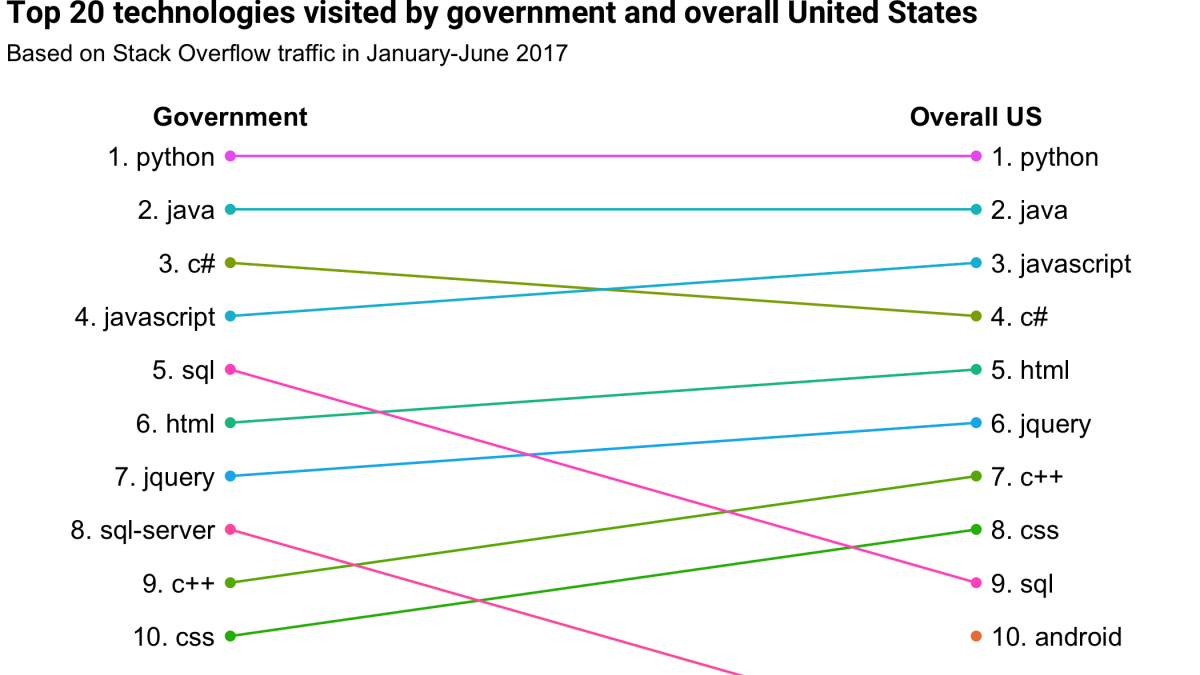 With the D.C. area in the middle of Microsoft Inspire, one of the year’s biggest tech events, we thought it might be interesting to see how developers working in government stack up with developers in other industries in terms of what technologies they use on a daily basis.

At Stack Overflow we’re able to segment our US traffic by industry (by matching IP address to ISP), as part of our mission to better understand and serve developers. One of the sectors we can examine is government employees, who make up about 3.5% of US traffic to Stack Overflow. This category is comprised of

Here we’re sharing some trends we can see among software developers working for the public sector, how the tools and technologies they use differ from those used by the rest of the country, and how the sector has changed over the last year. Note that all the data shown here is aggregated across hundreds of thousands of visitors across thousands of government organizations (with no organization making up more than about 5% of the overall traffic), so we’re looking only at aggregate trends.

We’ve shared data before on what languages and technologies are most asked about or visited on Stack Overflow, most notably in the Stack Overflow Trends tool. These give a snapshot of what tools software developers are using today. 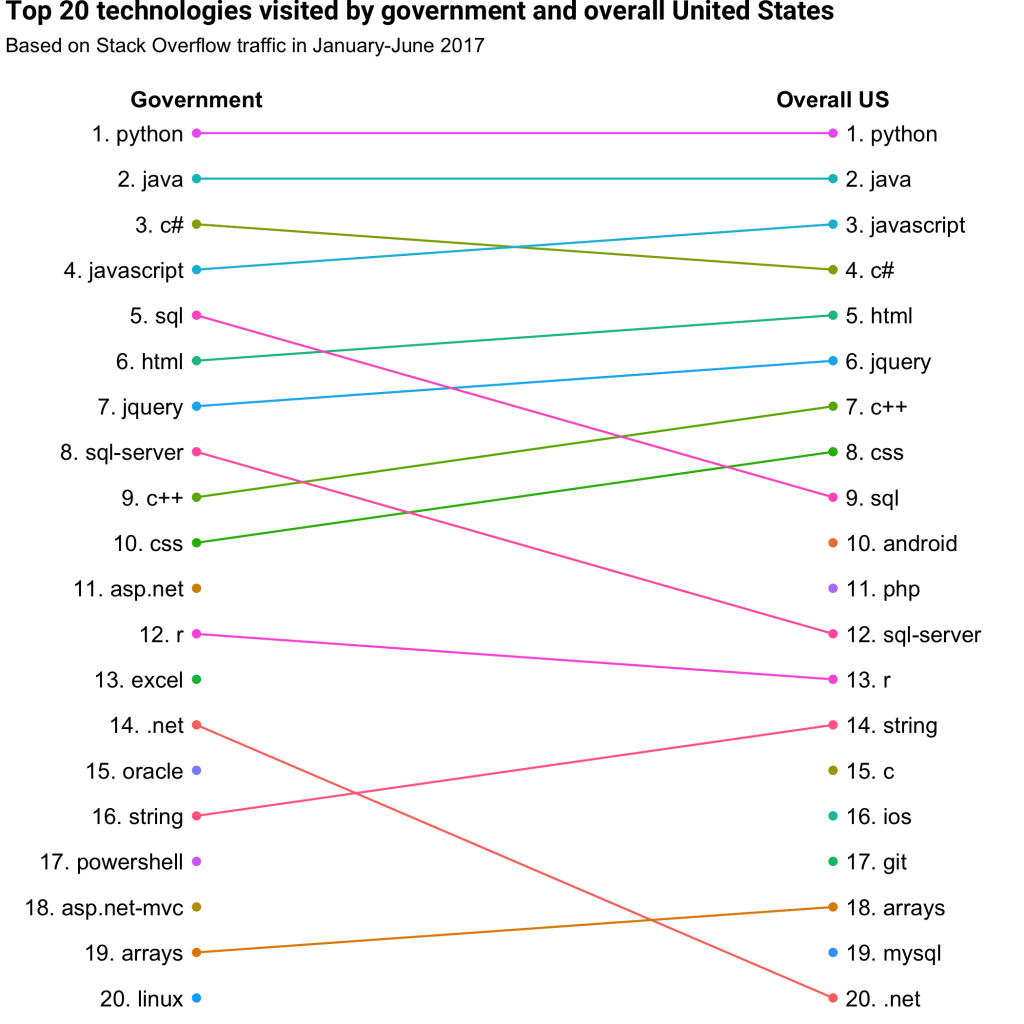 We can see that the lists have a lot in common: Python and Java are the two most visited languages, followed by C# and Javascript. However, several technologies show notable differences. SQL, SQL Server, and .NET are more visited from government agencies than the rest of the US, while Android is very low among government technologies despite making the top 10 in the US overall.

Among notable programming languages and platforms, what was the difference in Stack Overflow traffic between government and the private sector? 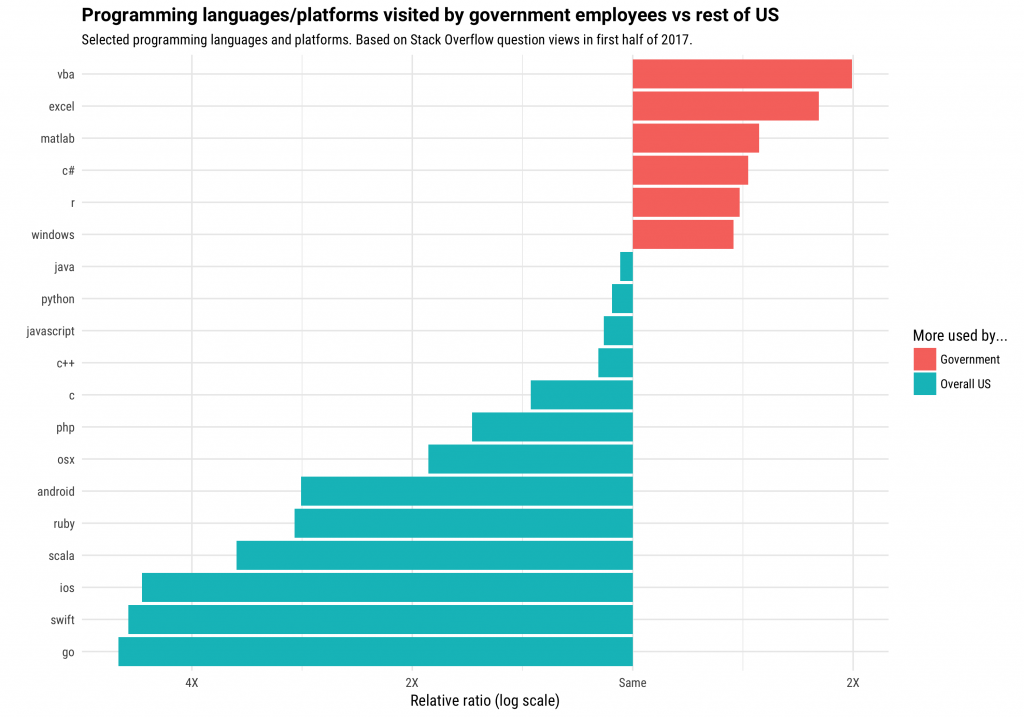 Technologies more used in the public sector included Microsoft products like Excel, VBA, C# and Windows, as well as the scientific programming languages R and MATLAB. Java, Python, Javascript and C++ were used to roughly equal extents. There were several technologies government programmers barely touched at all, including mobile technologies like Android, iOS, and Swift, and particularly the programming languages Go, Scala and Ruby.

Besides programming languages and platforms, we may be interested in what databases the public sector works with. 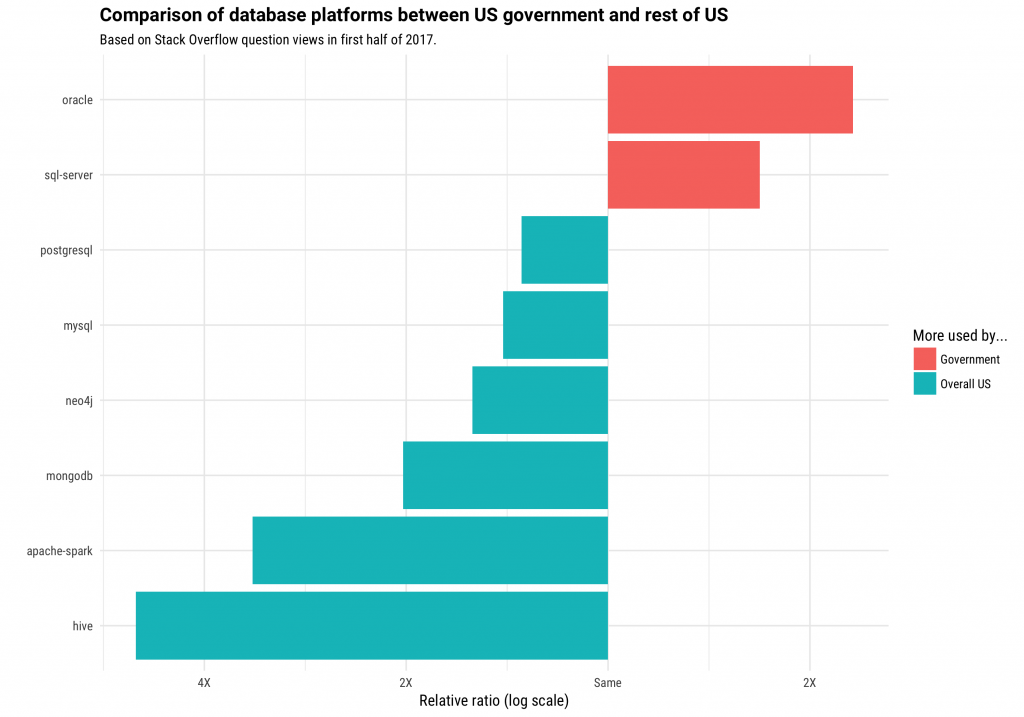 What technologies have been growing within the government sector?

We’ll compare the first half of 2016 (January-June) to the first half of 2017 to estimate the year-over-year growth (as a percentage change) in visits to questions about each technology. We’ll consider only the 100 tags that were most visited (across both years), and compare the average to the change. This helps us examine both which technologies are commonly used, and which increased or decreased the most. 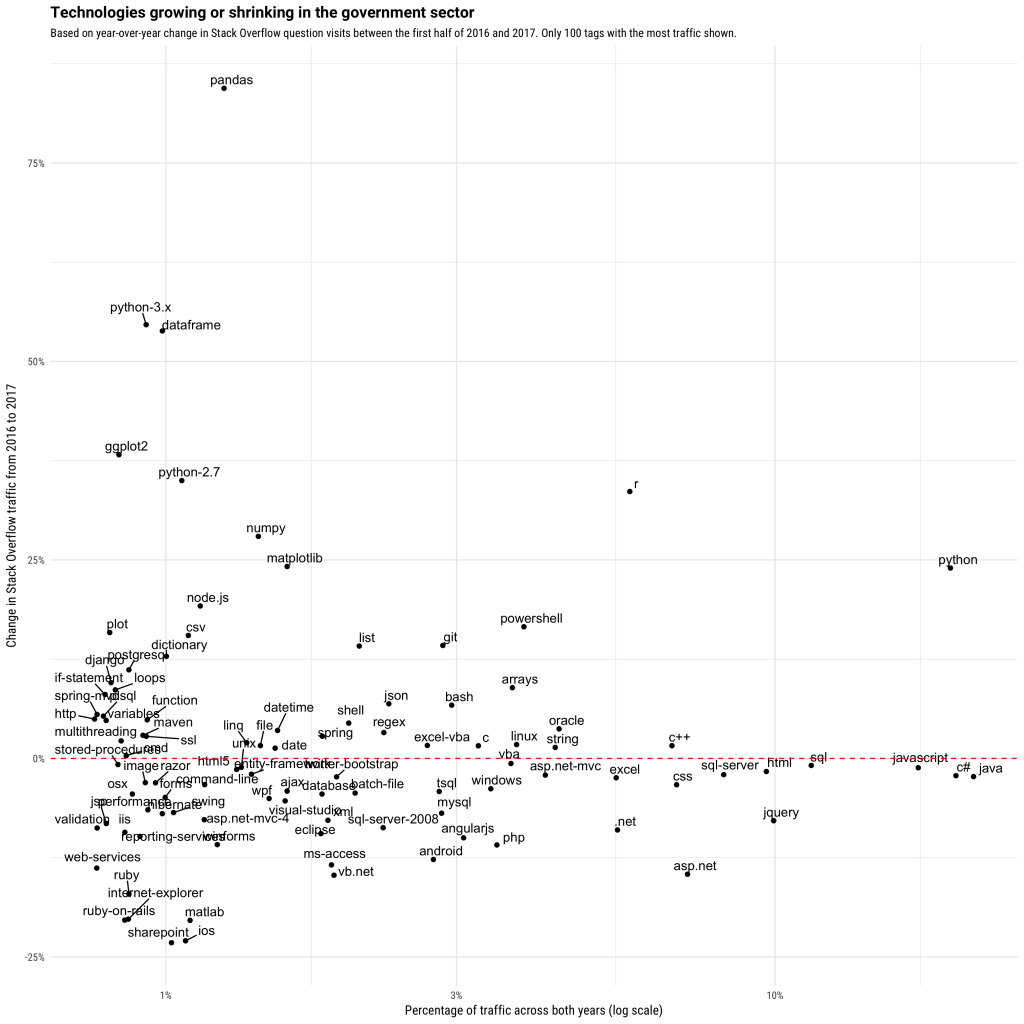 The clear theme is an increase in technologies used in data science and analysis— it looks like that has become a growing part of programming in government work.

Two programming languages that stand out are Python and R, both popular for data analyses. The Python data science framework pandas is the fastest growing tag by far: it nearly doubled in traffic from 2016 to 2017. The Python libraries matplotlib and numpy are also growing, as is the R visualization package ggplot2.

Not all technologies associated with data analysis are growing. Excel has stayed steady, and MATLAB (which was already a fairly small percentage of government traffic) has been shrinking.

Most major programming languages (like Java, Javascript, C#, and C++) have stayed steady since 2016 in terms of their share of government traffic, though it’s worth noticing that traffic to PHP and Android have declined about 10%. Traffic to Oracle has seen a small uptick, suggesting it will continue to be a popular choice as a government database technology.