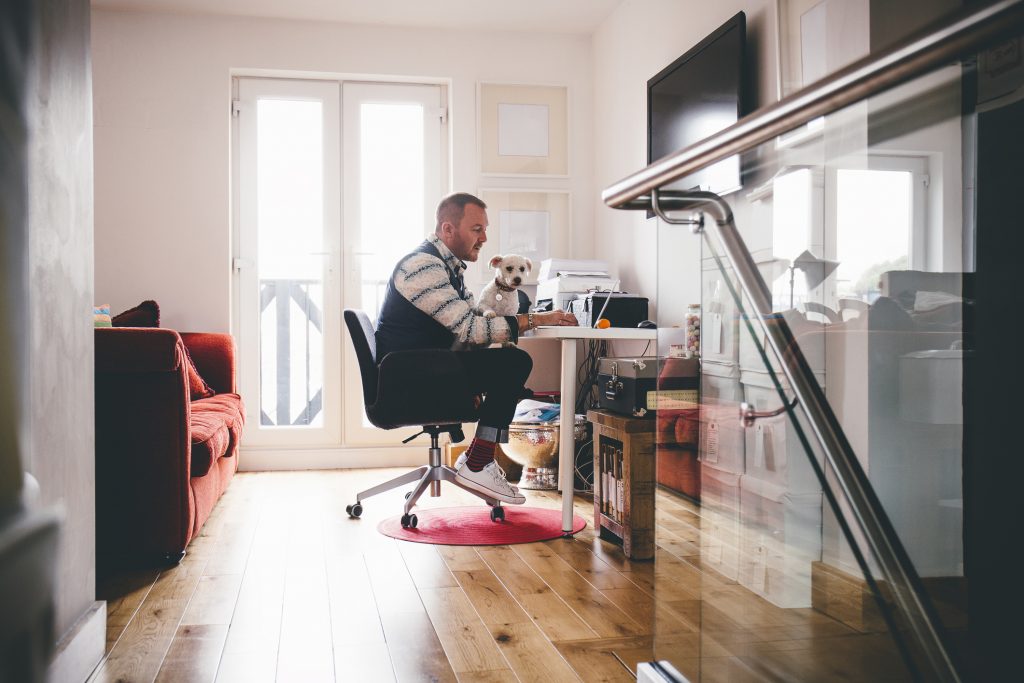 You already know we at Stack Overflow are big fans of remote work. Today we’re featuring a post by a friend at Owl Labs; it’s a great argument in support of remote work, and Owl Labs, whose mission is to improve collaborative meetings for remote employees everywhere, is holding a virtual panel on supporting remote workers next week.

Chris’s story sounds a lot like my own. I’m a small town girl who for the first decade of my career was limited by geography, until I discovered remote work and a world of opportunity opened up. But enough from me…here’s Chris!

Chris Hudson is a Senior Embedded Linux Engineer at Owl Labs. Learn how to better support your remote employees at their upcoming virtual panel: How to Support Remote Work & Decide What’s Right for Your Team.

My name is Chris Hudson, and I currently live in a little suburb outside of Austin, Texas. Like many people, I choose to live in the suburbs to raise my family while avoiding the hustle and bustle of the city. I’m really a country boy at heart, and things like crowds and tall buildings make me feel claustrophobic.

I didn’t always live in Texas. I originally grew up in small-town central New York. I developed an affinity for math and science at an early age, and my parents would say, “You should be an engineer like your grandfather.” When it was time to choose a major in college, Computer Engineering seemed like a natural fit.

A few years later when entering the workforce, almost all job opportunities either called for software engineers (Computer Science majors) or hardware engineers (Electrical Engineering majors), but I was interested in both. I eventually found a position working on these things called “device drivers” at a smallish startup, and it was the perfect introduction to embedded software engineering, an often-overlooked yet vital field that provides the interface between hardware devices and software applications.

There was only one core issue. The job market for Embedded Software Engineers in central New York was quite limited. The tech industry evolves quickly, and I was at risk of being stuck in the middle of nowhere with a skill-set that wasn’t in demand anywhere nearby. (At the time, the only opportunities were in the defense industry or at extremely large corporations.) If I wanted to work on new and exciting startup technology, I wasn’t going to find it there.

I came to the conclusion that if I wanted a rewarding career and continued financial security for my family, I needed to move to a more tech-centric part of the country.

When considering my prospects, I grouped them into two categories: Silicon Valley, and NOT Silicon Valley. Obviously the tech industry in Silicon Valley holds a wealth of opportunity, but that promise also comes with some of the most punishing drawbacks of overpopulation: high cost of living and excessive traffic congestion. While I’m sure I would find a great job, realistically I might not make enough to support my family without having to commute for hours per day.

Eventually, I found a position with a large tech company in the Austin area and moved away from home. A big cross-country move could be considered a rite of passage. For me, picking up and leaving behind dozens of family members and decades of friends felt very unnatural. Sure it was an adventure, but I still missed home.

There Has to Be Another Way

When people are able to stay in their hometowns and make a good living doing what they love, I envy them. That didn’t seem possible with a career like mine.

For example, companies looking for my skill set are usually working on some sort of hardware. Imagine custom silicon, custom boards, or some combination of hardware and software that makes my unique expertise necessary.

Companies like this don’t grow on trees. Almost all of them are strategically located in high-population areas, because their complex projects need specific combinations of technical skills that only a large applicant pool can support. Your success in this field is literally limited by your proximity to these companies.

But what if you weren’t limited by your proximity? What if the right collaboration tools made working outside of the office possible, so remote team members were just as productive as local employees? What if companies could significantly expand their applicant pools without needing to choose a location near a major metropolitan area?

From my experience, remote employees are more likely to respect deadlines, priorities, and the time constraints of other team members. They are also afforded a unique ability to flex their work schedules around necessary life events, or even their own internal clocks (I’m looking at you, night owls), resulting in a workforce that is typically both happier and more productive.

There are other corporate benefits to this type of flexibility. It supports hiring and invites more diversity into the company culture. For example, how many potential engineers would love to enter the tech industry, but can’t stomach a move to a big city? How much diversity of thought would be available if you pulled employees from all across the United States?

I was recently asked why I felt such a strong connection to my current company Owl Labs and its mission. If I could answer in a word, that word would be “freedom.” The freedom for future companies to employ more productive remote team members.

The freedom for future employees to stop taking jobs based on where they live, and start choosing careers based on what they passionately want to do.

Ultimately, the freedom for future generations to lead vibrant and exciting lives without having to leave their hometowns and families behind, unless they wish to spread their wings.

I am thankful for the technology that we and others are developing, so remote employees can more easily contribute to the team, regardless of their location.

I can’t help but wonder, if this technology existed back when I lived in New York, would I have felt the need to move away from home? And what will happen when my children grow up? Will their career paths similarly lead them away from our family? I hope not.

I predict and hope that continued innovation in the remote collaboration space will transform the way we build the workforce. Just watch.

We’re pleased that so many other companies are joining the remote work movement; here are some of them that are hiring remote developers right now!

To continue the discussion on how to support remote work, save your seat for Owl Labs’s virtual discussion and webinar with speakers from InVision, MIT and Wayfair as they share best practices around remote work and debate their preferred remote work strategies.