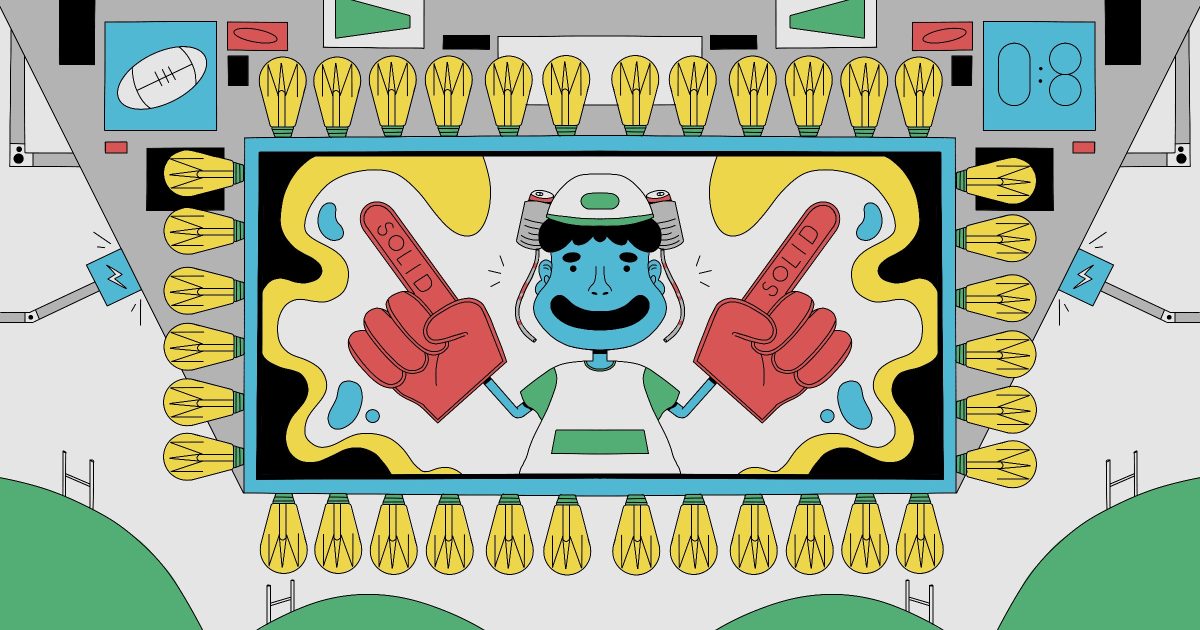 The SOLID principles are a time-tested rubric for creating quality software. But in a world of multi-paradigm programming and cloud computing, do they still stack up? I’m going to explore what SOLID stands for (literally and figuratively), explain why it still makes sense, and share some examples of how it can be adapted for modern computing.

SOLID is a set of principles distilled from the writings of Robert C. Martin in the early 2000s. It was proposed as a way to think specifically about the quality of object-oriented (OO) programming. As a whole, the SOLID principles make arguments for how code should be split up, which parts should be internal or exposed, and how code should use other code. I’ll dive into each letter below and explain its original meaning, as well as an expanded meaning that can apply outside of OO programming.

In the early 2000’s, Java and C++ were king. Certainly in my university classes, Java was our language of choice and most of our exercises and lessons used it. The popularity of Java spawned a cottage industry of books, conferences, courses, and other material to get people from writing code to writing good code.

Since then, the changes in the software industry have been profound. A few notable ones:

Taken as a whole, many of the things that SOLID really cared about—such as classes and interfaces, data hiding, and polymorphism—are no longer things that programmers deal with every day.

The industry is different in many ways now, but there are some things that haven’t changed and likely won’t. These include:

In the following sections, I will restate each of the five SOLID principles to a more general statement that can apply to OO, FP, or multi-paradigm programming and provide examples. In many cases, these principles can even apply to whole services or systems!

Note that I will use the word module in the following paragraphs to refer to a grouping of code. This could be a class, a module, a file, etc.

Original definition: “There should never be more than one reason for a class to change.”

If you write a class with many concerns, or “reasons to change”, then you need to change the same code whenever any of those concerns has to change. This increases the likelihood that a change to one feature will accidentally break a different feature.

As an example, here’s a franken-class that should never make it to production:

New definition: “Each module should do one thing and do it well.”

This principle is closely related to the topic of high cohesion. Essentially, your code should not mix multiple roles or purposes together.

Here’s an FP version of this same example using JavaScript:

This could also apply in microservice design; if you have a single service that handles all three of these functions, it’s trying to do too much.

Original definition: “Software entities should be open for extension, but closed for modification.”

This is part of the design of languages like Java—you can create classes and extend them (by creating a subclass), but you can’t modify the original class.

One reason for making things “open for extension” is to limit the dependency on the author of the class—if you need a change to the class, you’d constantly need to ask the original author to change it for you, or you’d need to dive into it to change it yourself. What’s more, the class would start to incorporate many different concerns, which breaks the single responsibility principle.

The reason for closing classes for modification is that we may not trust any and all downstream consumers to understand all the “private” code we use to get our feature working, and we want to protect it from unskilled hands.

New definition: “You should be able to use and add to a module without rewriting it.”

This comes for free in OO-land. In an FP world, your code has to define explicit “hook points” to allow modification. Here’s an example where not only before and after hooks are allowed, but even the base behavior can be overridden by passing a function to your function:

Original definition: “If S is a subtype of T, then objects of type T may be replaced with objects of type S without altering any of the desirable properties of the program.”

This is a basic attribute of OO languages. It means that you should be able to use any subclass in place of their parent class. This allows for confidence in your contract—you can safely depend on any object that “is a” type T to continue to behave like a T. Here it is in practice:

New definition: You should be able to substitute one thing for another if those things are declared to behave the same way.

In dynamic languages, the important thing to take from this is that if your program “promises” to do something (such as implement an interface or a function), you need to keep to your promise and not surprise your clients.

Many dynamic languages use duck typing to accomplish this. Essentially, your function either formally or informally declares that it expects its input to behave a particular way and proceeds on that assumption.

In this case, the function doesn’t care what type input is—only that it has a to_s function that behaves the way all to_s functions are supposed to behave, i.e. it turns the input into a string. Many dynamic languages don’t have a way to force this behavior, so this becomes more of a discipline issue than a formalized technique.

Here’s an FP example using TypeScript. In this case, a higher-order function takes in a filter function which expects a single numeric input and returns a boolean value:

Original Definition: “Many client-specific interfaces are better than one general-purpose interface.”

In OO, you can think of this as providing a “view” into your class. Rather than giving your full implementation to all your clients, you create interfaces on top of them with just the methods relevant to that client, and ask your clients to use those interfaces.

As with the single responsibility principle, this decreases coupling between systems, and ensures that a client doesn’t need to know about, or depend on, features that it has no intention of using.

Here’s an example that passes the SRP test:

This code will generally have only one “reason to change”—it’s all related to print requests, which are all part of the same domain, and all three methods will likely change the same state. However, it’s not likely that the same client that’s creating requests is the one that’s working on requests. It makes more sense to separate these interfaces out:

New Definition: “Don’t show your clients more than they need to see”.

Only document what your client needs to know. This might mean using documentation generators to only output “public” functions or routes and leave “private” ones un-emitted.

In the microservice world, you can either use documentation or true separation to enforce clarity. For example, your external customers may only be able to log in as a user, but your internal services might need to get lists of users or additional attributes. You could either create a separate “external only” user service that calls your main service, or you could output specific documentation just for external users that hides the internal routes.

Original definition: “Depend upon abstractions, not concretions.”

In OO, this means that clients should depend on interfaces rather than concrete classes as much as possible. This ensures that code is relying on the smallest possible surface area—in fact, it doesn’t depend on code at all, just a contract defining how that code should behave. As with other principles, this reduces the risk of a breakage in one place causing breakages elsewhere accidentally. Here’s a simplified example:

If you’re writing code that needs a logger, you don’t want to limit yourself to writing to files, because you don’t care. You just call the write method and let the concrete class sort it out.

New definition: “Depend upon abstractions, not concretions.”

Yep, in this case I’d leave the definition as is! The idea of keeping things abstract where possible is still an important one, even if the mechanism of abstracting in modern code is not as strong as it is in a strict OO world.

Practically, this is almost identical to the Liskov substitution principle discussed above. The main difference is that here, there is no default implementation. Because of this, the discussion involving duck typing and hook functions in that section equally applies to dependency inversion.

You can also apply abstraction to the microservice world. For example, you can replace direct communication between services with a message bus or queue platform such as Kafka or RabbitMQ. Doing this allows the services to send messages to a single generic place, without caring which specific service will pick those messages up and perform its task.

Good code is good code—that’s not going to change, and SOLID is a, well, solid basis to practice that!