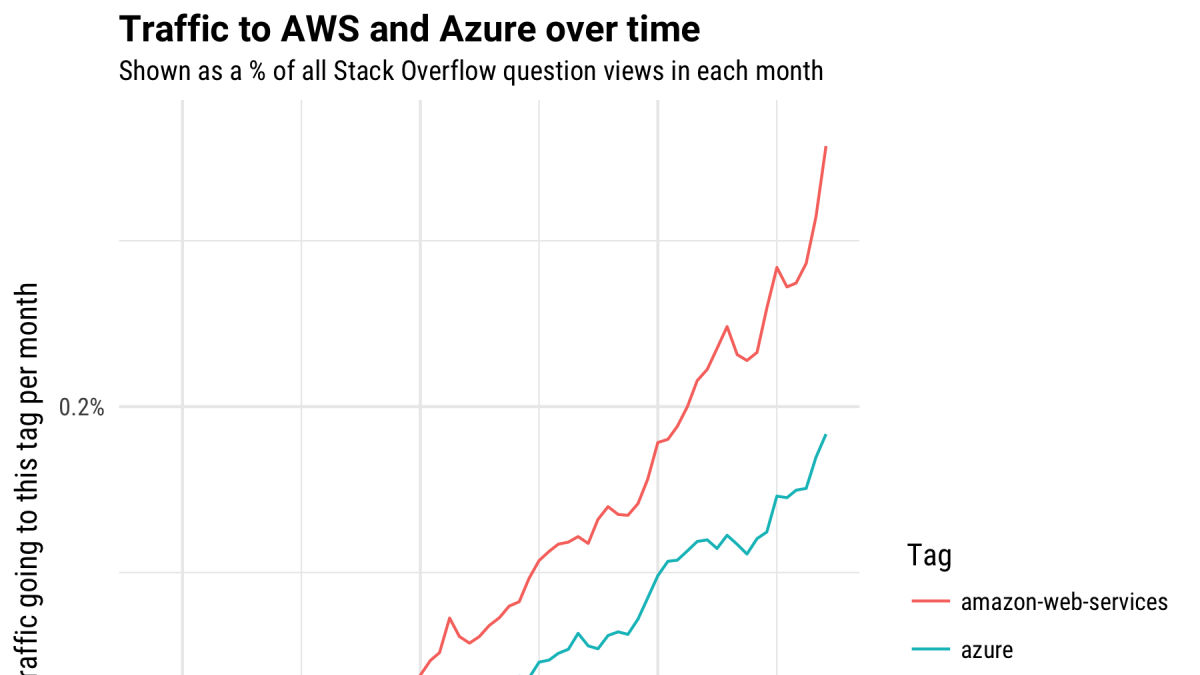 Microsoft’s earnings were released yesterday, so we thought we’d take a look at how Microsoft technologies including Azure are used in comparison to Amazon Web Services across time, technologies, and industries, according to Stack Overflow data.

How do the two cloud platforms compare? The Stack Overflow Trends tool shows the percentage of questions asked that have a particular tag (amazon-web-services or azure), and can give us a sense of each technology’s popularity since 2008.

It looks like they’ve both been growing consistently in their share of Stack Overflow questions. In the first few years of the site, each tag made up less than .1% of questions asked, but now they each make up more than .5% of new questions.

We can examine this in more detail by considering Stack Overflow visits over time, rather than questions asked. Our current traffic logs go back only to late 2011, but this does include much of the growth of the two cloud technologies. What percentage of question visits went to each tag within each month? 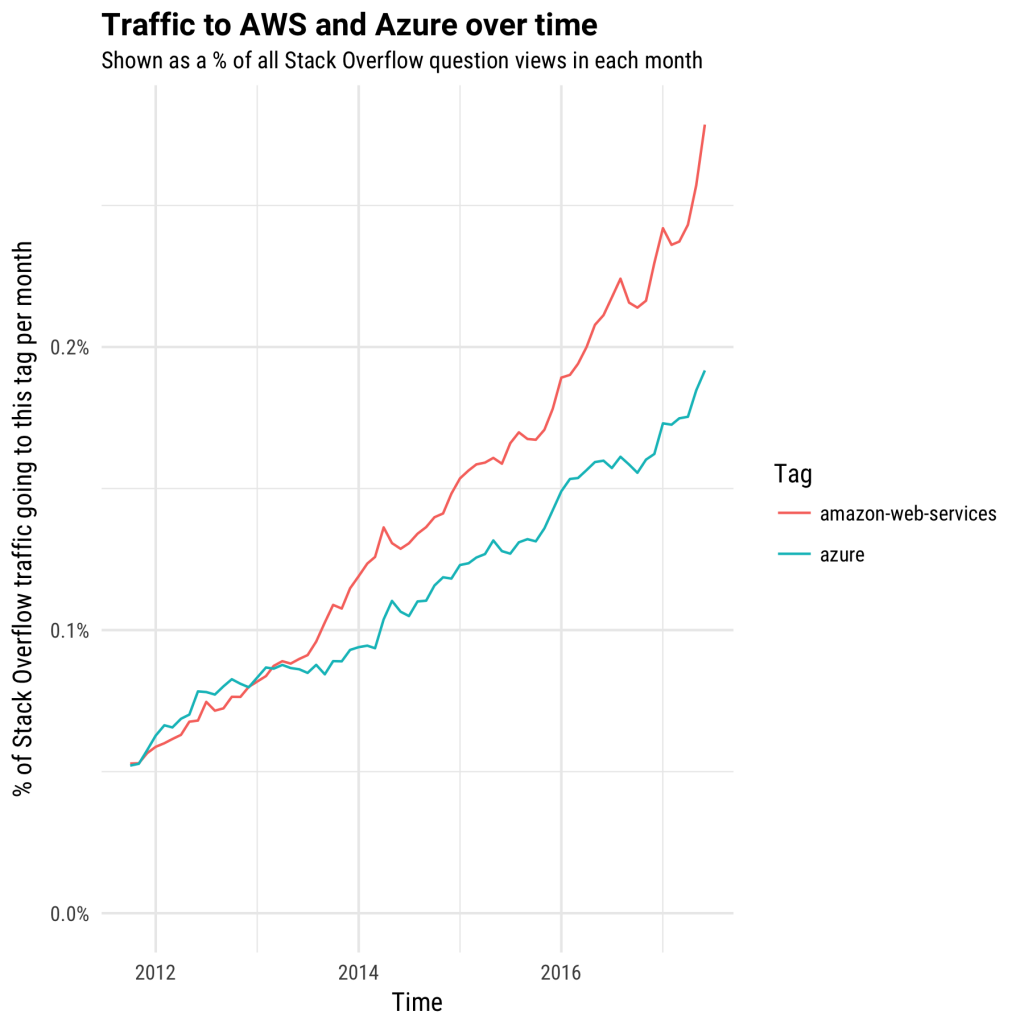 Both platforms have shown steady growth in the last six years, as a percentage of overall Stack Overflow question views. But it’s apparent that while the two platforms started at a similar level of traffic in 2012, AWS has grown faster.

This shows that while Stack Overflow Trends is a useful starting place to estimate a technology’s adoption, it doesn’t always tell the full story. In this case, the results are different because the average AWS question tends to get more visits than the average Azure question.

What might cause developers to choose AWS over Azure, or vice versa? One likely possibility is the language and technology stack they use: some languages and frameworks are better suited to a particular cloud platform.

We can get a sense of this by dividing developers into categories based on the tag they most visited, and considering the percentage of their traffic that goes to Amazon and Azure questions. 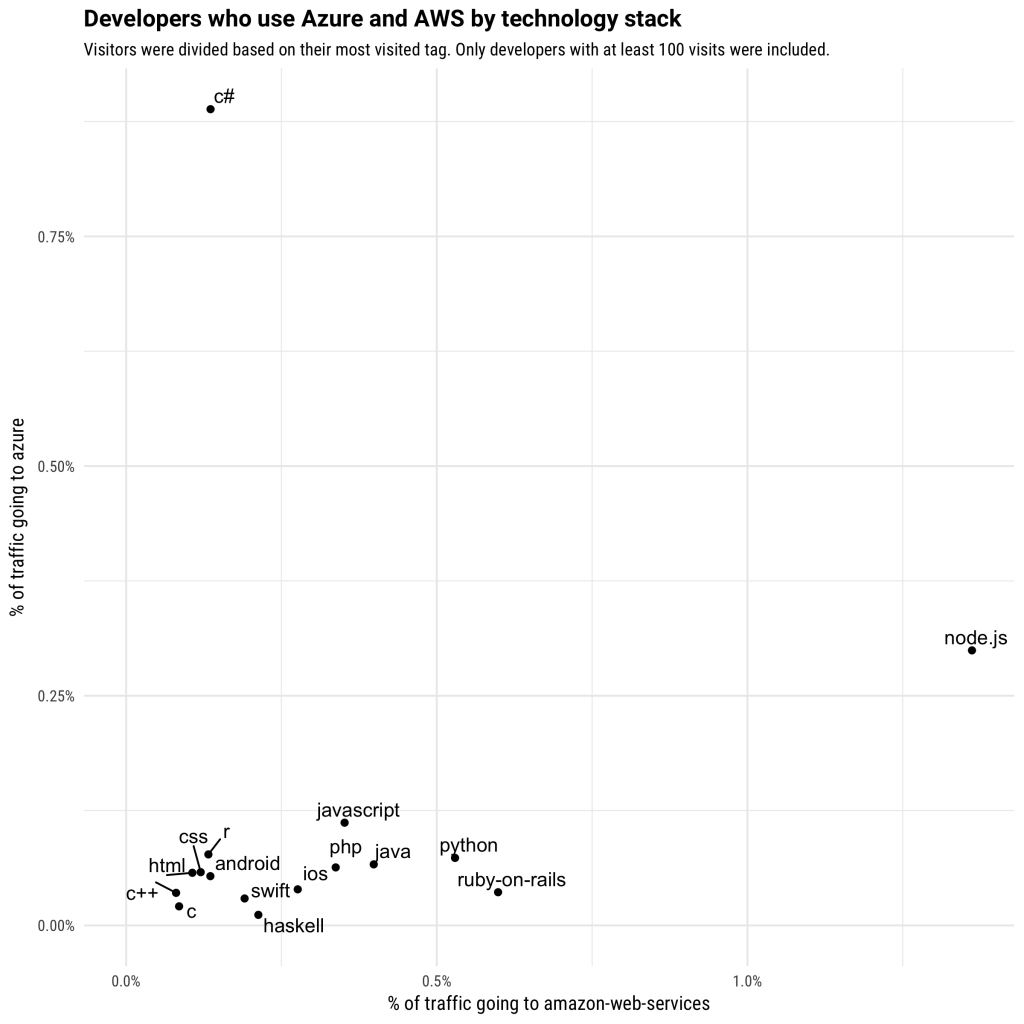 There’s a clear distinction: developers that use C# overwhelmingly choose Azure, while other developers use the platform to a much lesser extent. This makes sense, since Azure is a Microsoft product and is a natural choice for a web application in the Windows stack.

Developers who work with C and C++ were particularly unlikely to use either platform, which makes sense since those languages are rarely deployed on cloud applications. We can also see that developers who heavily visited the HTML tag tended not to visit cloud questions either; these likely represent front-end developers and designers who aren’t responsible for configuring cloud platforms.

Another factor that can affect a developer’s choice of platform is the industry they work in. What industries tend to choose one cloud platform over the other?

We can consider this question within the United States by matching IP addresses to companies, just as we recently did to analyze trends in government software developers. 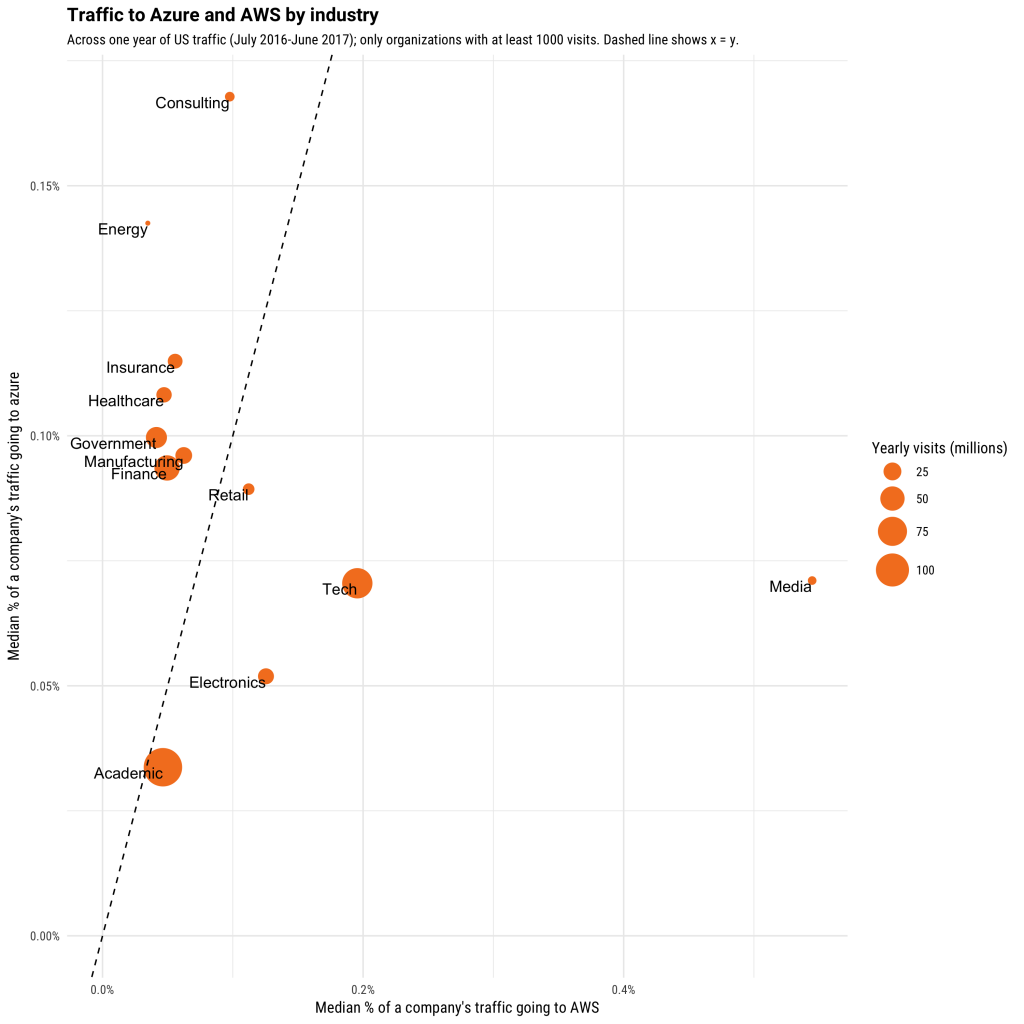 AWS questions may be visited more overall, but it looks like Azure is the platform of choice in several industries, particularly consulting and energy. Further analysis shows that these are the industries where the Microsoft stack is most popular. In contrast, AWS is particularly popular in the technology industry (such as software and web companies), and especially in media companies (including publishing and entertainment). You can explore the companies hiring AWS developers on our Jobs listings.

It’s also worth noticing that the “Academic” sector visits both cloud platforms the least out of all their question views. This category is generally made up mostly of students and researchers, and we showed in a previous post that these users visit a very different set of languages and technologies than the rest of the United States. (In fact, that post found that Azure was the single most underrepresented tag in questions asked from universities). This suggests cloud platforms aren’t widely taught in universities or used extensively in research, at least compared to technologies like Python and R.

Developers in different regions also tend to choose different technologies. Much as we compared developers in major cities, we can consider how questions about these two platforms are visited within each country. Here we’re examining one year of traffic (July 2016-June 2017, about 6.2 billion visits overall). 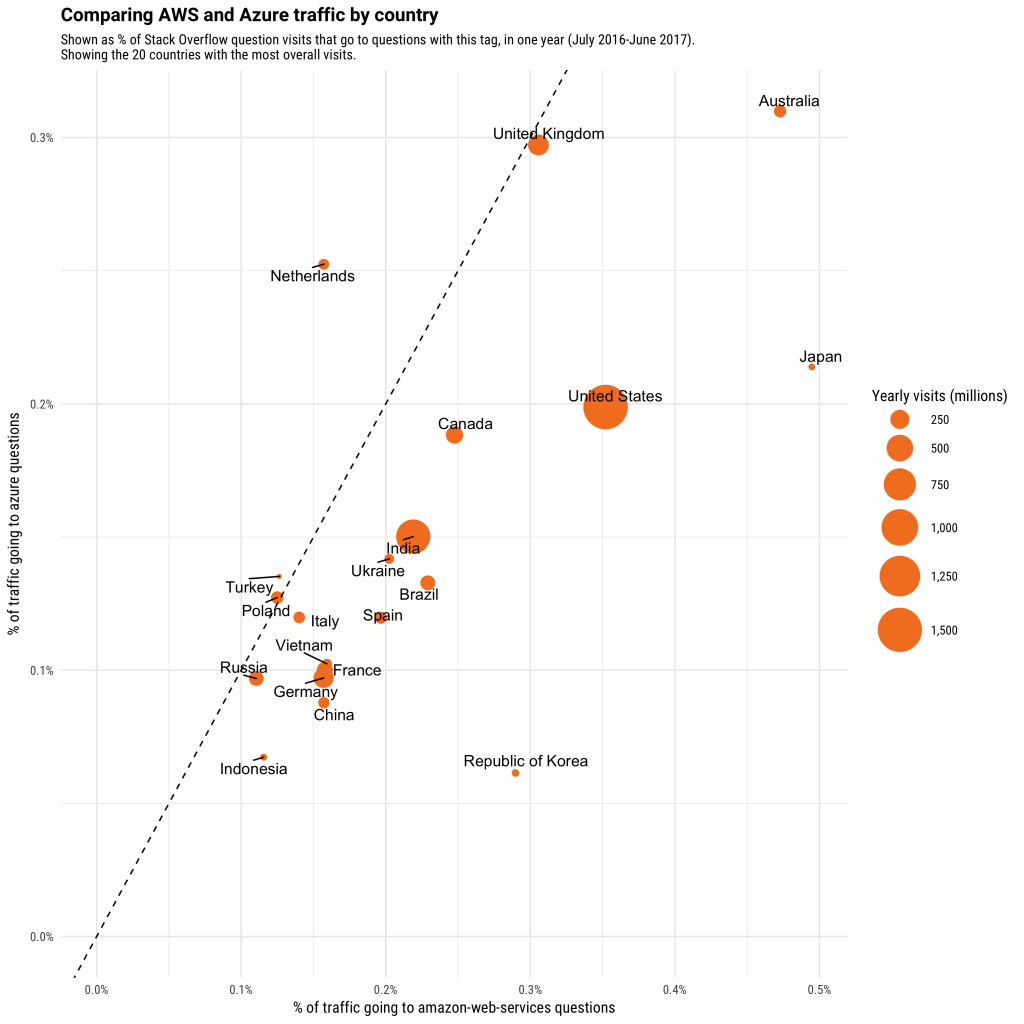 Countries differ substantially in how they visit these two cloud products, relative to the rest of their Stack Overflow visits. Countries like Australia, Japan, the UK and the US often visited questions about these these platforms, while countries like Indonesia, China and Russia visited them more rarely compared to other tags.

Most countries visited more AWS questions than Azure, though to different extents. One notable exception is the Netherlands, which visited about twice as many Azure questions as AWS questions. On plausible factor is that Microsoft has built a major data center in the Netherlands, which along with other investments in the region likely means there are disproportionately many Azure cloud developers in the country.