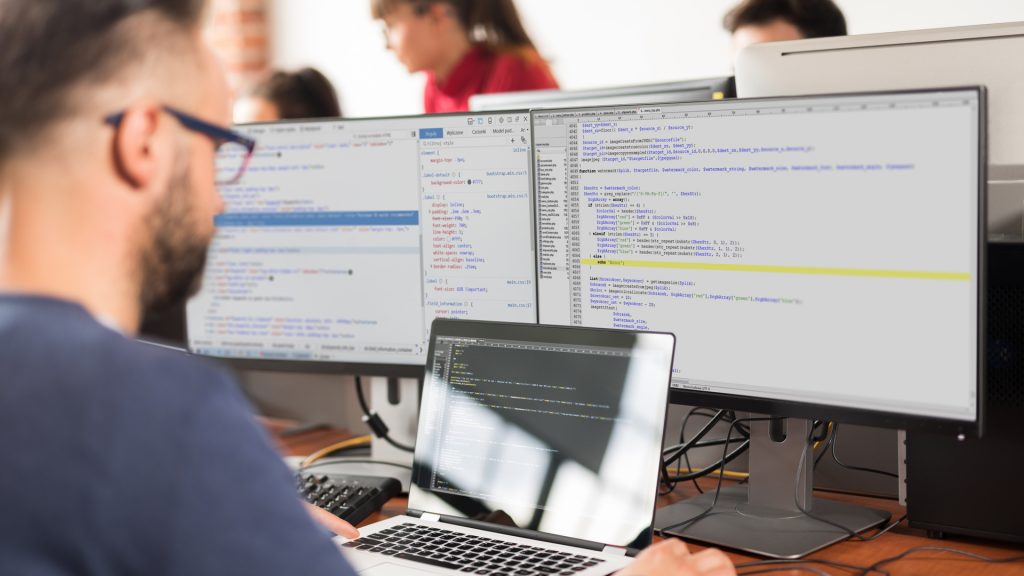 In a previous post, we used the Stack Overflow Trends tool to look at how technology usage in mobile development has changed over time. But we’ve often found that popular languages, platforms and technologies differ across cities and countries as well.

In this post we’ll explore where mobile development happens, and what these countries might have in common. We’ll look at Android and iOS, and pour one out for Windows Phone.

What countries have lots of Android development?

We geocode all of our traffic and know every question’s tags, so we can plot the percentage of traffic from each country that goes to questions with the Android tag. 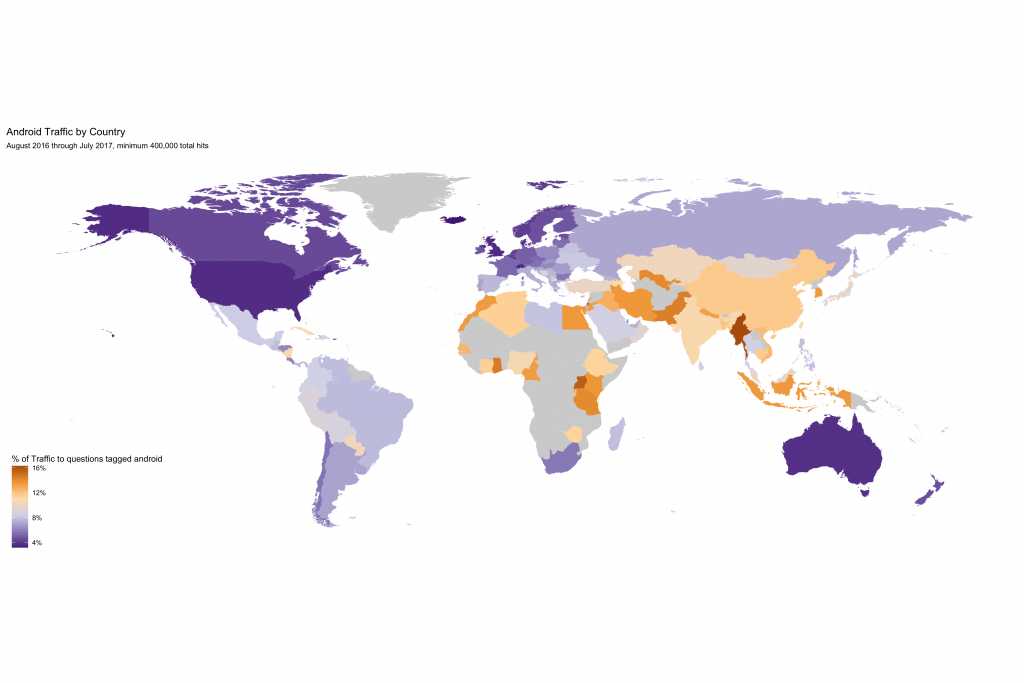 Android is decidedly less “hot” in the Americas, Europe, and Russia: it makes up only a small percentage (4-8%) of Stack Overflow question views from those countries. It makes up a much larger share (12-16%) of traffic in Africa, the Middle East, and Southeast Asia. What patterns could be behind this geographic distribution?

Android varies by GDP per capita

The World Bank Open Data set provides free and open access to global development data and statistics. We combined this with our traffic data to see if anything popped out. A number of indicators correlate with Android visitation, but GDP stood out as having the strongest relationship to Android development. 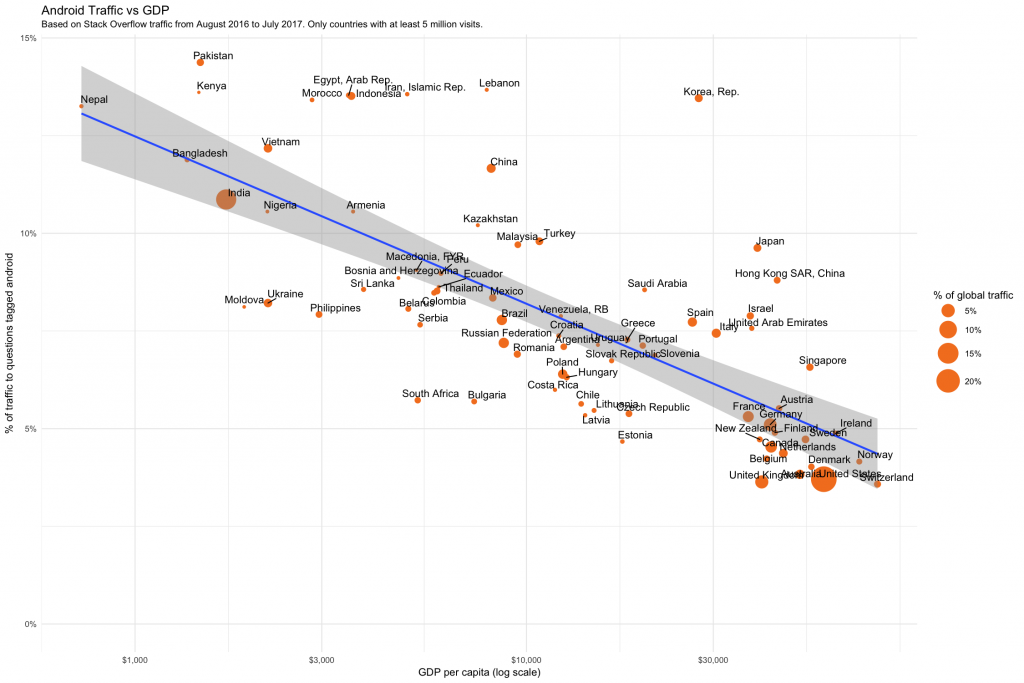 There could be many interlocking reasons for this trend. Maybe it’s because Android phones are cheaper, or that there’s substantial Android development outsourced to lower income countries. Our traffic data can’t really answer the why.

Let’s take a look at the other major mobile platform. Where is the iOS tag visited from, as a percentage of each country’s traffic? 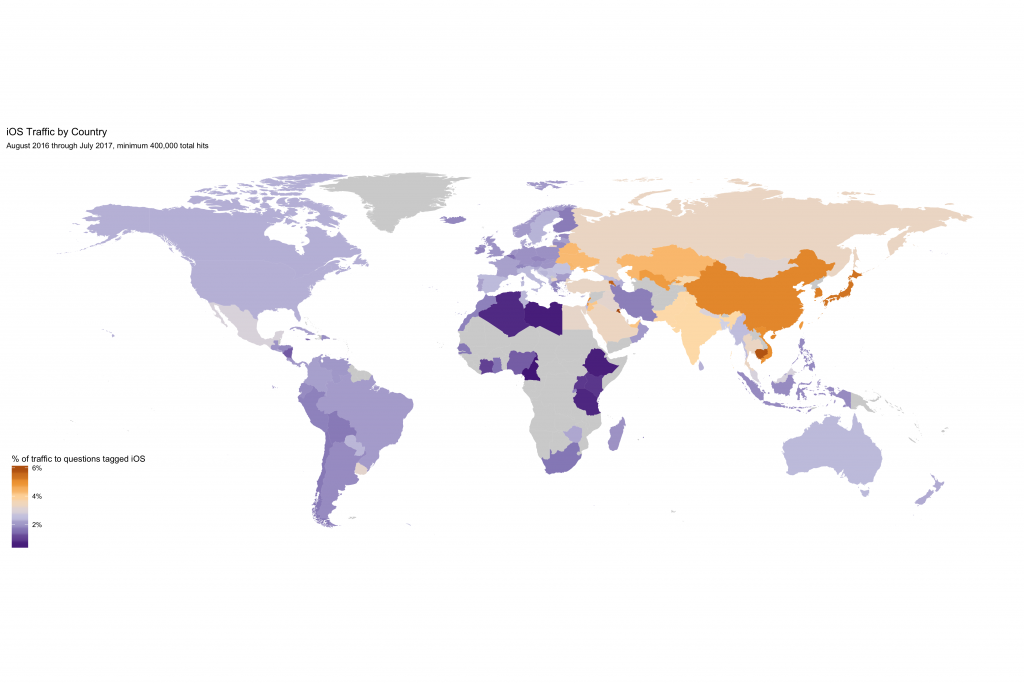 Again, pretty cool in the Americas and Europe, and warmer in Asia, particularly China and Japan. Interestingly, we can see there’s almost no traffic to iOS questions from Africa. Unlike Android, there’s no correlation, positive or negative, between iOS traffic and per-capita GDP. This suggests that the correlation between Android and GDP may not be driven entirely by the market share of the platform in each country.

We can combine the geographic traffic data into one plot by comparing Android and iOS traffic in each country, and an interesting picture emerges. 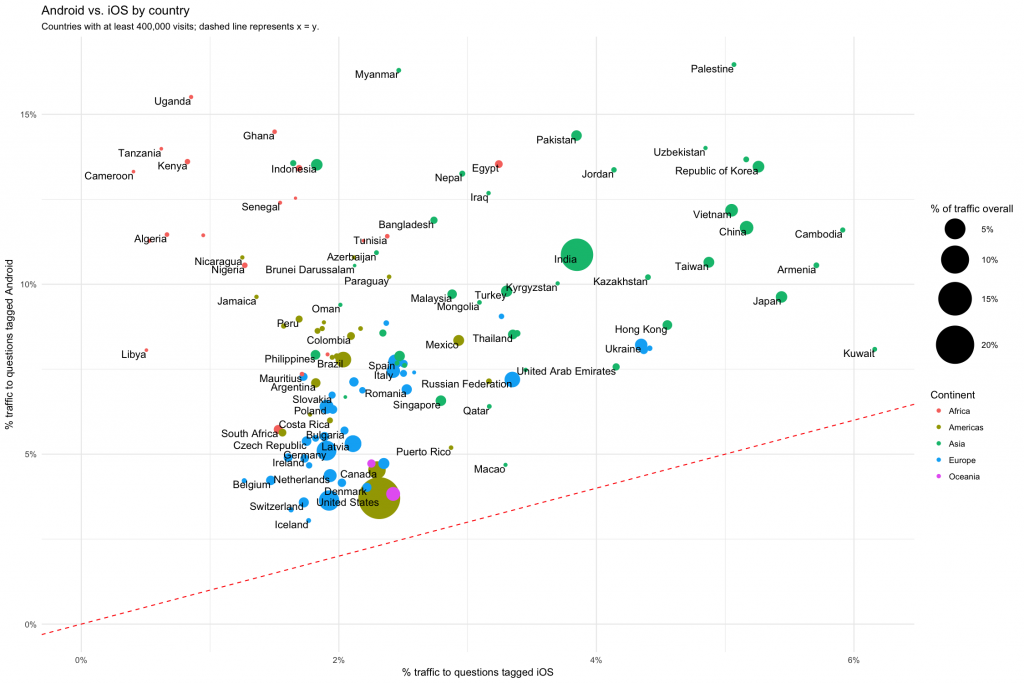 The first, less interesting, thing to note is that Android is more visited than iOS from literally everywhere. More interesting is that the Android/iOS traffic ratios cluster based on continent. On the lower left we have a tight cluster of American (olive) and European (blue) nations with relatively low levels of both Android and iOS traffic. Up and to the left of that we have a cluster of African (red) nations, which visit Android almost exclusively. We can also see a cluster of Asian (green) nations that develop a lot of both iOS and Android.

Throughout these posts we’ve been using Stack Overflow data to explore the world of software development across time and space. This is a complicated dataset with many dimensions (every country in every year has its own distinct technology profile), and it can be difficult to know where to start. Seeing these relationships between mobile development technologies and GDP gives us one piece of the puzzle. In future posts, we’ll be exploring more about how a country’s income relates to the technologies it uses, and how that can give us wider insights into the global software development industry.

In the meantime, wherever you are in the world, if you’re a mobile developer looking to take the next step in your career, here are some companies hiring mobile developers, and specifically iOS and Android developers, right now on Stack Overflow Jobs.

April 2020 Hey nineteen! Welcome to ISSUE #19 of The Overflow, a newsletter by developers, for developers, written and curated by the Stack Overflow team and Cassidy Williams at Netlify. We can’t dance together, but we can fill our heads with delightful information. This week, COBOL rides again, random sampling to determine infection rates, and… 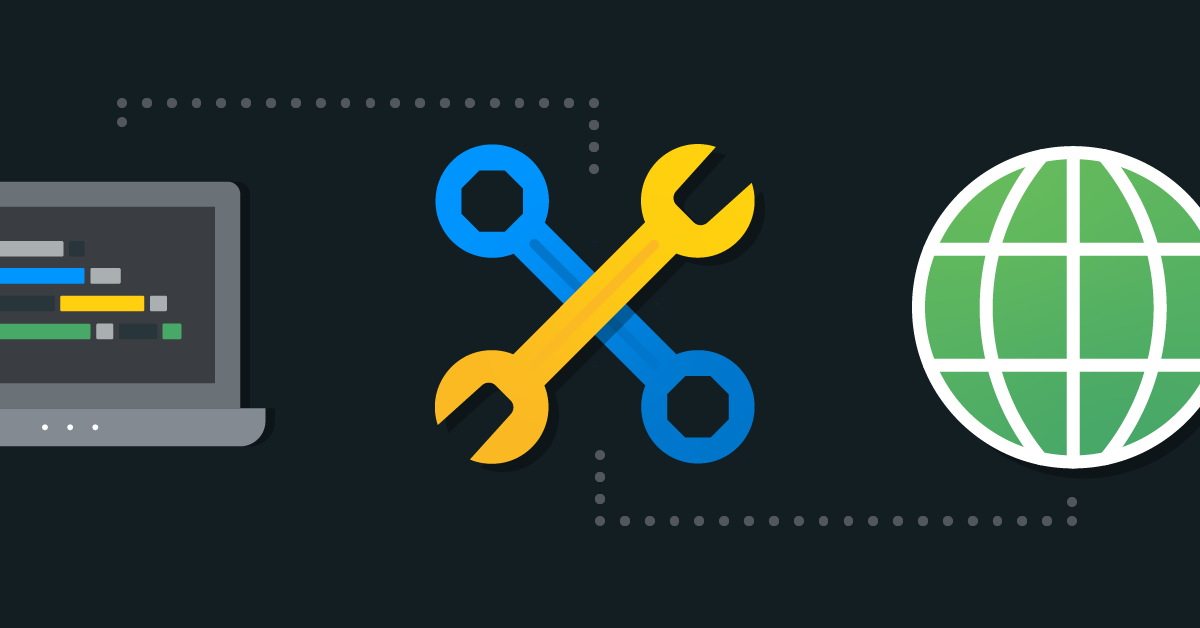 We're 100% remote, as of Monday. And one of the critical tools that helps us work securely is our VPN. This article covers how we made our decision and best practices to follow.