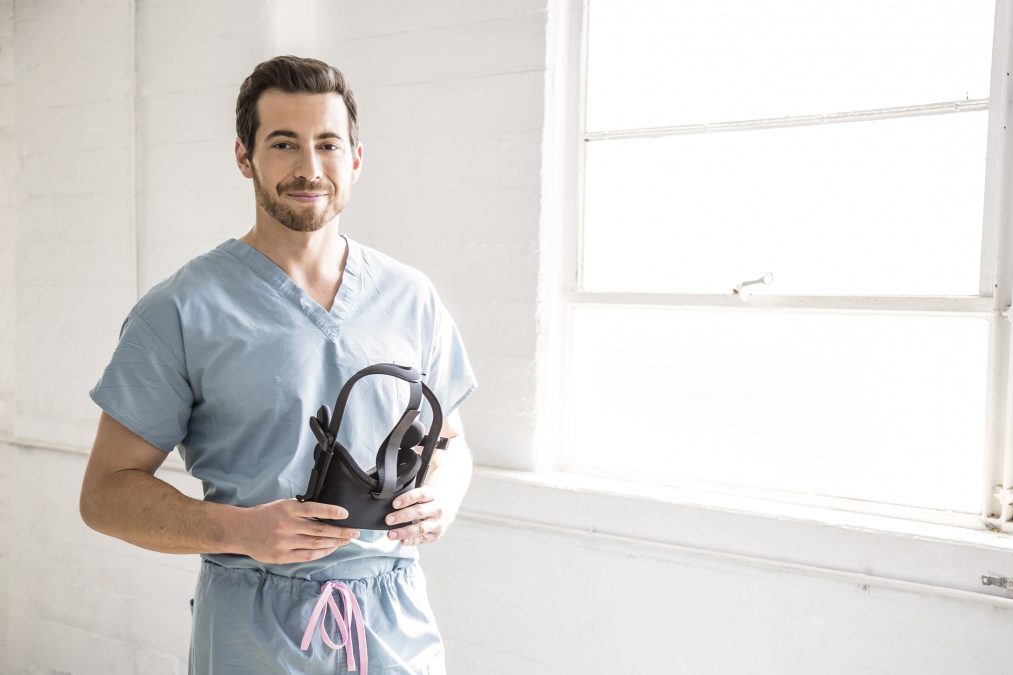 Justin Barad had an unusual path to a medical career. He studied biomedical engineering in college, but after graduation found himself working in the video game industry. “I was looking for a way to combine the two, but I did not really know how,” Barad recalled. When a mentor suggested that the only way to find a problem worth solving was to actually work in the field and experience the pain points first hand, Barad took his advice and went to medical school at UCLA. “It was during this time that I experienced firsthand what I think is the biggest problem facing healthcare today: how we train and assess our surgical care providers.”

During his medical training, Barad personally experienced the growing lack of practice time available to most aspiring surgeons. Studies confirm an increasing number of graduates are unable to operate independently. At the same time, opportunities to practice in the OR are declining as well. He knew this issue was one he wanted to tackle. Luckily, his detour into the video game industry put him in a unique position to look for unconventional solutions.

At the time, one of Barad’s major passions outside of his medical career was virtual reality. He spent a lot of time playing and building in virtual environments and subsequently realized that a VR environment would be the perfect place to practice complex surgical techniques. His early endeavors were simple, solitary experiments. “I just started playing around with Unity, and built the first prototype myself.” It was only after he teamed up with Matt Newport, a software engineer with experience at major game studios like EA and THQ, that his vision began to coalesce. The pair built a prototype that demonstrated how to train to use surgical instruments on virtual bone. Shortly after, Barad and Newport founded Osso VR as CEO and CTO respectively.

VR had a number of appealing qualities in this market, namely the ability to use consumer-grade devices, like Facebook’s Oculus line, in order to lower costs. Furthermore, a single instructor could provide training to a large group simultaneously, even if the students were spread out geographically across the world. The team won the Innovation Award at the 2016 GPU Tech Conference in Silicon Valley and was able to land its first round of investment the same year. Today, its product is used in residency programs including at Columbia University, David Geffen School of Medicine at UCLA, and Harvard Medical School and Hospital for Special Surgery. Recently, Osso VR announced a partnership with their first European facility, Newcastle Hospital.

A cheaper, better way to train and assess surgeons

Along with a dearth of training, doctors today are entering an environment that is constantly evolving. Senior staffers hiring at modern medical facilities often assume new recruits will need to learn on the job, as there are many tools and techniques just coming to the market. “During one interview, I was asked to play an operation board game; that’s about as close as they got to assessing skill levels,” said Barad. This trend of minimal training is becoming more widespread.

While previous generations were able to participate in at least one operation per day, recent research indicates new trainees can only participate in a maximum of two or maybe three operations per week. VR is one solution that can help offer more opportunities for training. “This is a way for students who previously had no way to practice, to experience surgery in the OR environment. We are currently working towards blind tests to show that these students perform better than those who’ve had no VR training.” Barad tells us.


VR is also useful for experienced surgeons who want to train in emerging surgical procedures. Medical procedures are evolving quickly, but the training is not. Barad knew this was a problem he wanted to fix. Osso VR is used in eleven countries and has partnered with 20 residency programs. “We are proud that we do not only train thousands of surgeons each month, but we are also able to support smaller markets that would often get overlooked by innovation.”

Osso VR partners with the Pediatric Orthopedic Society of North America to create training for pediatric orthopedic surgeons helping children with complex hip conditions. Barad is hoping to see more knowledge transfer and mentoring from domain experts all over: “Think of all the experts that needed to be flown around the globe to train their peers on methods. Now up to 10 of them can meet in a remote operation room to talk with each other, practice surgeries – all in VR.”


Remote is built in.

Osso VR isn’t just enabling remote training for surgeons. It has been built from the ground up to work with virtual reality and remote employees. “We are a remote company from the ground up,” says Barad. “I think many companies these days offer remote as an option. But this results in situations where it is often office versus remote employees, two cultures. We designed all our systems and processes to function in a remote workplace.” Every employee at Osso VR has a VR headset, and not only do team meetings and whiteboard sessions happen in virtual reality, but colleagues also meet in VR for team-building exercises. “We play board games this way. It’s like meeting face to face, just more fun.”


Osso VR’s commitment to remote work means they are always on the lookout for the right tools to best enable their team. “At Osso VR, we know about the power of people working together online. After all, my co-founder and I met on a VR forum,” says Barad. Osso VR has a team of medical illustrators, designers, programmers, product managers, and sales reps spread over the US, Canada, and the UK. To help them all work together, the company relied on tools like Slack, Dropbox, JIRA, GitHub, Confluence, and G Suite. Despite all these options, the team initially couldn’t find a great solution for software documentation. Osso VR found itself with too many channels, employees confused about where to find information, and internal knowledge that was written down quickly becoming outdated.

“Once we provided this safe avenue for people to ask questions, it became truly visible, how much need there was for it. It was like opening the floodgates.” – Justin Barad, Founder & CEO, Osso VR

The struggle for good documentation is as old as time. “Matt [Newport], my CTO, has a lifetime experience in documentation never working quite as it should,” Barad said. So when the news of the Stack Overflow Teams launch arrived, there was no question about trying it. “We knew documentation was a problem, and still only once we provided this safe avenue for people to ask questions, it became truly visible, how much need there was for it. It was like opening the floodgates.”


Documentation on the go.

Barad and his co-founder instantly experienced the benefits. Rather than needing to task somebody with writing documentation, it now happened on the go. “Before, documentation always had a certain stop-start-nature to it. It felt like a separate task that takes time out of what you are doing, and yet is instantly stale. Ironically, the quality of the information we collect through Teams now is much higher than any prior attempts we’ve made with someone working on it full-time.” Stack Overflow for Teams also felt like the scalable solution right at the moment their business needed it. “It meant that all the tribal knowledge is now written down.”


“As someone that runs a company, it’s crucial to me to make sure I understand where the gaps are, and I don’t think it would have been uncovered without Stack Overflow.” – Justin Barad, Founder & CEO, Osso VR

For Osso VR, the new solution did more than allow more efficiency and ease in day to day collaboration. “It’s also improving the remote culture. As management, you might not even be aware of all the administrative questions that go unanswered in your organization, because employees don’t always flag the lack of an avenue for it,” says Barad. “As someone that runs a company, it’s crucial to me to make sure I understand where the gaps are, and I don’t think it would have been uncovered without Stack Overflow.”

Barad is convinced that remote work will be even more standard in the future.  As for the future of VR, he is aware that most employees will probably not start playing ping pong in remote VR meetings just yet, but as far as the medical world is concerned, he sees some exciting changes in the industry. “Osso VR’s focus is on training and assessment, but we see a lot of great work in patient-facing VR. Various psychological conditions like anxiety as well as pain management or rehab after a stroke – to name just a few very promising areas for application here. In many fields, it’s a complete life changer.”


Is your team building something great and ready to benefit from on the go documentation? Learn more about Stack Overflow for Teams.