Depending on how you count it, this is the 10th year Stack Overflow has been conducting its annual developer survey. The software industry has changed substantially over the last decade, but it’s also true that no single technology has been quite as disruptive, at least in the short term, as the public health crisis the entire world is experiencing right now.

The results of this survey reflect the opinions and experiences of nearly 65,000 developers. It’s important to note, however, that the survey was conducted in February, before COVID-19 had been declared a global pandemic, and countries across the world had gone into lockdown. We’re eager to share with the public some of the interesting statistics and changes reflected in this data, but we also understand that it’s important to be humble and realistic: a lot of the answers developers gave might look very different if the same survey were conducted today.

That said, there are plenty of exciting, interesting, and amusing highlights from the 2020 Developer Survey, so let’s dive in!

Rust held onto it’s spot as the most beloved language among the professional developers we surveyed. That said, the majority of developers who took the survey aren’t familiar with the language. If you want to understand what makes Rust so beloved, we have a deep dive on the topic for you here. TL;DR – Rust promises performance, control, memory safety, and fearless concurrency – an enticing combination, especially for systems programming.  It has also brought some interesting features – like affine types and hygienic macros – into the mainstream discourse.  Coupled with an open development process, it makes sense that many programmers (even those that don’t use it) hold Rust in high esteem.

At the number two spot, however, this year’s survey saw an interesting change. Last year, Python and Typescript shared the silver medal in a statistical dead heat. In 2020, TypeScript has surged in popularity, leaving Python in third place. If you want to hear more about Typescript, listen to our recent podcast with Jenn Schiffer of Glitch, where she explains why it’s become such a well-loved language.

TypeScript’s surge in popularity highlights Microsoft’s change of direction and embrace of the open source movement. As front end web and Node.JS codebases grow in size and complexity, adopting TypeScript’s static typing gives developers increased confidence in their code’s correctness.  TypeScript’s ability to be adopted incrementally means developers can dip their toes in, gaining immediate benefits, without having to undertake a risky porting project.  As a final sweetener, TypeScript polyfills many ECMAScript changes (like arrow functions, async, and classes) before they’re widely available in browsers.  We’ve been persuaded ourselves, as more and more of Stack Overflow’s JavaScript is actually transpiled TypeScript.

Python doesn’t have static typing (though it does have hints), which makes it the odd one out of the top 3. There may also be some ill will due to the much debated Python 2 to 3 migration. Let us know why you think TypeScript surged and Python slipped in the comments below. Check out the discussion at the 20 minute mark below for some more thoughts.

Site reliability engineers and DevOps specialists remain among the highest paid individual contributor roles. Almost 80% of respondents believe that DevOps is at least somewhat important, and 44% work at organizations with at least one dedicated DevOps employee. The reasons for this trend are no surprise. In an era of constant connectivity, users expect their apps and services to be available any time, and any place. And remember, this survey was run before widespread COVID-19 lockdowns – we’d expect DevOps to be even more important in a world where many teams have suddenly gone completely remote.

When asked what steps to take when stuck on a coding problem, 90% of respondents indicated they visit Stack Overflow. But hey, you already knew that. We also asked how people felt when they searched for a solution to their coding problem and found a purple link as the first result, indicating they’d been there before. Luckily, 52% of respondents said they felt a warm sense of recognition—“Hello, old friend”—while only 14% said they were annoyed to find they had forgotten they searched for this answer once before.

While finding a solution on Stack Overflow saves developers time, developers spend a lot of time working. More than 75% of developers said they work overtime at least occasionally—one to two days per quarter. 25% work overtime 1-2 days per week or more. As developers around the world shift to working from home, it’s becoming harder to draw boundaries between work and life, and to balance the two. We’ve got some advice on learning to work asynchronously, socializing with co-workers while you’re social distancing, and tips from some veterans of remote work here at Stack.

While we continue to make progress on diversity and inclusion, we still have a long way to go. This year’s survey was taken by just over 65,000 people. In our efforts to reach beyond the Stack Overflow network and seek representation from a greater diversity of coders, we advertised the survey less on our own channels than in previous years and sought ways to earn responses from those who may not frequent our sites. This approach included social promotion and outreach to underrepresented coders.

While we saw a lift in underrepresented groups, the difference in representation isn’t as large as we had hoped. There was an uptick in some race and ethnicity groups, while other races and ethnicities remained similar or decreased. Similarly, we saw a slight increase in female-gendered respondents, while non-binary, genderqueer, or non-conforming remained the same. We acknowledge that we have a lot of work to do, and the data we obtain in our annual survey helps us make changes and set goals to become more welcoming and inclusive as we go forward.

We will continue to work on improving our relationship with every kind of coder. In responses to this year’s survey, more than 15% of people said they find Stack Overflow at least somewhat more welcoming than last year. This continues to be one of our organization’s top priorities, and this news is encouraging.

You can explore more of the results in the detailed breakdown here. As always, we’ll make the anonymized results of this year’s survey publicly available under the Open Database License (ODbL) shortly.

Our annual developer survey is typically one of our most widely read releases. We know this is a challenging time for many people, and that folks around the globe are feeling a great disruption. We hope that Stack Overflow continues to serve as a valuable resource for you, and that this community can come together to support one another.

It’s that time of year again—we’re launching our 2020 Developer Survey. We love watching how this survey data evolves year-over-year, and this year we are focused on collecting insights from a sample that is representative of coders around the world.

Update 2/24: An issue with our email platform prevented our reminder email from reaching the majority of intended recipients, so we’re extending the survey deadline to Friday, February 28. This is your last last chance! We’re two weeks into collection of data for our 2020 Developer Survey. If you haven’t yet taken the survey, be… 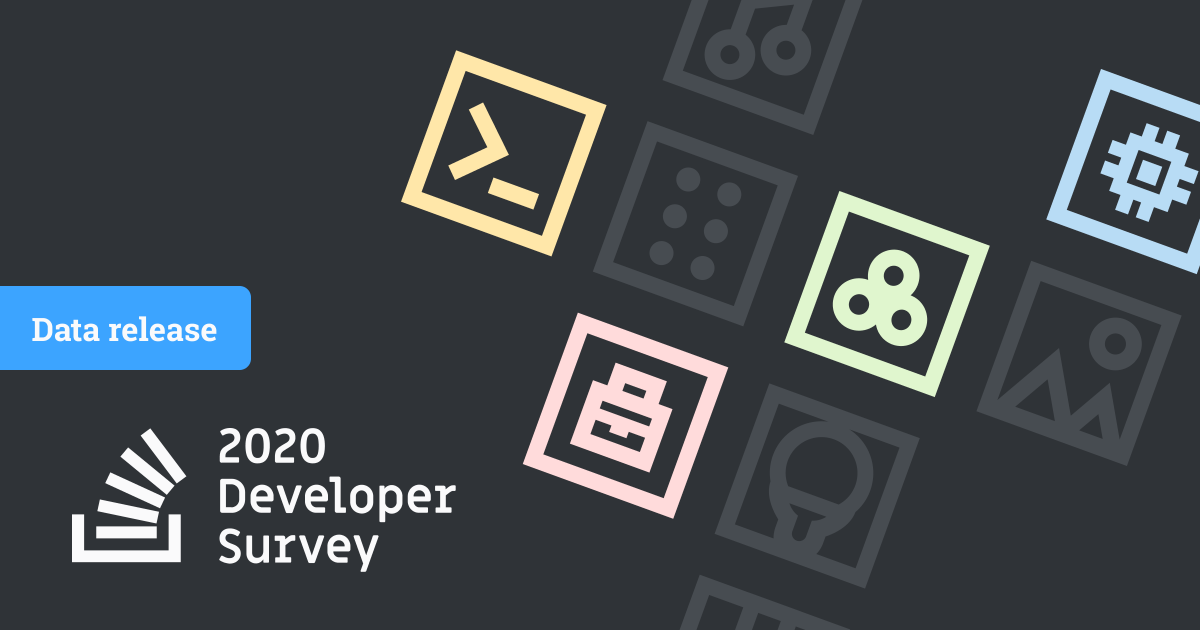 We love to learn about what moves developers and technical workers. That’s why each year, we ask the tech community about their jobs, their tools, and their aspirations. We also love open source, so since 2011, we’ve made the raw data set available for you to explore! We’re happy to announce that this year’s raw…

June 2020 Welcome to ISSUE #24 of the Overflow! Break into a two-four and read the newsletter by developers, for developers, written and curated by the Stack Overflow team and Cassidy Williams at Netlify. The survey results are in! Nullable types are out! Eye contact is back! From the blog The 2020 Developer Survey results…