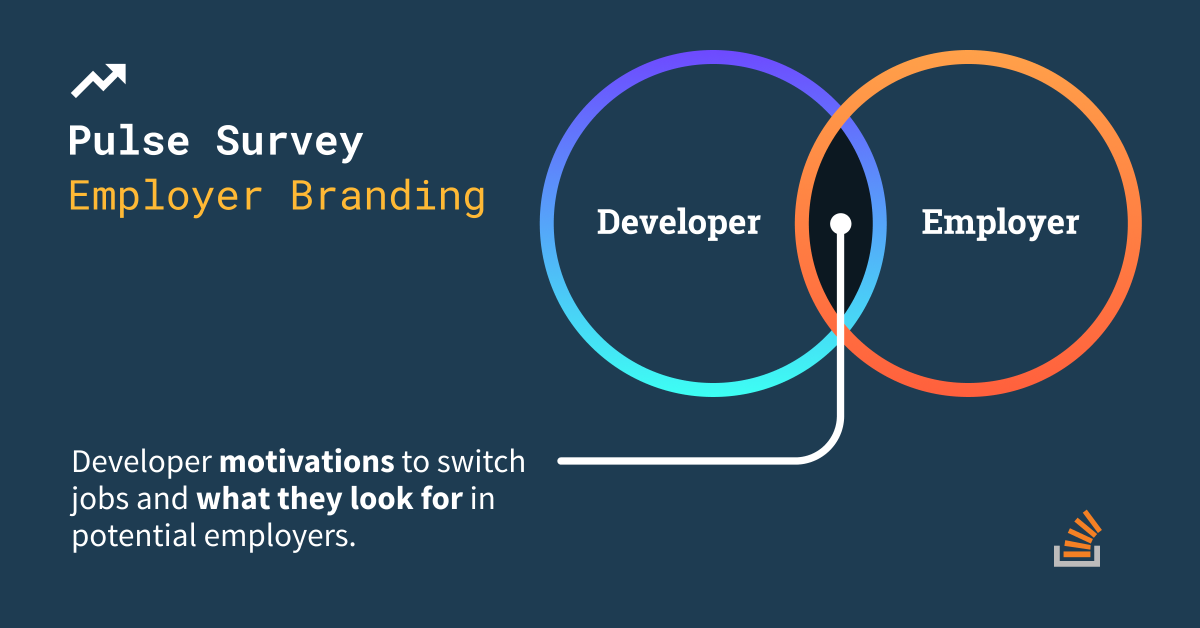 The competition for technical talent continues to heat up. It seems like every year is “hotter” than the year before. There are over 70,000 technical roles currently open, according to nearly every major job board we checked. Yet, nearly 80% of developers aren’t actively looking for a new job. However, over 50% are open to opportunities if they come their way. This all begs the questions top of mind for nearly every technical recruiting team in the world: How do you attract technical talent? What do developers care about when they evaluate new opportunities? We surveyed over 500 developers and the findings might surprise you.

Opportunities to learn and grow are critical to retaining talent. About 75% of developers are either actively looking for a job or open to new opportunities. When asked why, about 65% named salary as the primary reason, with 39% wanting to work with new technologies, 36% wanting better work-life balance, and 35% seeking growth or leadership opportunities.

Developers value flexibility and opportunities to learn at work

So what makes a current or future employer attractive? Over 53% want the developer experience to be prioritized at work, with salary transparency (41%) second, and opportunities to learn from people outside of their team third (40%). Developers are also looking for structure and connections when they join a company. Specifically, 35% find a structured onboarding process appealing, and 33% find it appealing if the employer makes it easy to find experts within the company.

On the flip side, companies become unappealing when flexibility and resources are limited. Specifically, nearly 60% would be turned off if they were blocked from accessing Stack Overflow, and 54% find companies unattractive when they don’t have the resources to feel confident in their work. In terms of flexibility, 56% of developers said they would be turned off if they were tied to specific working hours, and 50% said they find companies unappealing if required to go into an office.

To developers, reputation is everything

Whether passively looking at companies they might want to work for in the future or actively searching for a new job, developers tend to turn to the same four sources to find out what it’s like to work there: their personal network, media, company content like blogs and culture videos, and reviews. For those that come across companies that they might want to work for, they ask friends or family first and read media coverage about the company. And 26% of developers say they discovered a company for consideration from an ad on a website. For those actively on the hunt for a new job, they tend to look at company reviews first and media coverage second.

Yet working developers are split on whether they feel their company’s reputation is an accurate reflection of what it’s like to work there.

The power of the tech stack

Aside from getting another offer (36%), the primary reason developers pull out of an interview process is because they didn’t like the tech stack (32%). Considering that most developers are looking for opportunities to learn, this clicks. Other top reasons include a disorganized interview process (24%), odd interview questions (24%), poor employer reviews (24%), and not being able to find enough information about what it was like to work at the company (22%).

How do you make sure your stack isn’t something that turns candidates away? In our annual Developer Survey of over 83,000 developers, we did a deep dive into the most popular developer languages and technologies and what developers most want to work with. The most popular languages and frameworks are flexible. For example, Rust is the most loved language for the sixth year in a row, and Python is the most wanted language for its fifth-year—both crowd favorites because of their diverse applications developer-friendly features. Newcomer Svelte was the most loved framework in its first year entering the list, and React is the most wanted, coveted by one in four developers.

Whether it’s workplace policies or the tech stack, developers crave flexibility and opportunities to learn something new. And if they aren’t finding it in their current role, they are likely to look elsewhere. With over 70,000 technical roles currently open and 20% of developers actively looking for new jobs, we don’t see talent wars tempering anytime soon. And we anticipate other tech roles to follow suit.